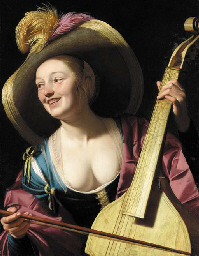 A young woman playing a viola da gamba signed 'GHonthorst' (GH linked, upper right) oil on canvas 335/8 x 261/8 in. (84 x 66.5 cm.) PROVENANCE (Probably) sale M. Tripp and others (paintings owned by Mrs. Carpenter); Sotheby's, London, 4 February 1931, lot 80. with P. Tiocca, Paris, 1936. L. Hauser, Paris; Sotheby's, London, 23 June 1937, lot 53b (to Duval). M. van Gelder, Uccle; Phillips, London, 7 December 1993, lot 79. with P. de Boer, Amsterdam. LITERATURE A. von Schneider, Caravaggio und die Niederl„nder, Marburg/Lahn, 1933, p. 135. G. Isarlo, Caravage et le Caravagisme Europ‚en, Aix-en-Provence, 1941, p. 42, as Jan van Biljert. G. Isarlo, 'Les d‚buts de Vermeer', Connaissance des Arts, XLVIII, 1956, p. 166, illustrated. J.R. Judson, Gerrit van Honthorst. A Discussion of his Position in Dutch Art (Utrechtse Bijdragen tot de Kunstgeschiedenis, VI), The Hague, 1959, p. 222, no. 152. H. Braun, Gerrit und Willem van Honthorst, Ph.D. dissertation, G”ttingen, 1966, pp. 208-209, no. 68. C. Moiso-Diekamp, Das pendant in der holl„ndischen Malerei des 17. Jahrhunderts. Europ„ische Hochschulschriften, XXVIII, Frankfurt-am-Main, Bern, New York, XL, n.d., pp. 345-346. J.R. Judson and R.E.O. Ekkart, Gerrit van Honthorst 1592-1656, Doornspijk, 1999, no. 224, pp. 178-179, pl. XIX, fig. 125. NOTES Honthorst trained in Utrecht with Abraham Bloemaert; he travelled to Rome and established himself there by 1616. Because of his interest in candle-lit night scenes, he was known in Italy as Gherardo della Notte . By 1620, Honthorst was back in Utrecht and entered the guild there in 1622. He worked both for private patrons as well as for the Counter-Reformation Church and later for the Danish king at Kronborg Castle, the Stadtholder in The Hague (the Oranjezaal at Huis ten Bosch) and for Charles I of England (the Banqueting House at Whitehall). Honthorst achieved both international fame as well as amassing a large fortune. Honthorst posed the same model, in the same costume with the same provocatively revealing d‚collet‚ in two other paintings both dated 1625. One is the Young Woman Holding a Medal in the Saint Louis Art Museum and the other is The Procuress in the Centraal Museum, Utrecht (see B. Broos, Great Dutch Paintings from America, 1990-91, pp. 291-94, no. 33, fig. 2). In fact, in the Utrecht painting the courtesan appears in the same pose as in the present painting (and same costume minus the straw hat but with the same flowers in her hair) and she prepares to strum a mandolin and not a viola da gamba. Because of this, there seems to be no reason to doubt that the present painting should also be dated to the same moment in Honthorst's career, that is, around 1625. It has been pointed out that these enticing young ladies, often playing musical instruments, are, in fact, strumpets. This is made particularly and unambiguously clear in The Procuress where a procuress points to the young man who offers the mandolin-playing girl money from his purse, all seen by the light of a single candle. Musical instruments had become by this time a conventional motif of brothel scenes; and the symbolism of their shapes, of their being touched, handled or played was not lost on contemporary audiences (see W. Franits, 'Emerging from the Shadows: Genre Painting by the Utrecht Caravaggisti and its Contemporary reception', Masters of Light; Dutch Painters in Utrecht During the Golden Age, 1997-98, particularly pp. 118-119). The courtesan in the present painting not only plays her viola da gamba with dexterity and precision but her laced bodice reveals to the spectator the fulsomeness of her breasts; even one of her nipples has announced its presence. However, the girl's wide toothy smile and her glance at the off-stage light source to the left also add greatly to the appeal of the image, both for 17th-century viewers and those of today.