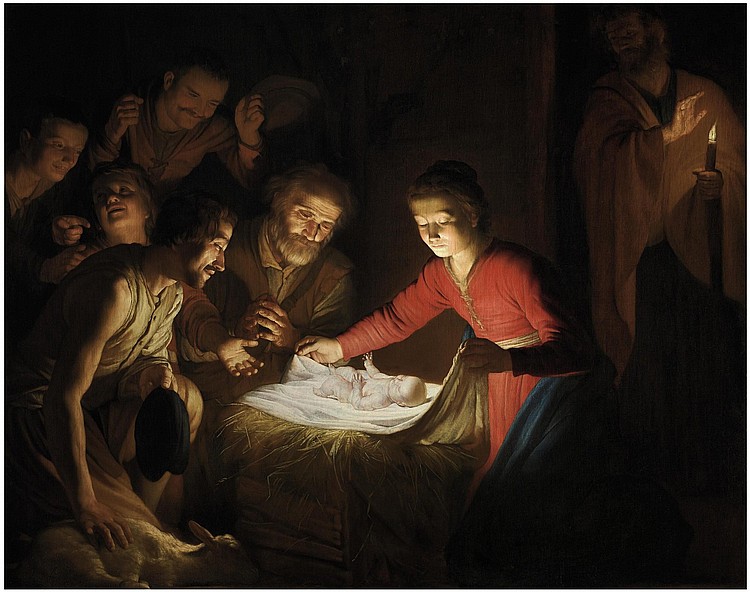 (Possibly) Frederick Henry, Prince of Orange (1584-1647), Noordeinde Palace, The Hague, where described in an inventory of 1632-33, 'Op het cabinet van Zijn Excellentie ... daerinne een schilderie, der herders Christus comen begroeten, door Honthorst gedaen' ('In the cabinet of his Excellency ... a painting in which the shepherds come to greet Christ, painted by Honthorst'); and by descent at Huis Het Loo to
William III of Orange (1650-1702), sold posthumously with a group of pictures from his collection; Amsterdam, 26 July 1713, lot 51, 'De Geboorte Christi bij de Herders, van Honthorst, kloek geschildert' ('The Adoration of the Shepherds by Honthorst, boldly painted'; 261 florins).
(Presumably) acquired by Edward Harley, 2nd Earl of Oxford and Mortimer (1689-1741), or his wife, Lady Henrietta Cavendish Holles (1694-1755), daughter of John Holles, 1st Duke of Newcastle, and his wife Lady Margaret Cavendish, daughter and heiress of Henry Cavendish, 2nd Duke of Newcastle; recorded in the inventory of the pictures at Welbeck compiled for Lady Oxford by George Vertue in 1747, p. 31, no. 5, in the lobby to the Lady's Apartment; and by descent through her daughter,
Lady Margaret Cavendish Harley (1715-1785), wife of William, 2nd Duke of Portland; recorded at Welbeck in a small room near the Hall by Dr. Waagen (1857), in the 1861 inventory (no. 328), and on the east wall of the Underground Gallery by Fairfax Murray (1894).

Documented in the Portland collection since the mid-eighteenth century and admired by Dr. Waagen on a visit to Welbeck in 1833, it is surprising that such an important work by Honthorst has eluded the attention of latter-day scholars and was not known to Richard Judson at the time of the publication of his 1999 monograph. This is one of the last major nocturnal paintings by Honthorst to remain in private hands and its apparent re-discovery constitutes a significant addition to the artist's oeuvre.

The picture can reasonably be dated to the early 1620s, shortly after Honthorst's return to Utrecht from a prodigiously successful sojourn in Italy that lasted around eight years. In Rome, under the influence of Caravaggio and his followers, Honthorst developed a speciality in painting dramatically illuminated nocturnal scenes, for which he earned the enduring nickname, 'Gherardo delle Notti'. His work attracted the attention of such important patrons as Marchese Vincenzo Giustiniani, for whom he painted the seminal Christ before the high priest (London, National Gallery); Cardinal Scipione Borghese, who commissioned him to paint the altarpiece of Santa Maria della Vittoria (still in situ); and, in Florence, Cosimo II de' Medici, Grand Duke of Tuscany.

By the time Honthorst left Italy his fame was well established and had already preceded him to Utrecht where he was fêted on his return in July 1620 (see R. Judson, Gerard van Honthorst, Doornspijk, 1999, p. 14, for an account of his reception in Utrecht). Not surprisingly, as Judson has attested, in the years immediately after his return, Honthorst continued to paint nocturnal scenes in the mode that had brought him fame in Italy. The present work develops a composition devised for the painting of the same subject completed in 1620, at the end of the artist's Roman period, for the Guiccardini chapel in Santa Felicità, Florence (now Uffizi Gallery, Florence). The religiosity of the Florentine picture is downplayed here by the ommission of the throng of cherubs overhead, which has allowed Honthorst to adapt the composition to a horizontal format. In both paintings, however, the grouping of the figures (and their numbers) around a central light source is analagous, and the protagonists are highlighted in the same way. Honthorst uses the light to accentuate the salient gestures and facial expressions of the stationary figures, thus placing considerable emphasis on the quiet, human interplay between them. The main focus is on the tender love and maternal pride elicited by the Virgin, who unveils her new-born child to the admiring visitors. Their reactions are measured with equal care: the deep reverence of the elder kneeling shepherds, the incredulity of the young boy on the left, caught in conversation with the man behind him, and the knowing, paternal empathy shown by the smiling man who doffs his cap.

Honthorst's visual sources for the Adoration of the Shepherds are resolutely Italian and the central idea of light emanating from the infant Christ in a nativity can be found in a number of Italian works that may have influenced the Utrecht artist. Judson has cited a number of possible candidates, the most significant of which might be Annibale Carracci's small Nativity on copper executed around 1590 (Paris, Louvre). In a composition with distinct echoes of this and Honthorst's Florentine Adoration, Carracci depicts the Virgin proudly lifting the drapery to show off the infant Christ to his admirers, with Joseph standing over her left shoulder holding a candle.

Judson argues that for the Florentine picture, Honthorst may have looked more closely at Jacopo Bassano, whose treatment of the subject in circa 1592 (Venice, San Giorgio Maggiore), employs rugged, true to life protagonists who may indeed have made a strong impression on the northern artist. In the present work, the kneeling shepherd with a tethered lamb echoes even more directly the foreground figure in Bassano's Venice Adoration, and it is noteworthy that a similar figure features in Johann Sadeler's 1599 engraving after Bassano in a print that could have been available to Honthorst in the Netherlands. In Rome, Honthorst may also have been influenced by first-hand experience of Rubens's version of the subject, the last great altarpiece of his later Italian years, painted for the Oratorians in Rome in the summer of 1608 (Fermo, Museo Civico). While Honthorst does not adopt the movement and grand rhetoric gestures of Rubens's figures, the emotional expression and dramatic lighting certainly resonates with Honthorst's vision.

Honthorst addressed the subject a third time for a picture dated 1622 (Cologne, Wallraf-Richartz Museum), in which the number of figures is reduced to five and the viewpoint advanced. The handling of the Cologne picture is slightly harder than in this example and the lighting slightly stronger, both characteristic of Honthorst's post-Italian style. On this basis, it is tempting to date the present work directly after the artist's return from Italy, in between the Florence and Cologne Adorations.

The Portland Adoration of the Shepherds is presumed to have been acquired by Edward Harley, 2nd Earl of Oxford and Mortimer (1689-1741) sometime between 1710 and his death in 1741, for Welbeck, where it is first recorded in 1747 in an inventory compiled by George Vertue for his widow. Although the picture is not mentioned among Lord Oxford's documented purchases (see Goulding, loc. cit., pp. xxix-xxxiv) it is perfectly plausible that this is the picture sold posthumously from the collection of William III of Orange at Het Loo, in a sale in Amsterdam on 26 July 1713, lot 51: 'De Geboorte Christi bij de Herders, van Honthorst, kloek geschildert' ('The Adoration of the Shepherds by Honthorst, boldly painted' - see provenance). Lord Oxford married a month after this sale on 31 August 1713 and Goulding's records show that he was already buying pictures in large numbers, many of them with religious subjects, by 1715. The picture sold in Amsterdam in 1713 has previously been linked by Judson to the Cologne picture but without substantive evidence.