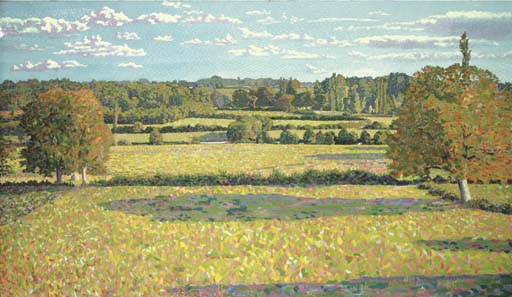 THE PROPERTY OF THE ART FOUNDATION OF DOCTOR GUSTAV RAU

The roots of Italian Futurism lie in Divisionism. Boccioni, Carrà, Balla, Russolo and Severini painted great works in a Divisionist style between 1907 and 1910 before launching on the dynamic path of Futurism. The most significant works of the period are on the grand scale and almost without exception these works are housed in major museums today. Like his peers, Severini aspired to painting works on the grand scale - during this period his mentor Balla was working on a major divisionist landscape project for the interior of the Villa Borghese while his friend Boccioni was working on his celebrated divisionist landscapes of industrial areas around Rome. Paysage à Civray is undoubtedly Severini's most adventurous and succesful large scale painting of this period.
When Severini arrived in Paris, he was by his own accounts penniless, lost and bewildered. He spoke almost no French and knew noone. All he did know was that Paris was the capital of the arts, the beating heart of Modernism. It was here that the avant-garde was making the most momentous discoveries. Paris had been at the forefront of artistic development for decades, and this situation showed no signs of abating. From Impressionism through Neo-Impressionism, from the Nabis to the Fauves, Paris had hosted the most historic breakthroughs time and time again. The radical atmosphere was one of constant discovery and creation. Perhaps most importantly, this was the period during which Picasso was secretly developing Cubism. Severini's intention in going to Paris, despite his lack of language and finance, was driven by his need to be at the cutting edge, at the centre of things, having pushed his discoveries in his Italian paintings to their limits. Severini needed more influences than were available in Rome, and had an unquenchable thirst for inspiration as well as a deep and immediate understanding of the various movements prevalent at that time. He was within a short time to become a sort of ambassador of the avant garde, transmitting first the pioneering ideas prevalent in Paris back to his colleagues in Italy, and later, as Futurism developed as a revolutionary movement in its own right, as its spokesman in Paris.

It is of great credit to Severini that within a short time he had become part of the notorious Bateau Lavoir group, a friend of Picasso and Modigliani.
This ease of making friends also threw him into contact with the young doctor Pierre Declide, from Civray. In 1908, Declide said to Severini, 'When things are going badly for you, close up your studio and come stay with me. You will always be welcome in my home' (G. Severini, The Life of a Painter: The Autobiography of Gino Severini, trans. J. Franchina, Princeton, 1995, p. 49). Although at first Severini did not take the offer seriously, he soon felt the need to leave Paris, and discovered that Declide's invitation was in earnest. The resulting three month stay in Civray, and the ones that followed over the next few years, were to prove central to the painter's development, allowing him breathing space and distance from the turbulent momentum of the Parisian art scene.
In the comfort of the Declide family's home, Severini prospered. He loved provincial life in France. Declide's father, a tailor, saw the terrible state of his wardrobe and rectified the situation by making him various suits and jackets, allowing him to be presentable enough to attend local balls and events, and truly enjoy himself. Severini was also enthralled by the landscape, which formed such a vivid contrast to Paris. Paysage à Civray, painted during the artist's first stay chez Declide, shows the rolling fields with scattered trees in such a way that there appears to be no central focal point. Severini has depicted a vista, and this deliberate strategy emphasizes the sense of space, of vastness, and of distance, accentuated likewise by the large scale of the canvas. The boldness of this vista is ineffably modern in itself, Severini presenting the viewer with a bucolic counterpoint to his friend Boccioni's iconic Workshops of Porta Romana of the same year.
Many of Severini's Italian colleagues had already worked on large canvases. However, this scale was a relative departure for Severini, not least because his poverty in Paris had restricted the size of canvas that he was able to buy. Daniela Fonti, in her catalogue raisonné of Severini's works, states that when the artist returned to Paris, he left almost all the works that he had executed in Civray so that he would be able to take Paysage à Civray with him. This reflects the importance of the work, and allows us to conclude that this must have been one of the works to which he was referring when he stated later that, 'My walks did not distract me from my work, nor from trying to solve my particular problems. In landscapes I was sometimes able to find a way to reconcile my ideas about pure and separated colors with those of a broad synthetic and extremely expressive form' (Severini, op.cit., 1995, p. 49). Certainly, the progression of the blocks of paint from the tiny Pointillist specks in the distance through to the slabs of pink and green in the foreground demonstrates precisely this reconciliation.
Severini was acutely aware of the momentous developments that were taking place in painting in Paris at this time. His easy charm meant that he knew many of the most important artists, and could see what was happening. Escaping to Civray allowed him some time to absorb everything, and also to paint on his own terms. It also allowed him to escape the thrall of Fauvism that was exerting itself over his fellow artists:
'I did not object at all to such explorations, nor did I consider them remote. Matisse may have already started to work in that direction, but I did not meet him or begin to appreciate his ideas until much later. I was interested in achieving a creative freedom, style that I could express with Seurat's and the Neo-Impressionists' color technique, but shaped to my own needs... My preference for Neo-Impressionism dates from those works. At times I tried to suppress it, but it always worked its way back to the surface' (Severini, op.cit., 1995, p. 53). In Paysage à Civray, we see this Neo-Impressionist idiom taken to bold new levels, mixed as it is with his knowledge of Divisionism. Severini's paints burst with a scintillating energy that predicts the Futurism that would soon come to the fore in many of his most recognized masterpieces. Here, he has truly used his subject matter to great effect, blending his own unique vision with his unique interpretation of Pointillisme. The influence of Pissarro that was evident in some other, more staid landscapes of the period has here been banished, giving way to this sweeping, absorbing and revolutionary painting. Paysage à Civray marked the consolidation of a technique and a way of seeing that would result in some of Severini's strongest pre-Futurist works, for instance Printemps à Montmartre of the next year.
Almost no landscapes, despite the artist's own reference to them, are known to have survived from this period, making Paysage à Civray a work of exceptional rarity. That it is his most accomplished of the known landscapes from this period is beyond doubt, showing Severini combining the lessons of Seurat's Neo-Impressionism with the pictorial energy of the avant-garde in a way that is evident only very occasionally in contemporary works. It is a reflection of the scarcity of works of this period that no significant Divisionist landscape by Severini from this period has appeared at auction since Printemps à Montmartre over fifteen years ago. Indeed, almost no significant Divisionist works from this important period by Severini or his colleagues appear on the market, not least because the majority of their masterpieces are in museums in Italy.