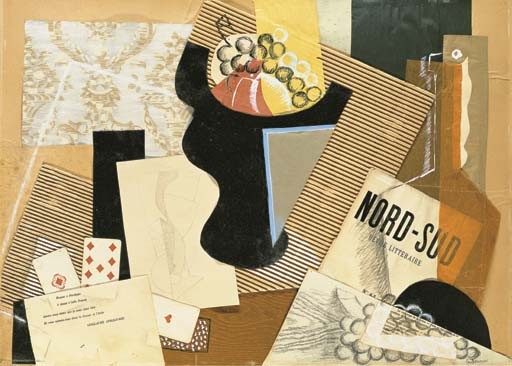 Romana Severini (the artist's daughter), Rome.
Acquired directly from the above by the present owner.

The closing years of the First World War incited an artistic revolution centred in Paris in which the traditional artistic values and constraints were being discarded in favour of Cubism. Executed in 1917, Nature morte à la revue littéraire "Nord-Sud", is a rare still-life collage by Gino Severini that dates from the early years of his Cubist period when he had essentially thrown off his Futurist mantle. Although Severini did not discard Futurism as an intellectual practice, he tailored it to his own individual needs, accommodating his interest - brought about by his contact with the pioneering Parisian art scene - in the Cubist aesthetic.

The static objects in Nature morte à la revue littéraire "Nord-Sud" constitute a network of elements revolving around Severini's life during this remarkable period that are centred on Paul Reverdy's magazine Nord-Sud. The cover of Issue 6-7 of the magazine appears with cards and grapes, alongside an extract from Apollinaire's poem 'A Luigi Amaro' and one from Alberto Savinio's poetic description of Italy, both printed in that issue of the magazine. Through these items, Severini manages to link his friends Reverdy and Apollinaire, two of the central characters in his Paris life. Severini emphasises the friendship between the artist and the two poets by including a drawing of his own amongst these collage references to his friends, placing himself in the same context even within the small universe of this still life. The inclusion of this picture of grapes appears to emphasise further the importance of Severini's cultural friendships at the time, as it may be a reference to Braque, his friend and onetime neighbour, whose still-lifes almost always included at least one bunch as a kind of informal signature.

Nature morte à la revue littéraire "Nord-Sud" is replete with objects of deep personal significance to the artist. Indeed, Severini's collages were always personal rather than commercial works. The personal nature of these works was made clear by their titles and themes, be they the Hommage à mon père, Hommage à ma mère or renderings of Paul Fort, his friend and father-in-law, and Filippo Marinetti, the Milanese Futurist, whose portrait was 'composed of pieces of cloth, printed matter, and a real moustache' (Severini, op. cit., 1995, p. 127). This last work exemplifies Severini's use of absolutely true and current materials in his works, apparent in the use of the Nord-Sud review in the present picture. This same concept is reflected by his Futurist belief in painting contemporary objects and subjects. Here, in his collages, Severini fits his feelings and friendship into a two-dimensional visual format by including the actual evidence of those friendships.

The Cubist style of this work, which reflects the classicism of Juan Gris, is essential to the full understanding of the interplay between the characters and objects within it. The table, a guéridon reminiscent of Gris' paintings, is the fictitious support for the various collage items displayed. Apollinaire and Reverdy were both great advocates of Cubism - Severini considered Reverdy's essay in his first issue of Nord-Sud to be the seminal text on the Cubist style. Cubism was therefore one of the foundations of the friendship that is celebrated in this collage. The table around which the attributes of the friends are scattered is therefore a pictorial monument to the Cubist forum where Severini, Reverdy and Apollinaire discussed, formulated and cemented their ideas.

Reverdy, a friend of Severini since his arrival in Paris, first published his magazine Nord-Sud in 1917. His intention was in part to create a publication printing the views and works of the group around Guillaume Apollinaire and to formalize the Parisian ranks of poets, artists and other intellectuals into a united band. Apollinaire's health, depleted after receiving wounds on the front line in the First World War, did not help Reverdy in his intention, but the periodical was nonetheless an arena for extremely avant-garde work and a tribute to its poet laureate and godfather. The title Nord-Sud was taken from the name of a Métro line in Paris that ran from North to South. This was a reference to the different groups of thinkers who gravitated around Montmartre in the North and Montparnasse in the South. Paul Fort, for example, commander-in-chief of the Parisian litterati, held court in a café on the corner of Boulevard Montparnasse and Boulevard Raspail. On the other hand, the majority of the artists associated with Cubism lived in various buildings in Montmartre.

Nord-Sud was a title that had special significance for Severini with regard to his friend Apollinaire. Many years before the magazine's inception, Severini had painted the Nord-Sud train itself in the 1913 picture of that name. This painting had been much admired by Apollinaire during its execution, lending extra resonance to the title choice of Reverdy's publication, and more importantly to the magazine's inclusion in the present picture. After Apollinaire's death in 1918, Severini donated the 1913 painting to a fund organized to raise a monument to the poet but Paul Guillaume, the art dealer organizing the fund, died leaving it in disarray, and the picture disappeared only to resurface years later in the hands of a Milanese dealer.

In Nature morte à la revue littéraire "Nord-Sud", Severini celebrates the intellectual life of this pioneering period by deliberately assembling the flotsam of his age in such a way as to make the era a character in its own right. All of the people involved in Severini's collage were, in Severini's own more flexible interpretation of the word, 'Futurists' - people interested in the present and future, but not the past. They were riding the crest of their moment, shaping the thoughts that would reverberate through the coming generations, especially in art. Severini was never as militant in his Futurism as his counterparts in Italy, and it is a reflection of the subjective, emotional content of this work, of his intention to express something deeply personal, that there is late nineteenth-century wallpaper in the 'background' and a 'wooden' foreground. Nature morte à la revue littéraire "Nord-Sud" is a portrayal of an imagined table, an altar to his friends, but that altar itself is domestic and honest. This domestic framework displaying Severini's cameraderie is emphasised by the fruit and bottle on the table, and more so by the cards. All these effects combine to invoke the impression of a warm, informal interaction around the table, perhaps with Apollinaire, Reverdy and Severini playing cards, drinking, and showing each other their writings and drawings. The contents of the still-life appear to be the remnants of a cosy evening amongst friends, but in Severini's emotional imagination they have taken on the status of a relic, each element representing and reinforcing their bonds of friendship.