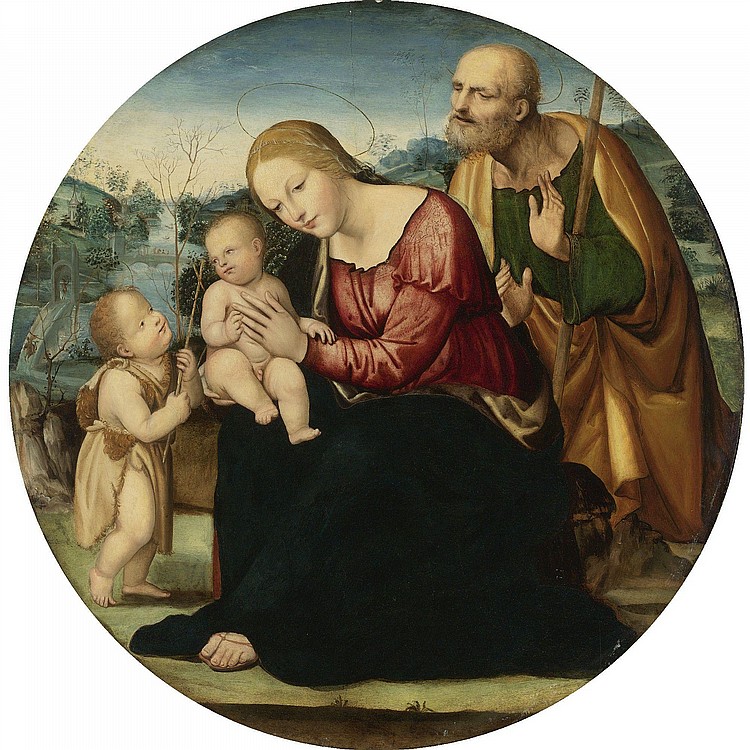 GIOVANNI ANTONIO BAZZI, CALLED SODOMA VERCELLI 1477 - 1549 SIENA THE HOLY FAMILY WITH THE INFANT BAPTIST IN A LANDSCAPE tondo, tempera and oil on panel diameter: 30 in.; 76.2 cm.

The preeminent artist working in Siena in the opening decades of the cinquecento, Sodoma has remained a somewhat mercurial figure to most modern connoisseurs. This is in no small part due to Vasari's assesment of his career, which appears to have been tainted by the writer's personal animus against Sodoma's character. Nevertheless, he found an avid and enthusiastic audience in his adopted city of Siena, working for the most important religious and private patrons, and was only rivaled late in his life by the younger painter Beccafumi.

This impressive tondo is an early work of Sodoma, painted before he left Siena on his first trip to Rome in 1508. The artist produced a small number of paintings of this format during the years of 1502-1508, a type that had remained popular with Tuscan patrons; indeed, a document of 1506 records the artist's purchase of round panels for just this purpose.(1 )Stylistically, the present panel displays the varying artistic influences of Sodoma's early career, not only the marked Umbro-Tuscan character of the Madonna and the Infants Christ and Baptist, but the stonger, much more naturalistic physiognomy of Saint Joseph, unimaginable without the artist's exposure during his training in northern Italy to the works of Leonardo da Vinci. Francesco Frangi (see Literature) dates the present panel to circa 1505-8, when Sodoma was working on one of his most important youthful commissions, the frescoes for the Abbey of Monteoliveto Maggiore, near Siena. The artist had been charged with the completion of a series of scenes of the life of Saint Benedict which Luca Signorelli had abandoned about a decade previously, and such an important project which placed him on par with a famous older and well established master clearly demonstrates the esteem in which he was already held.

Other tondi by Sodoma have been dated to about the same time by scholars, and provide a useful comparison to the present work. A Madonna and Child with the Infant Baptist, Saint Joseph and Two Angels (formerly Holfold Collection, London) has been dated to about the same time, and in his analysis of the present panel Angelo Tartuferi notes the affinity of the Madonna in that picture to the same figure in the present work (particularly the upper torso, see Literature).(2 )Another Madonna and Child, formerly in the collection of the Early of Wemyss, Gosford House, Haddington, Scotland has also been dated to this moment. Tartuferi (op. cit., p. 94-95) also compares the present panel to a depiction of Charity (formerly Kaiser Friedrich Museum, Berlin, now destroyed) where the treatment of the landscape and the figure of the Baptist are very similar.(3)

1. In the ledgers of the monastery of Monte Oliveto Maggiore, the steward or Cellararius of the abbey records these expenses on behalf of the artist, noting in November 1506 "Et più a di 27 november, lira una hebe da me Cellarario contanti per dare ad uno d'uno tondo di legno." and again in December "Item a di 23 dicembre, hebe ditto Giovanni Antonio lire cinque contanti in cellereria quando andò a Sena per li denari de li tondi" (see R. H. Hobart Cust, Giovanni Antonio Bazzi hitherto usually styled 'Sodoma', London 1906, p. 278).
2. For an image of the ex-Holford tondo, please see Tartuferi op. cit. p. 94, or B. Berenson, Italian Pictures of the Renaissance: Central Italian and North Italian Schools, vol III, London 1968, fig. 1530). Another larger tondo of the Madonna and Child with an Angel and Infant Baptist is in the Pinacoteca, Siena (inv. 512), which was recorded in the Convent of Lecceto by 1812, and has been dated to circa 1505 by P. Torriti (see La Pinacoteca Nazionale di Siena, Genoa 1990, p. 358, reproduced).
3. See Tartuferi, op.cit. p. 95.