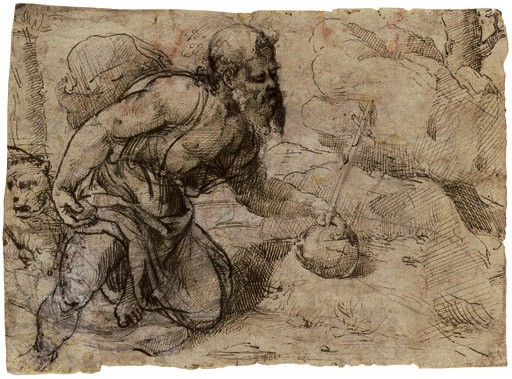 Poughkeepsie, Vassar College, and elsewhere, The Katalan Collection of Italian Drawings, 1995-96, no. 1.

An important addition to Sodoma's graphic oeuvre, this preparatory sketch for his painting of the same subject at the National Gallery, London (fig. 1) is revealing of the artist's creative process. Probably executed at an early stage of the composition's evolution, it demonstrates the adaptations he made to St. Jerome's pose and the landscape background between this preliminary drawing and the final, painted composition. These changes are most evident in the figure's right leg, which in the drawing is bent back slightly and foreshortened. However, a few quick strokes of chalk almost perpendicular to that leg show that the artist was already thinking of bending the Saint's knee all the way back as it appears in the painting. Elements in the background were juxtaposed, with the rock formation in the right of the drawing moved to the left side of the painting: the same silhouette now transformed into trees, replacing the billowing cape seen behind the figure in the drawing. Other changes were also wrought from the drawing to the finished painting such as the position of St. Jerome's hands, the location of the skull and the direction of the lion's face.
All of these changes are typical of a working drawing by the artist and are also evident in other examples from the small group of drawings given to Sodoma. A drawing of the Resurrection at the J. Paul Getty Museum, Los Angeles (G. Goldner and L. Hendrix, The J. Paul Getty Museum: Catalogue of the Collection, European Drawings, II, Los Angeles, 1988, no. 46) that is preparatory for a fresco at the Palazzo Pubblico in Siena is not only identical in technique - with the same heavy black ink outline of the figure, reworking of the left knee and vigorous black chalk under drawing - but is also evidence of the same process. The pentimenti in the poses is done in two media, black chalk and black ink, with the ultimate pose reaffirmed with a strong black ink outline. The black chalk sketch on the verso of the Saint Jerome sheet can be compared to Sodoma's Madonna del Corvo at the Uffizi. Another drawing by Sodoma at the Musée de Rennes shares the same treatment of the hair, drawn in thin, curly strokes, as well the same combination of parallel lines, cross-hatching and curving strokes to define the anatomy of the figure (Rennes, Musée de Rennes, Disegno: Les dessins italiens du musée de Rennes, 1990, no. 15).
Perviously attributed to Campagnola and Lotto, the drawing's stylistic similarities to other known works by the artist, and the compositional parallels to the National Gallery painting make it a significant addition to Sodoma's oeuvre. The painted version of Saint Jerome is dated to around 1535, suggesting an approximate date for the present drawing.
The drawing was formerly part of the so-called Antonio Badile Album of drawings, dispersed by the London dealer Francis Matthiesen in the 1950s. The album is of significance as it is one of the very few examples of a collection of drawings put together from many sources (in this case mostly North Italian artists) before Giorgio Vasari's famous collection was built from the 1540s. The contents of the album have recently been reconstructed and discussed by Dr. Evelyn Karet and Dr. Peter Windows (loc. cit.).