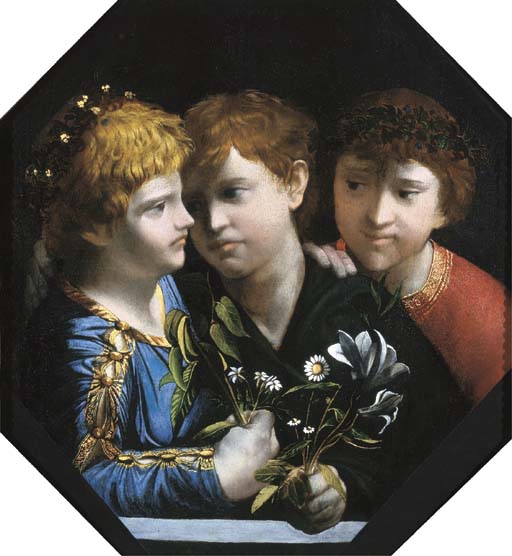 This important discovery belongs to a set of nine panels that Dosso Dossi painted in the 1520s to decorate the bedroom ceiling of Alfonso I D'Este, Duke of Ferrara, in the Este Castle. Five of the other panels are now in the Galleria Estense in Modena, one is in the Cini collection, Venice: one is in the Castle Museum in Eger (Hungary): and the ninth is still missing.

The present panel corresponds closely to the others in the set (which were reassembled for the Dosso Dossi exhibition of 1998-9) in style, composition, subject and dimensions. As with the others, its shape has been altered, and originally all nine consisted of ovals.

Duke Alfonso's bedroom was situated in the Via Coperta, a suite of apartments in a wing constructed by his father, Duke Ercole I, to link the Este Castle with the Palazzo di Corte, at the very centre of Ferrara. Alfonso was a military man, who spent most of his reign (1505-34) in the active defence of his state: but he also devoted particular attention to the decoration of his private apartments in the Via Coperta. The ovals painted by his court painter, Dosso, for his bedroom ceiling were set in a framework of richly carved and gilded wood: and for the ceiling of a neighboring room, the Camera del Poggiolo. Dosso similarly painted a large wooden tondo, again with half-length figures of conversing men and women, fragments of which survive in the National Gallery, London and at the Longhi Foundation, Florence. For another room, the Studio dei Marmi, Alfonso commissioned a series of reliefs all'antica, now mainly in the Hermitage, St. Petersburg, from the Venetian sculptor Antonio Lombardo. The most celebrated room in the suite, the so-called Camerino, comprised one of the most distinguished pictorial ensembles in all of Italian Renaissance art. Arranged around its walls were five large-scale paintings with bacchanalian subjects: Giovanni Bellini's Feast of the Gods (Washington DC, National Gallery of Art); Titian's Worship of Venus and Bacchanal of the Andrians (Prado, Madrid); Titian's Bacchus and Ariadne (National Gallery, London); and a Bacchanal by Dosso, now lost. Above these Dosso painted a frieze of ten smaller canvases depicting Scenes from the Aeneid; of the surviving five of these, two have been rediscovered only very recently (see Keith Christiansen, 'Dosso Dossi's Aeneas frieze from Alfonso D'Este's camerino', in Apollo, vol. 151, 2000, pp. 36-45).

These magnificent decorations were removed from their original settings when the state of Ferrara devolved to the papacy in 1598, and the Este dynasty transferred its capital to Modena. The large Bacchanals were acquired immediately, and sent to Rome by the papal nephew, Cardinal Pietro Aldobrandini; but it was to be another ten years before another powerful and acquisitive cardinal-nephew, Scipione Borghese, sent for the remaining paintings by Dosso. The legal right to the two sets of ceiling paintings was owned, however, not by the papacy, but by the new Duke of Modena; and after considerable diplomatic wrangling, Cardinal Borghese agreed to return five of the bedroom ovals to Modena (where they were subsequently transformed into rhomboids). But he retained for his own collection, in addition to the Aeneas frieze, the large tondo from the Camera del Poggiolo, and the remaining four ovals, including the present An allegory with three boys.

By the time of the Cardinal's death in 1633, the four ceiling panels had been converted from their original oval shapes to the octagonal fields still shared by the present picture and that in Eger, which also retains very similar dimensions (28 1/8 x 26 3/8 inches).

A recently discovered inventory of the Cardinal's pictures in the Villa Borghese includes a fairly accurate description of the present picture, together with the one still lost, as follows:

Although written in the grammatically abbreviated style characteristic of inventories, this entry may be roughly translated as follows:

'Two pictures on panel, each showing three figures in half-length. In one picture, two of the figures wear garlands, while one of them puts his fingers to his lips. The other picture also shows figures wearing garlands, while one holds a garland in his hand. The frames are polygonal, and gilded, and each picture measures 4 palms by 3 1/3. By Dosso.'

Despite the somewhat inaccurate reference to the foreground bouquet as a garland, the description of the second picture clearly corresponds to An allegory with three boys. The stated dimensions are slightly larger (one Roman palm was equivalent to 8 3/4 inches or 22.3 cm.), but they would not have been intended to be absolutely precise.

The pair is then mentioned in rather vaguer terms in the guides to the Villa Borghese by Manili (1650) ('I due quadri a Quattro facce, con tre mezze figure per uno, sono de' Dossi') and Montelatici (1700). Soon after 1700, the Borghese family sold the four pictures by Dosso from Duke Alfonso's bedroom. Two of them (now in Venice and Eger) are recorded in 1726 in the collection of Marchese Matteo Sacchetti, and later in the Capitoline Museum in Rome. The other two, however, including the second picture, disappeared around this time and have remained unlocated ever since.

In composition An allegory with three boys conforms to the format of the five Modena panels in showing three figures in half length, behind a foreground ledge and set against a neutral background. The Venice and Eger panels depart slightly from this formula in showing respectively four and two figures. Also in several of the other panels, the heads have a portrait-like realism. In these respects, the panels are clearly inspired by the example of Giorgione, in works such as the so-called Three Ages of Man in Palazzo Pitti, or the Giovanni Borgherini and his Tutor (National Gallery of Art, Washington). Decidedly Giorgionesque too, is the fact that the boys' garments have the character of fancy dress rather than of real contemporary costume.
This, together with the prominently displayed bouquets, confirms that the subject is meant to be more than mere genre, and carries some kind of allegorical significance.

As in the case of the other panels in the set, the precise meaning remains elusive. But several of the panels include references to virtues and vices and it is possible that this panel represents the virtue of Friendship as opposed to the more lustful Violence of the Eger panel. Yet contrary to what has sometimes been supposed, it is improbable that the set was based on any strongly intellectual or moralising programme, devised by some court humanist.

The unifying concept is likely rather to have been loose and flexible, with the purpose of giving delight rather than instruction, and it may even have been the product of informal conversations between Dosso and the Duke himself.

Somewhat surprisingly for the modest-scaled enterprise, the panels for Duke Alfonso's bedroom appear from their varying styles not to have been painted all at once, but at intervals throughout the 1520s. An allegory with three boys is closest in style and composition to the two Modena panels known as Conversation and Drunkenness, which are most convincingly dated to circa 1521-2, not long after Dosso's Madonna and Child in Glory with Saints John the Baptist, Sebastian and Jerome of 1518-21 for Modena Cathedral (in situ). At the same time, the highly refined treatment of the still life in the central foreground is very close to that of similar displays of flowers in the two surviving fragments of the tondo from the Camera del Poggiolo, which is documented to the years 1524-6. Other touches of extraordinary refinement in the An allegory with three boys, such as the gold embroidery on the neckline of the red robe, and down the arm of the blue robe, are made all the more telling for being offset by passages that are handled more summarily. By contrast, the panels dateable towards the end of the decade, such as the Music in Modena, or the Violence in Eger are executed more broadly and coarsely throughout.

We are grateful to Professor Peter Humfrey for the above entry.