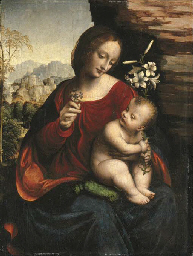 The Madonna and Child in a rocky landscape oil on panel 25 5/8 x 19 1/8 in. (65.2 x 48.6 cm.) with inscription '...originale di pietro perugino/1540...' (on the reverse) PROVENANCE Purchased by the grandfather of the present owners in circa 1920. NOTES This unpublished picture is, as Everett Fahy confirms after inspection in the original, an autograph example of a successful composition by Giampietrino. A good version, possibly that now in the Villa Albani, Rome, was engraved by C.C. Patin in her Pitture scelte e dichiarate, Cologne, 1691, p. 33. A very damaged variant, with notable differences in the landscape, but which was evidently of inferior quality, is in the Courtauld Institute, Gambier-Parry Collection. This panel is of French provenance and it may be significant that a copy is at Auxerre (no. 835.1.19, J.P. Sainte-Marie, Mus‚e des Beaux-Arts d'Auxerre, les Vingt Tableaux de la Collection Bernard, Auxerre, 1967, no. 19), and another example was in the collection of Ernest Raguit, Chƒtellerault; another, also apparently not of autograph calibre, was in the Benedict sale, Parke-Bernet, New York, 14 March 1951, lot 76. A picture at Modena, Galleria Estense, no. 228, was listed by Berenson in 1907 as by Marco d'Oggiono, but is regarded by D. Sedini ( Marco d'Oggiono, Milan, 1989, no. 120, illustrated) as being closer to Cesare da Sesto and Luini; Berenson gave a further version in the Herv‚-Math‚ collection at Le Mans to Marco and implied a close correspondence with the Gambier-Parry composition. The design of the figures is clearly an amalgam of motifs evolved by Leonardo, who of course was the dominant influence on the painter. W. Suida ( Leonardo und sein Kreis, Munich, 1928) pointed to a general connection with a Leonardo drawing of the Madonna and Child with a Cat (British Museum, no. 1860-6-16-100) in which the position of the Madonna's head is almost identical. The head of the Child is based on Leonardo's Madonna and Child with Saint Anne in the Louvre, or a related design. The foreshortening of the Virgin's right hand is also distinctly Leonardesque, recalling in its spatial function the design of the Madonna's hand in the Madonna of the Yarnwinder. While the Gambier-Parry and Modena pictures, and no doubt other versions, agree in showing, in the landscape, a group of thatched buildings, with on the bank above the spire of a church, clearly of transalpine character, in the present panel there is a castle above cliffs, with high alpine ranges beyond. This is very close to the work of Bernardino Marchiselli, il Bernazzano, the gifted landscape specialist who died in 1522 and collaborated with, among others, Cesare da Sesto - to whose bottega M. Carminati ( Cesare da Sesto 1477-1523, Milan, 1994, p. 6) considers Giampietrino to have had easy access.