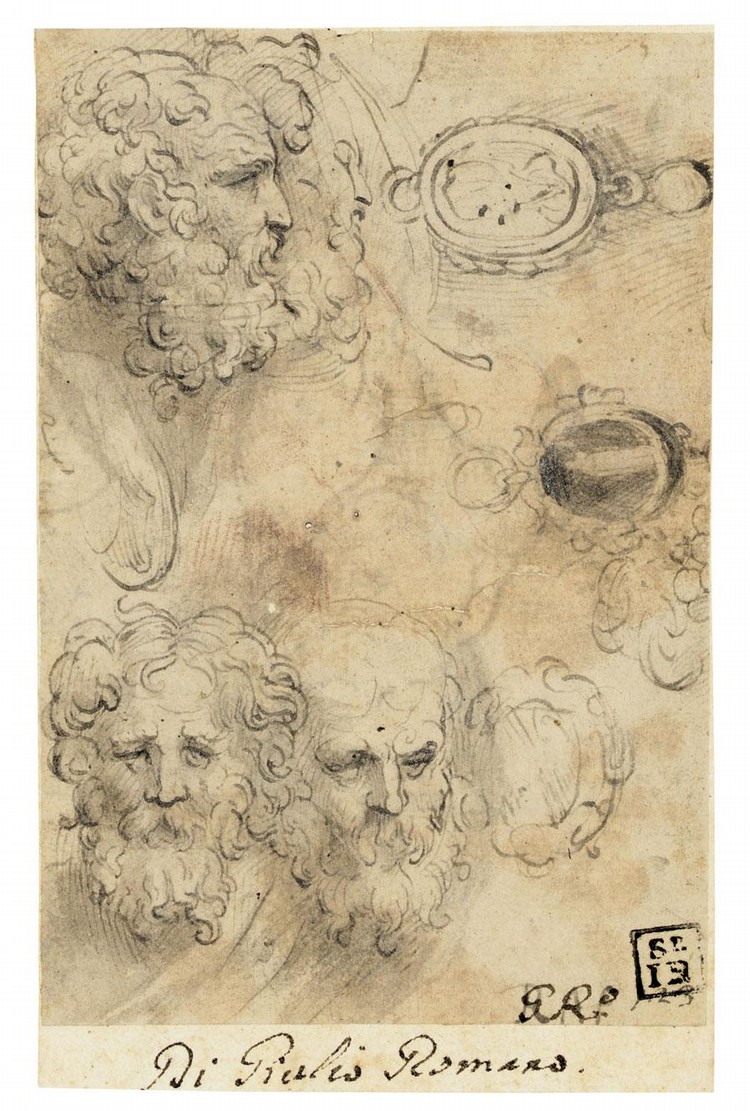 A SHEET OF STUDIES WITH FOUR HEADS OF BEARDED MEN, ONE IN PROFILE, AND THREE STUDIES OF PENDANT JEWELS, ONE WITH A STANDING FIGURE AND ANOTHER WITH AN OVAL PORTRAIT

David Ekserdjian dates this sheet in Parmigianino's Roman period, around 1524-1527. He will include it in his forthcoming monograph on the artist, to be published in 2006, and has pointed out the close stylistic similarities between the present head studies and those on the verso of a sheet dating from the same period, in the British Museum (see A. E. Popham, Drawings of Parmigianino, New Haven and London 1971, vol. I, cat. no. 189, reproduced vol. II, pl. 147).

The present graceful study was first published in 1970, when it was chosen as the cover illustration for the catalogue of the Rijksmuseum exhibition of Italian drawings from the Van Regteren Altena Collection. Although that catalogue entry noted that Popham had reservations about the attribution, the graphic style of the drawing had convinced the author to leave it as autograph and, indeed, to choose it for the front cover illustration. David Ekserdjian is of the same mind regarding the attribution, and has kindly provided the text from his forthcoming monograph, in which he discusses the present drawing in connection with others for decorative and ornamental objects. He writes: 'In any event, these highly unusual additions to the artist's exceptionally large corpus of drawings should serve as a double reminder: not only of the fact that his work is full of surprises, but also of the affectionate frequency with which jewels appear in his paintings once one starts look for them'. He also points out that it has been recently established that one of Parmigianino' s uncles by marriage, Andrea Guidorossi, was a jeweller, and that he was based in Rome, where he was joined by his son Pietro shortly before June 1524.