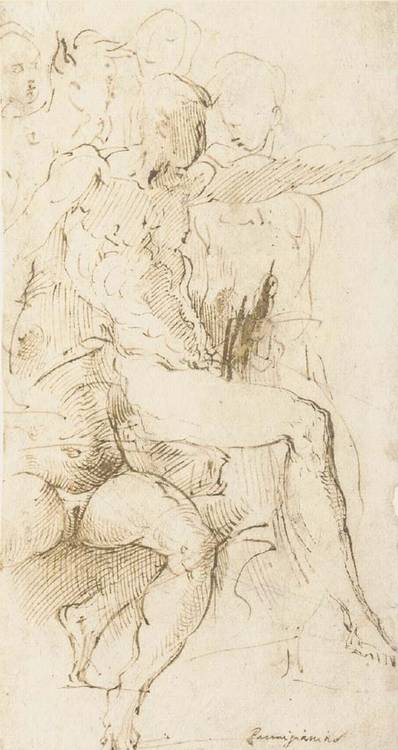 A seated male nude in profile to the right and a seated female nude seen from the front, four other figures beyond
with inscription 'Parmigianino F'
pen and brown ink
7 1/4 x 3 7/8in. (185 x 98 mm.)

One of small group of drawings of erotic scenes generally dated to the last decade of Parmigianino's life. Another drawing from the group, Two lovers on a couch, was sold at Christie's, London, 8 July 2003, lot 20, while two others, of Priapus and Lotis and Vulcan showing Venus and Mars caught in a net to the other gods, are in the British Museum (A.E. Popham, Catalogue of the Drawings of Parmigianino, New Haven and London, 1971, no. 257, pl. 366 and no. 254, pl. 370).
As with the present drawing, the most explicit sections of the drawings in the British Museum have been defaced by a later owner. Indeed in the case of the second drawing the full composition showing Venus and Mars in bed is only known through a copy at Chatsworth (M. Jaffé, The Devonshire Collection of Italian Drawings: Bolognese and Emilian Schools, London, 1994, no. 714).
Although this group of drawings date from the 1530s, the inspiration for this group of drawings seems to stem from Parmigianino's years in Rome before the Sack in 1527. The drawing sold at Christie's London in 2003 was inspired by Posture 10 of Giulio Romano's Modi, a series of explicit scenes drawn to be engraved by Marcantonio Raimondi in 1524. The twenty plates were described by Vasari as 'showing all the various ways, attitudes, and positions in which licentious men have intercourse with women', and were published together with accompanying scandalous sonnets by Pietro Aretino (R. Aste, 'Giulio Romano as designer of erotica', in Giulio Romano, Master Designer, exhib. cat., New York, Hunter College, 1999, p. 44). The images aroused the extreme displeasure of Pope Clement VII who ordered that the prints and drawings be destroyed. The compositions are now only known through a single engraving in the British Museum, contemporary copies including a bootleg edition published in Venice, and a mutilated set in the British Museum showing fragments with heads and feet (R. Aste, loc. cit.). Although the present drawing does not relate directly to any of the Modi, the posture of the male nude is similar to a figure in Posture 4 of the Modi (R. Aste, op. cit., fig. 25).