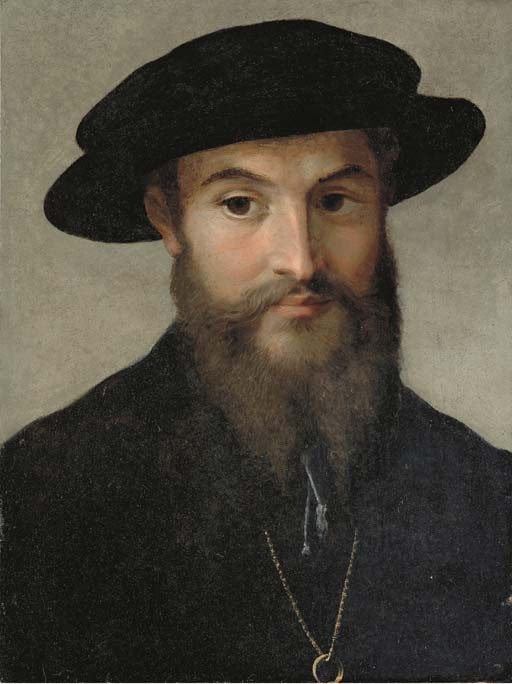 Throughout his career, Parmigianino painted portraits. In fact, he was one of the most prolific and imaginative portraitists active in Italy during the first half of the sixteenth century. Other aspects of his art - notably fresco painting and print-making - were confined, no doubt in part because of circumstances beyond the artist's control, to specific periods of his career, but the opposite is true of portraiture. There was no such thing as a specialist portrait painter à la Reynolds or Gainsborough in the early cinquecento, but it is tempting to suppose that Parmigianino's exceptional gifts within the genre were recognised in his own time. It is certainly striking that Vasari, in his Life of the artist, should have singled out a number of portraits for particular mention.

This small Portrait of a Man, which measures a mere 24.5 x 18.4 cm., is exceptional within Parmigianino's oeuvre for being on copper. There is a widespread tendency to presume that the use of copper as a support for painting was a northern European innovation, which only subsequently gained currency in Italy, in reality what little evidence there is points to Italy as the birthplace of copper around the fourth and fifth decades of the sixteenth century. Vasari (whose own Forge of Vulcan in the Uffizi is on copper) records Sebastiano del Piombo, who died in 1547 and was a great experimenter with new surfaces upon which to paint, as having employed copper - as well as marble and slate. No surviving works by Sebastiano are painted on copper, but Vasari is unlikely to have invented this particular detail. Correggio's lost Mary Magdalen, which was one of the jewels of the Dresden Gemäldegalerie, but has not been seen since the Second World War, was on copper, and must have been painted by 1534, the year of his death. By contrast, there is no evidence of northern artists using copper as a support until later on in the sixteenth century.

In the case of Parmigianino, the proof of his having painted on copper is contained within a document known as the Baiardo Inventory, which has a good claim to be the most informative inventory of works of art of the entire sixteenth century. It consists of a meticulously detailed listing of the paintings, drawings, prints, sculptures, coins and medals that belonged to the Cavaliere Francesco Baiardo (1486-1561), which gives every indication of being utterly reliable concerning matters of authorship. Baiardo was a Parmesan nobleman who was a close friend of Parmigianino's, and stood surety for his bail when he was imprisoned in 1539 as a result of his failure to complete a fresco cycle for the church of Santa Maria della Steccata in Parma. Parmigianino jumped bail, fleeing to Casalmaggiore, where he died the next year, and it is generally agreed that Baiardo must have acquired his studio property as compensation for his financial loss over the unrecovered bail money, which would explain the fact that there were over five hundred drawings by the artist in his collection. He also owned his painting of Cupid, now in the Kunsthistorisches Museum, Vienna (which was recorded by Vasari in 1568 in the possession of his grandson - and heir - Marc'Antonio Cavalca), as well as numerous other paintings by him, including a Pallas Athene (Royal Collection, Hampton Court) and a Saturn and Philyra (Stanley Moss, Riverdale-on-Hudson), and various portraits. One of these, no. 41 in the Inventory, is described as 'Un Ritratto sopra il rame colorito finito' ('A coloured portait on copper, finished'), and its dimensions are given as 6 x 4 Parmesan inches (see fig. 1). The Parmesan inch measured approximately 4.5 cm., so the dimensions were around 27 x 18 cm. The gender of the sitter is not specified, but this cannot be taken as meaning that it was a portait of a man. On the other hand, the dimensions are remarkably close to those of the present portrait, not least given that all measurements in the Baiardo Inventory are given to the nearest Parmesan inch; if they are not one and the same portrait, then it follows that Parmigianino must have painted at least two portraits on copper. Baiardo died in 1561, and there has been a tendency to assume that the Inventory was compiled at that point, but a substantial body of evidence - comprising three separate unpublished wills, and a donatio inter vivos in favour of his grandson Marc'Antonio Cavalca - suggests that he was peculiarly obsessed with the fate of his estate, and encourages the speculation that the inventory may have been drawn up under his aegis, which would also explain its unparalled accuracy.

The idea that Parmigianino should have explored the potential of copper as a support for painting is the very opposite of far-fetched, not only because he collaborated so extensively with print-makers, but above all because he himself used copper plates for etching - indeed, he was the first Italian to produce etchings on a more than occasional basis. The facial type beneath the black-brimmed hat, the engagement of the gaze, the handling of the pinkish flesh tones, and the muted colour-scheme with a pale grey ground beyond the meticulously observed subject all accord well with Parmigianino's Portrait of a Man in the Kunsthistorisches Museum in Vienna, a portrait which is generally agreed to date from the artist's Bolognese period, which lasted from 1527 to 1530 or 1531. The identity of the sitter remains entirely mysterious, and was unknown to the compiler of the Baiardo Inventory, if this is the work listed there. What is clear, however, is that the gold ring hanging from a gold chain round the sitter's neck was almost certainly a treasured keepsake that he held very dear. If it had originally belonged to a lady, then it would very possibly have been too small to fit even on the man's little finger. Be that as it may, this haunting portrait, which gives every indication of having been painted by Parmigianino around 1530, is an extraordinary addition to his oeuvre, and has an excellent claim to be the earliest surviving old master painting on copper.

The present picture will be included in David Ekserdjian's forthcoming catalogue raisonné on the artist due to be published in September 2006. We are also grateful to Dr. Mario di Giampaolo, Dr. Elisabetta Fadda, Dr. Lucia Fornari Schianchi and Dr. Sylvie Béguin, all of whom have inspected the present picture in the original and have confirmed the attribution.