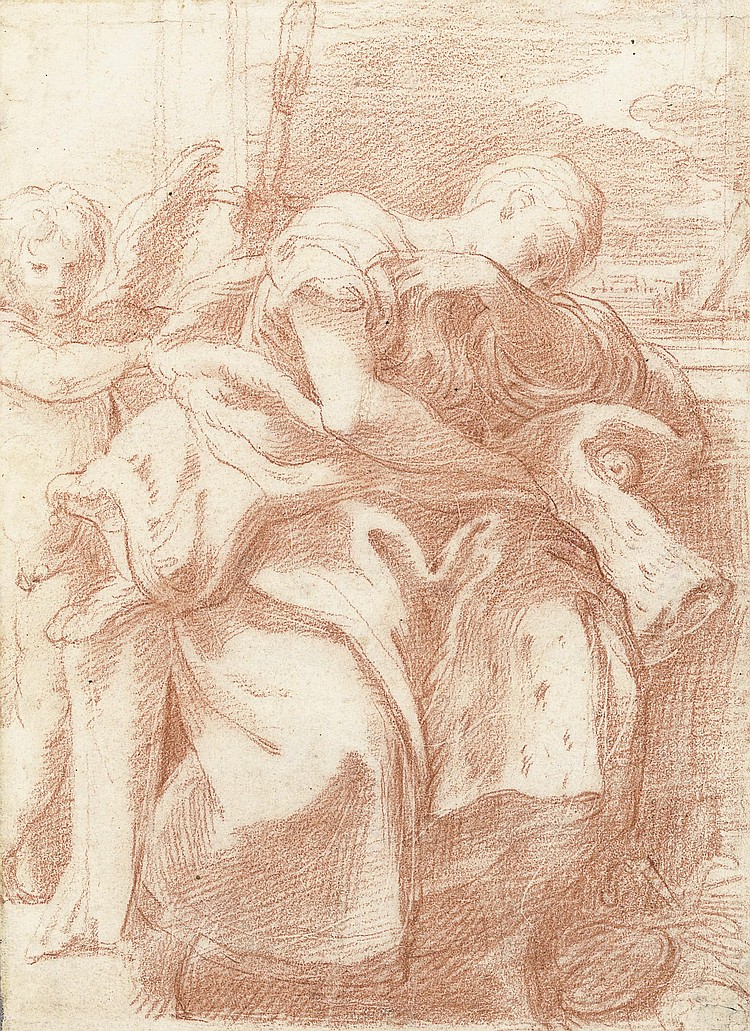 Girolamo Francesco Maria Mazzola, Il Parmigianino (Parma 1503-1540 Casalmaggiore)
A sleeping female figure, a winged putto beside her with a sword resting behind them
with inscriptions 'D. Franc. Parmnsis.', '12' (verso) and 'Parmg.' (on the outer backing), 'Parmigiano' and 'P' (on the inner backing).
red chalk, over stylus indications
8¼ x 6 in. (206 x 153 mm.)

The subject of this recently rediscovered drawing is elusive and it has several unresolved iconographical antecedents. The sleeping female figure is based loosely on a drawing by Raphael in the Uffizi (inv. 1973 F; P. Joannides, The Drawings of Raphael: with a complete catalogue, Berkeley, 1983, p. 219, no. 342 r). More than he Raphael drawing, and the engraving after it by Marcantonio Raimondi (B. 460), the present drawing is closest to a print attributed to a follower of Marcantonio Raimondi (fig. 1). Both engravings have been identified as showing the Vision of Saint Helena.
As the mother of the Emperor Constantine, Helena went to Jerusalem in search of the True Cross which appeared to her in a vision. The present drawing has many of the iconographic elements of the narrative, including the sleeping woman draped in a regal ermine cloak in front of an open window. However, there is no cross in the Parmigianino drawing, rather the device behind her and next to the angel appears to be a sword.
Alternatively, Gnann suggested that the sleeping female figure could be the personification of Fortitude or Justice although the iconography of both virtues does not precisely match either. The sword resting behind the woman is an emblem of both virtues, but she lacks the scales or blindfold commonly associated with Justice, nor is she wearing the helmet and armour typical of Fortitude. The inclusion of the putto and sword in this and another drawing in black chalk by Parmigianino that is a variant of this composition (Geneva, Krugier-Poniatowski Collection; Gnann, pp. 288, 376, no. 247; see also The Timeless Eye. Master Drawings from the Jan and Marie-Anne Krugier-Poniatowski Collection, exhib. cat. Venice, Peggy Guggenheim Collection, 1999, no. 27) indicates that Parmigianino was wrestling with a specific narrative. The tenderly observed sleeping woman in both drawings suggest a live model was the basis for the figure and not the Raphael drawing (where the pose slightly differs) or the Raimondi print, although they both seemed to serve as the inspiration for the subject. The recto of the drawing in the Krugier collection is a study for the figure of Joseph of Arimathia in an etching The Entombment (B. 5) which is generally dated to Parmigianino's stay in Rome, 1524-27. The present drawing can be dated to that period as well.
This drawing was formerly in the collection of Alfonso III d'Este (1591-1644), Duke of Modena and Reggio who presided over the twilight of the Este dynasty. The Estes reached their apogee as a political force and art collectors in Ferrara at the end of the 15th and beginning of the 16th centuries. Their drawings collection was both vast and of the highest quality, and embodied a rare eclecticism. Although now for the most part dispersed, much of the collection has been reconstructed through old inventories and correspondence (see J. Bentini, Disegni della Galleria estense di Modena, Modena, 1989).