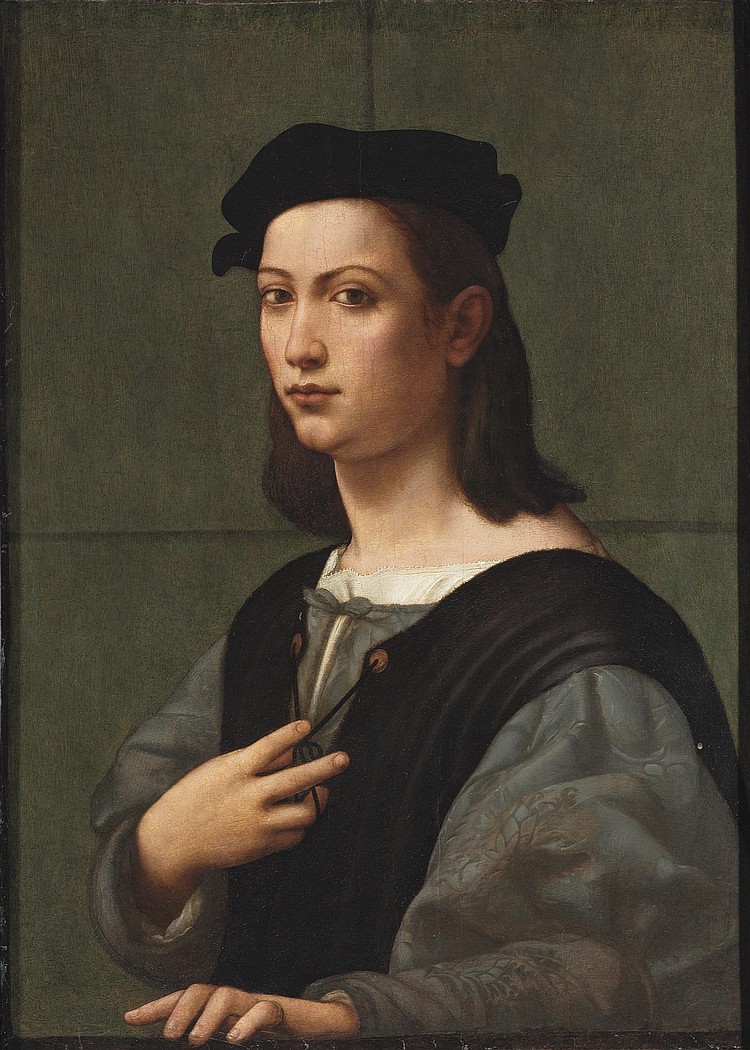 (Probably) Philip Dormer Stanhope, 4th Earl of Chesterfield, P.C., K.G. (1694-1773), and by descent at Chesterfield House, London, where recorded in 1815 as 'His own Portrait by Raphael' (loc. cit).
(Possibly) Harold Peto (1854-1933), architect and garden designer, London.
Private collection, Switzerland, by which transferred to
A UK charitable trust.

Sold to Benefit a Charitable Trust
VAT rate of 5% is payable on hammer price and at 15% on the buyer's premium
Long thought to be a self-portrait by Raphael, this picture was first published as Bugiardini in 1987 by Laura Pagnotta, who dated it to the period 1525-30. This did not discourage Cecil Gould, then retired from his post as Keeper and Deputy Director of the National Gallery, to revive the traditional attribution to Raphael in 1991. Gould correctly pointed out that the style of the dress and hair in the present picture would date it to c. 1504-8, and presented a convincing argument that it may well have been the putative self-portrait recorded in an 1815 inventory of the celebrated collection at Chesterfield House, as 'His own Portrait by Raphael' (loc. cit.). Gould illustrates a Chesterfield seal which had been removed from the reverse of the present lot, identical to the seal on the reverse of the Portrait of a young man in red (Los Angeles, J. Paul Getty Museum), called Raphael in the Chesterfield collection and now given to the master's circle. Gould thought that the present picture may have passed, like the Getty picture, through the collection of the architect Harold Peto, where the latter work had been photographed in 1891. Pointing out 'a degree of unforced monumentality which exceeds that in any picture by Bugiardini', Gould related the pose in the present picture to that in the Portrait of a youth in Budapest (Szépmüvészeti Múzeum) and the celebrated Portrait of Bindo Altoviti (Washington, D.C., National Gallery of Art), while also pointing out that the device of the creases in the cloth that forms a backdrop to the sitter recurs in Raphael's Julius II (London, National Gallery). In the tradition surrounding the picture it was hypothesised, though not by Gould, that it might be the picture painted for an exchange of self-portraits between Raphael and Francesco Francia, an event mentioned in a letter written by Raphael and transmitted in Malvasia's Felsina Pittrice (Bologna, 1841, I, part II, p. 47).

The attribution to Bugiardini was reiterated by Pagnotta in 1992, and has since been supported by Professor Jürg Meyer zur Capellen and Mr. Everett Fahy, to whom we are grateful for their first-hand examination of the picture. Agreeing with Gould's dating of c. 1504-8, Professor Meyer zur Capellen considers that it is influenced by Raphael's Florentine portraits (letter of expertise, 9 June 2008). Bugiardini is best remembered as Michelangelo's co-pupil in the Medici Garden and Ghirlandaio's workshop, and his assistant in the frescoes of the Sistine Chapel. He worked in the quintessentially Florentine style of Fra Bartolommeo and Mariotto Albertinelli, with whom he was closely associated, and was also deeply affected by the influence of Raphael, especially in the latter's pre-Roman period.

The long-standing attribution of the present lot to Raphael has been partly due to its outstanding quality, which makes this one of Bugiardini's masterpieces. Sir John Pope-Hennessy, who examined the present lot in the conservation department of the Metropolitan Museum of Art, noted that he had never encountered another Bugiardini 'so evidently innovative [or with] so powerful a presence, and none in which the dress is painted with such boldness' (letter, 15 April 1982).