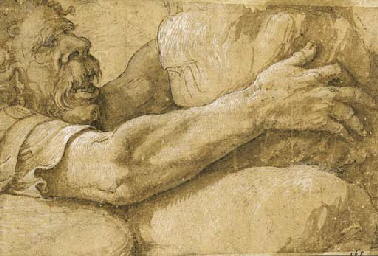 A giant clutching a rock black chalk, pen and brown ink heightened with white on light brown paper, squared in black chalk, extended at the upper and lower margins, minor losses 182 x 262 mm. PROVENANCE P. Crozat, his number '168'; Paris, 10 April-13 May 1741, part of lot 148 (51 livres to Nourry, as....Vingt, idem [Jules Pippi, plus connu sous le nom de Jules Romain.]; dont plusieurs ‚tudes pour la chambre des g‚ants au palais du T‚.). Conseiller Nourri; Paris, 24-7 February 1785, part of lots 287-303. NOTES A newly rediscovered study for the giant at the lower right of the fresco of the Giants buried under Pelion and Ossa, in the Sala dei Giganti at the Palazzo Te, Mantua, F. Hartt, Giulio Romano, New Haven, 1958, II, fig. 338. The frescoes were painted between March 1532 and July 1534 by Giulio Romano's assistant Rinaldo Mantovano based on the master's designs. A study for the giant just above and to the right of the present one, also formerly in the Crozat Collection, was in the Ellesmere Collection, sold at Sotheby's, 5 December 1972, lot 43. A further drawing, of Jupiter hurling a thunderbolt, for the centre of the ceiling fresco, was lot 42 in the same sale. Frederick Hartt dated the drawings to the second half of 1531. The Sala dei Giganti was described by Hartt as 'the most fantastic and frightening creation of the entire Italian Renaissance in any medium', F. Hartt, op. cit., p. 153. According to Vasari the room was actually built on marshy ground and required heavy foundations, walls and vaulting, which gave the room a claustrophobic atmosphere. The frescoes run continuously around the vaults and walls and the giants are seen all around the room, crushed by rocks, grabbing crumbling columns and screaming. The giant in the present drawing is immersed in boiling water and tries to clutch at a rock to pull himself up. Jupiter stands at the centre of the ceiling hurling his thunderbolts at the giants. He is surrounded by the gods of Olympus, who are terrified by the scene below them. The effect of the rooms was truly frightening. Vasari describes how 'he who enters that room, seeing the windows, the doors, and other such things twist and about to fall to ruin, and the mountains and the edifices about to collapse, cannot but fear that everything will fall in ruin on top of him', quoted by F. Hartt, op. cit., p. 155.