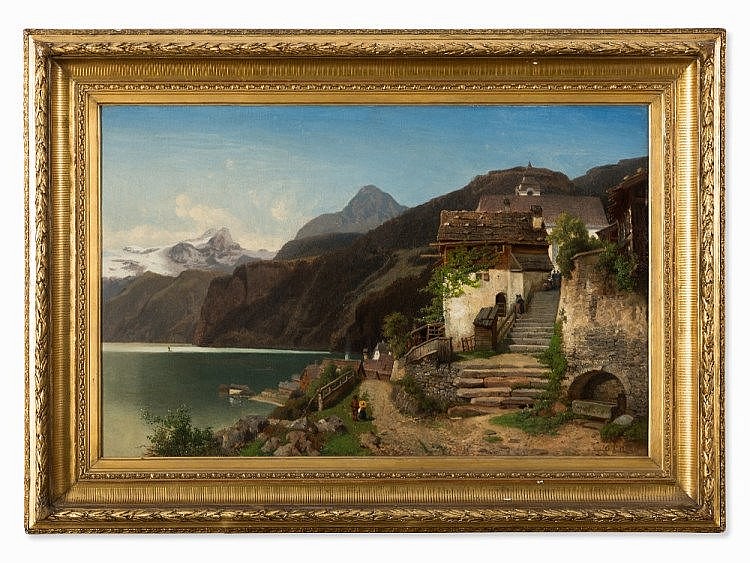 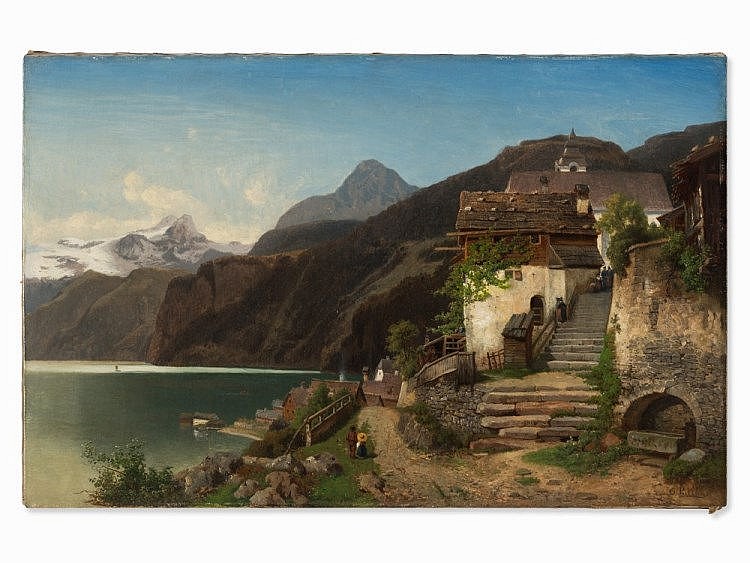 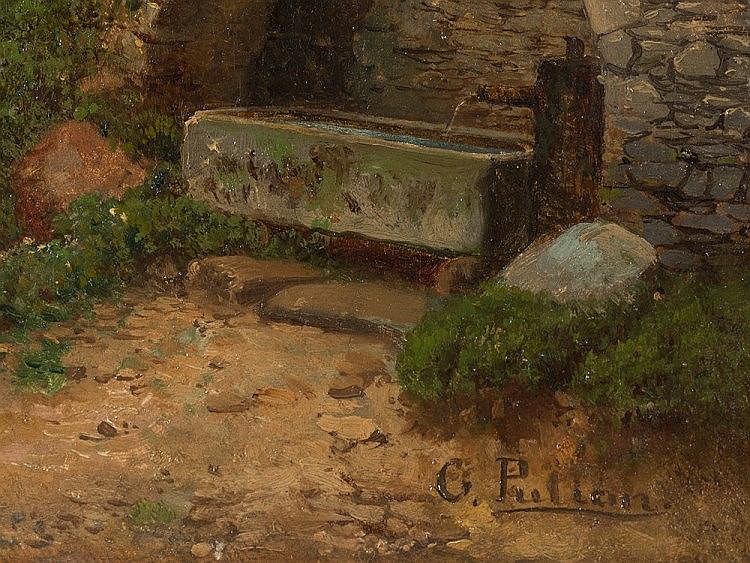 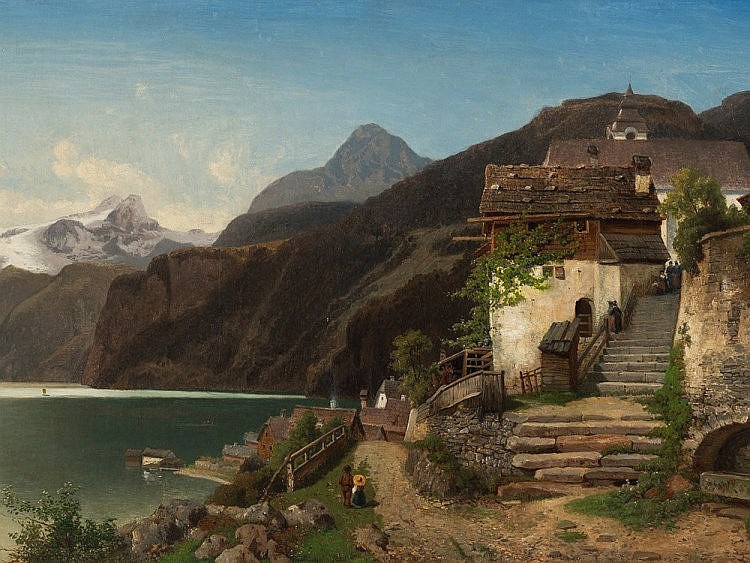 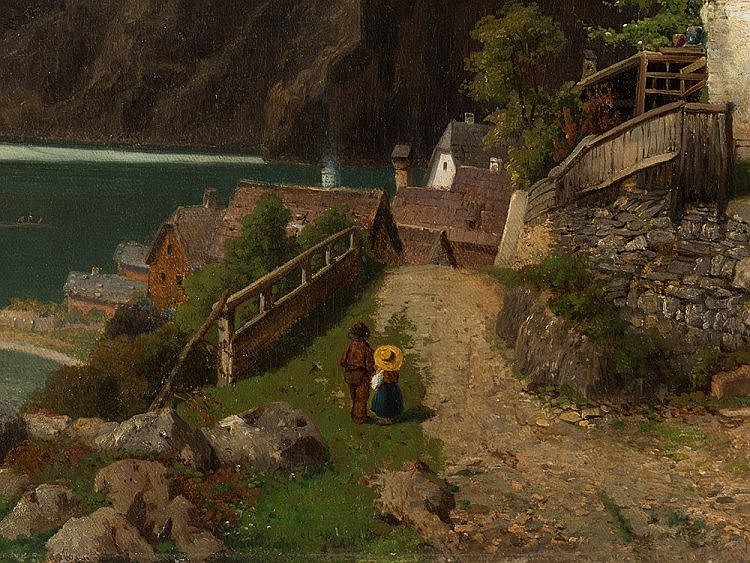 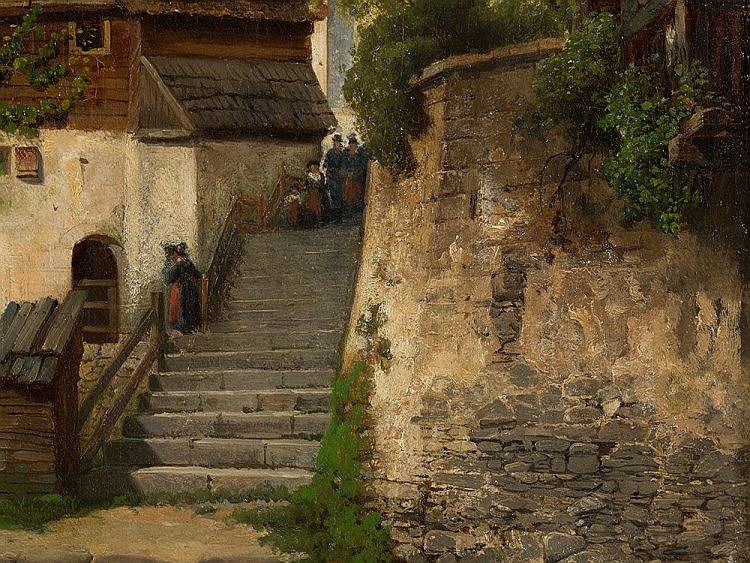 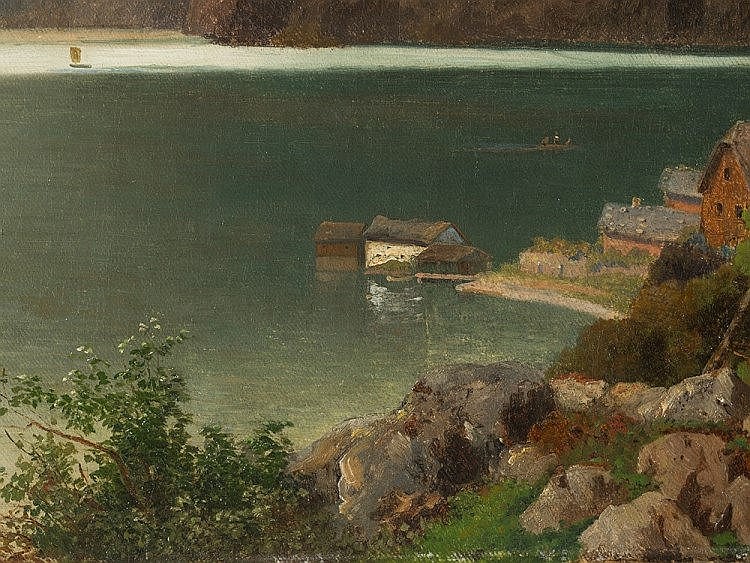 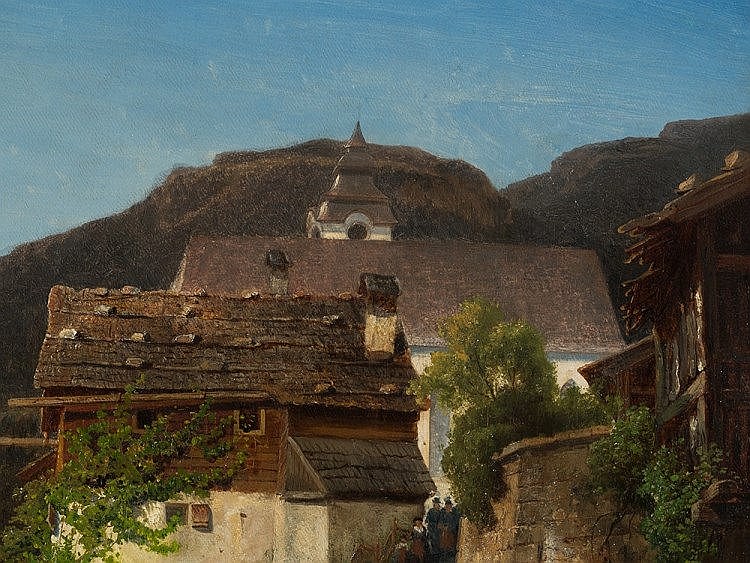 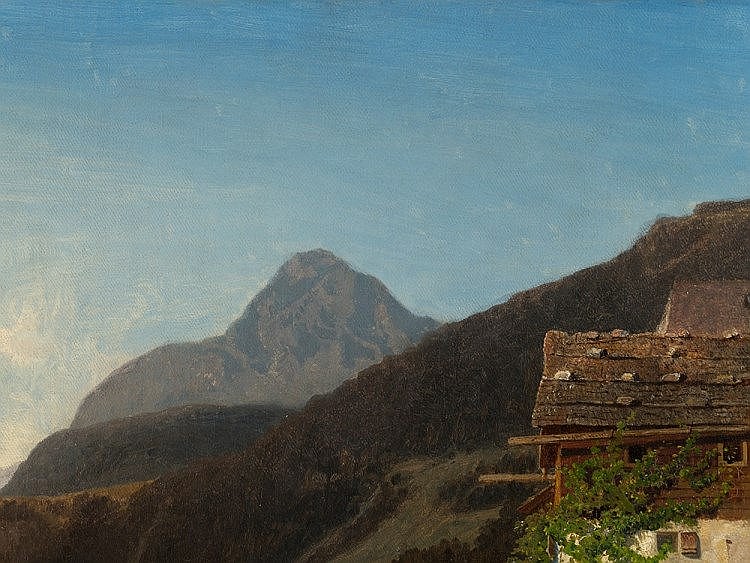 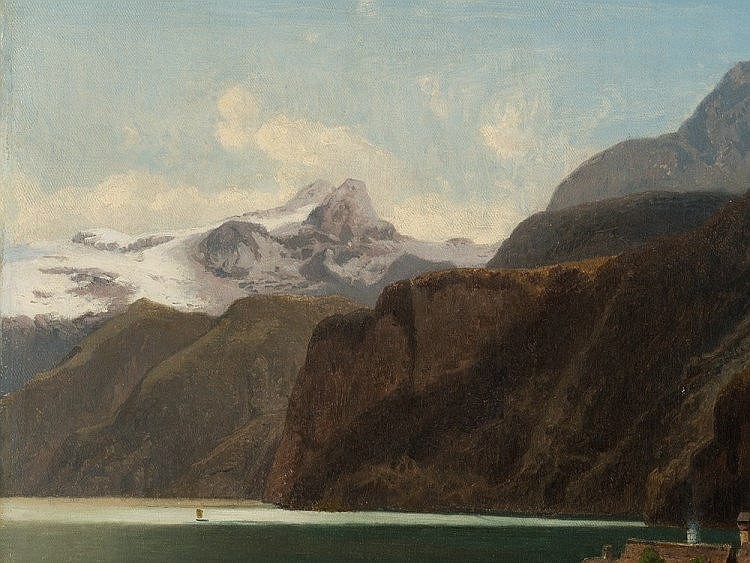 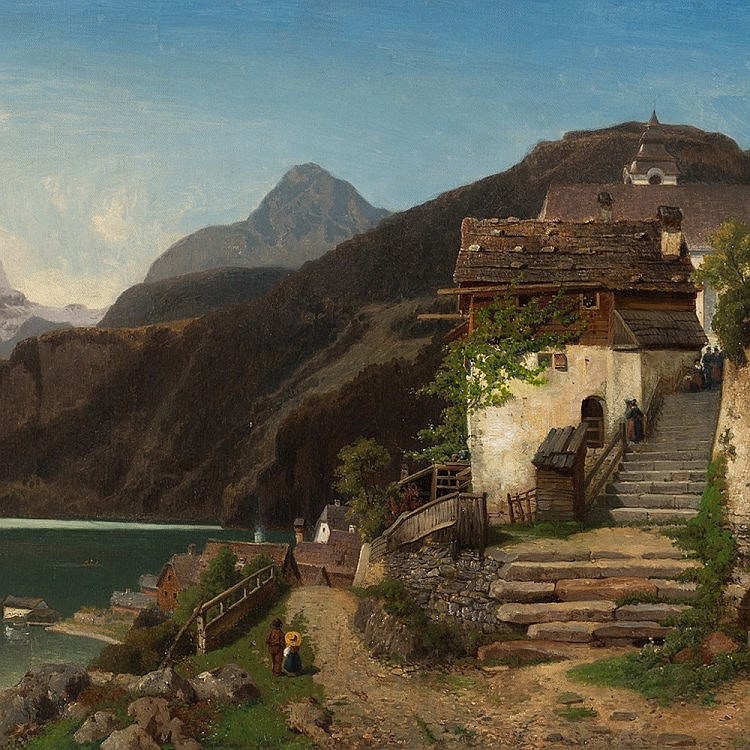 According to the article about Gottfried Pulian, published in Friedrich v. Boetticher’s book ‘Malerwerke des Neunzehnten Jahrhunderts’, there was a seascape of Lake Hallstatt by Pulian exhibited at the annual art exhibition of the Dresden Academy (later eventually bought by the art union ‘Sächsische Kunstverein’). It is possible that the offered painting turns out to be the above mentioned work, not least because of the typographic label ‘NDGKV.’ on the reverse, which could be interpreted as an inventory label of the ‘Sächsische Kunstverein’.

Condition:
The painting is in good condition, consistent with age. The paint surface shows light marks, where the frame has rubbed. Inspection under UV light reveals a few retouchings to the sky, the mountain panorama, as well as the foreground. The stretcher measures 61 x 95 cm. The stucco frame shows small traces of wear and measures 86 x 119.5 cm.

Gottfried Johann Pulian (1809-1875)
Born in Meissen, Johann Gottfried Pulian studied at the local ‘Staatliche Zeichenschule’ from 1826, where he attended the class of the German romanticist Ludwig Richter (1803-1884) in 1828/29. He continued his studies at the Art Academy in Dresden until 1832 and from 1838 to 1842 at the Art Academy in Düsseldorf, where he was a student of Johann Wilhelm Schirmer (1807-1863). A follower of the Düsseldorf School, Pulian was active in Düsseldorf ever since and became a founding member of the artist’s association ‘Malkasten’. Pulian’s central subjects were views of the Rhine and landscapes from Upper Bavaria, the Belgian Netherlands and the Province Salzburg (Austria). As it was common for representatives of the Düsseldorf School, Pulian often painted in ‘plein-air’, on the basis of which he later completed full-scale paintings in his studio. Works by Pulian are preserved, for instance, at the Museum Kunstpalast in Düsseldorf and the Nationalgalerie in Berlin. (cbo)

NO WARRANTY: Everything in this auction is being sold "AS IS - WHERE IS" to the highest bidder, without warranty or guarantee of any kind. ALL SALES ARE FINAL. EJ'S Auction & Consignment is not responsible for missing or broken items after the auctioneer sells that item. ABSOLUTELY NO REFUNDS.

CONDITION OF ITEMS SOLD: The auctioneer shall not be responsible for the correct description, authenticity of, or defect in any lot, and makes no warranty in connection therewith. No allowance will be made or sale set aside on account of any incorrectness, error in cataloging, or any imperfection not noted. No deduction will be allowed on damaged articles as all goods being exposed for public exhibition are sold as is and without recourse.

The purchase price stated in the auction catalogue ("Starting price") does not include the buyer`s premium inclusive VAT. This is also the case with the hammer price. Thus Auctionata charges the Buyer's Premium additionally.

The amount of the buyer`s premium is calculated as follows: