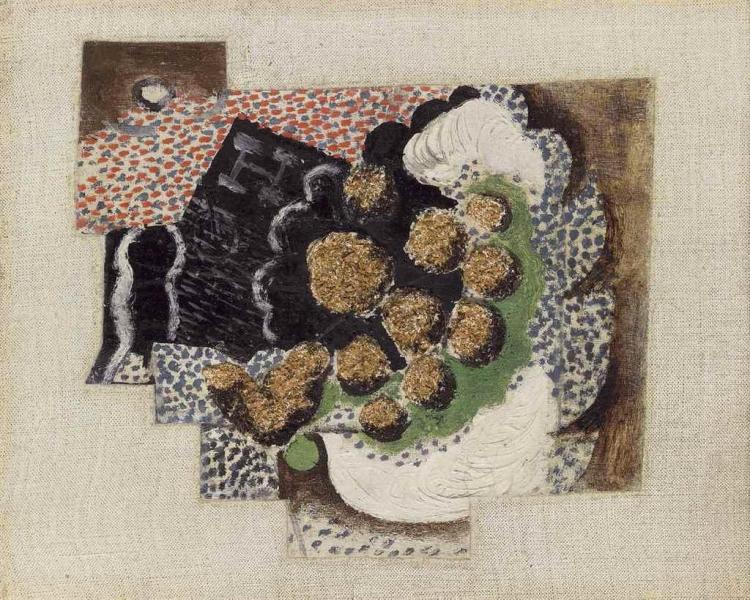 Executed in Paris, during the spring of 1914, Grappe de raisin combines a lively variety of textures, mimicking in oil the eclectic effects of the Cubist papiers collés, on which Picasso had been working relentlessly for the last few years. Painted over a finely woven canvas, irregularly cut and pasted onto a coarser support, the still life is indeed constructed like an assemblage: Picasso painted the dotted sections of the painting like stripes of paper onto which a black form is glued. Imitating his own collage method, he then added a few white lines and a stencilled letter on top as though to unite the separate, cut and pasted elements. While in his papiers collés he resorted to extraneous printed paper to construct his Cubist compositions, in Grappe de raisin the artist incorporated sawdust: granular and coarse, it gives a material texture to the grapes. Its incorporation into the oil painting fulfils a role similar to that achieved, in the papiers collés, by the inclusion of printed papers. Both extraneous elements served Picasso in highlighting, in a witty way, the inherent make-believe nature of art. In Grappe de raisin, the tactile, granular nature of the sawdust immediately points to the pictorial trickery of the dotted sections of the painting. At the same time, however, by being transformed into the smooth surface of grapes by virtue of artistic mimesis, the ‘authentic’ nature of sawdust – so apparent at first – is ultimately refuted: no longer ‘real’ sawdust, but a representational means, its claim to ‘realism’ capitulates to the persuasive force of art’s illusion.  In this regard, Grappe de raisin is a particularly interesting work in so far as it offers a particularly stimulating example of the inclusion of stippling, a pictorial technique Picasso had started to exploit in his paintings in 1913. The effect might have originated in Picasso’s reflection on Seurat, influenced by the enthusiasm of his friend Gino Severini. The artist’s biographer and friend John Richardson explained: ‘After spending evening after evening in the course of winter, 1913, listening to his new friend Severini extol the qualities of the artist he regarded as his master, Picasso had further designs on Seurat. It was not his divisionist theories and optical calculations that attracted him; it was the master’s dots he wanted to exploit, but in his own new way. And exploit them he did, in much the same spirit as a modiste applying sequins to a dress. Picasso’s juxtapositions of coloured dots do not generate light or, for that matter, shadow, as Seurat’s pointillism does. They embellish specific objects and areas and make them tactile; they also set up a vibration that animates surfaces, just as passages of faux bois and faux marbre do’ (J. Richardson, A Life of Picasso, vol. II, London, 2009, p. 291). Coupled with sawdust, Picasso’s coloured dots in Grappe de raisin do not only animate the composition, they also help to articulate that subtle reflection on representation that was at the core of Cubism’s revolution and Picasso’s papiers collés in particular.