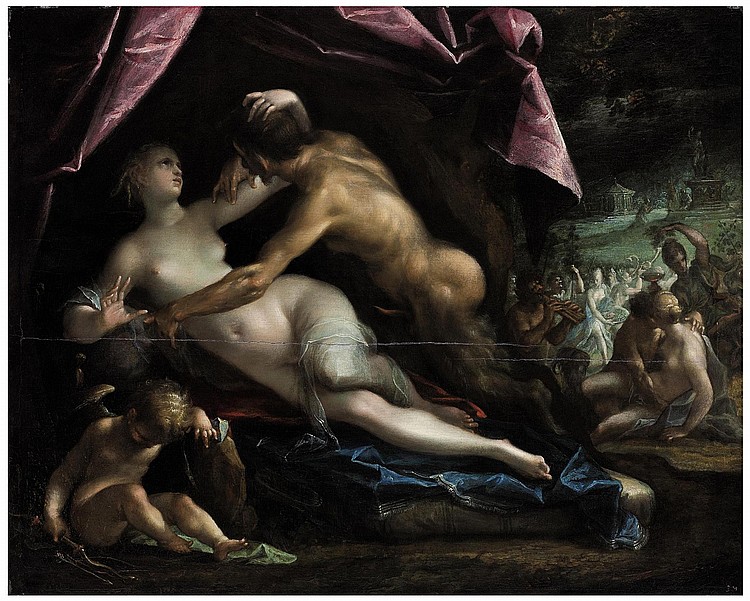 Painted around 1600-5 for the imperial collection of Rudolf II in Prague, Von Aachen's Pan and Selene has recently been acknowledged as one of the artist's most accomplished works along with a small group of paintings executed in the same period, that includes the Bacchus, Ceres and Cupid, Boy with grapes and the Tarquin and Lucretia (all Vienna, Kunsthistorisches Museum; see E. Fucíková, in the catalogue of the exhibition, Hans von Aachen. Court Artist in Europe, 2010, p. 28).

The last two digits of the date are undecipherable but both Fucíková and DaCosta Kauffman date the picture close to 1600 by virtue of its stylistic affinities with the Allegory of the Return of the Golden Age, from 1598 (Munich, Alte Pinakothek), and the Allegory of Peace, dated 1602 (St. Petersburg, Hermitage). The composition is closely related to a larger painting on canvas of Rape of Lucretia, (Vienna, Kunsthistorisches Museum), also datable to around 1600, showing Tarquin forcing himself on to a reclining Lucretia in much the same pose as that adopted by Pan and Selene. A related drawing is in the Staatsgalerie, Stuttgart.