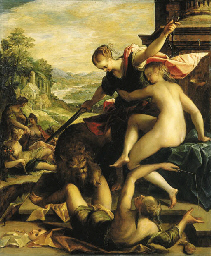 The Triumph of Truth and the Imperial Cause oil on copper 23 7/8 x 19 7/8 in. (60.6 x 50.5 cm.) PROVENANCE Colonel Leslie (label on reverse). NOTES This is an autograph version of the painting, signed and dated 1598, in the Alte Pinakothek, Munich. The composition was traditionally understood to represent The Triumph of Truth or The Triumph of Truth protected by Justice ; more recently, Thomas Dacosta Kaufmann ('Empire Triumphant', Studies in the History of Arts, 8, 1978) suggested that the Munich painting was in fact one of a pair, with an Allegory of the Triumph of Dominion over Time (Stuttgart, Staatsgalerie), illustrating the benefits of Imperial rule. As represented by Kaufmann in L'cole de Prague (Paris, 1985), in the composition, while the figures of Truth and Justice are easily recognisable, that of the lion should be interpreted as representing the Emperor, or the Imperial cause - as it was used in other Rudolfine works by artists such as Georg Hoefnagel, Adriaen de Vries and von Aachen himself, and as it was explained by Typotius ( Symbola Divina et Humana, Prague, 1601-3). The figure attacked by the Lion holds a purse and mask, representing deceit and corruption. In the background are depicted Agriculture, with the cornucopia and scythe, being united with Peace, with the olive branch, by Concord, together representing the benefits of good government. This interpretation of the picture is reinforced by a preparatory drawing in the Kunstgeschichtliches Seminar der Universit„t, G”ttingen. In that, Victory, in the form of a winged putto, is depicted in the sky crowning Truth and Justice, whilst in the background Hercules, frequently used to represent the Emperor or more generally the Habsburgs, triumphs over his enemies. In the foreground the Imperial Lion attacks a Ram which, used in the past to symbolize the Empire of the Medes (see G. Teravent, Attributs et symboles dans l'art profane, Geneva, 1958), could be meant to interpret another Eastern power, in particular the Turks, as used by von Aachen in his allegorical depiction of The Battle of Hermannstadt (Vienna, Kunsthistorisches Museum) of 1603-4. Given the propagandist message underlying the composition, it is understandable that a version may have been commissioned. The evident quality of the present work, as well as the fact that - like the original - it is painted on copper, suggest that, rather than being one of many versions for general dissemination, the request was a one-off. The fact that the Munich picture is thought to have been a gift from the Emperor to Maximilian I of Bavaria supports the hypothesis that the present work was intended for a similar purpose. SALESROOM NOTICE We are grateful to Dr. Eliska Fucikova for confirming the attribution on the basis of photographs; and notes some studio participation.