inscribed with date along the upper margin: 15.86 oil on canvas

Collection of Prince Corsini, Galleria Corsini, Florence, by 1880 and until at least 1912 (cited there in R.A. Peltzer, under Literature, 1911-12);
With Carlo Orsi, Milan;
Art market, Milan, where acquired by the present owner.

PROPERTY FROM THE LONDON RESIDENCE OF LUIGI KOELLIKER
According to an inscription on the reverse of the original canvas, the sitter in this portrait is Jacques Jansz. Bijlivelt (or Jacopo Bilivert), a highly esteemed Dutch goldsmith-jeweller who came to work at the Medici court in Florence in the last quarter of the 16th century. Bijlivelt was born in Delft on 17 November 1550 and arrived in Florence as a young man, on 24 September 1573. Three years later he married a florentine woman called Fiammetta,υ1 and together they had a son; the famous painter Giovanni Bilivert (1585-1644). It seems likely that Bijlivelt was summoned to Florence by Cosimo I de' Medici for shortly after his arrival in the city the goldsmith's account-book records a series of entries relating to his work on a Medici crown.υ2 This crown was commissioned by Cosimo I in 1577 to replace that with which Pope Pius V had crowned him Grand Duke of Tuscany in a ceremony held in Rome on 5 March 1570. It was an important commission for such a young man - and a foreigner at that - but Bijlivelt must have had quite a reputation for only six days after his arrival in Florence he received 35 gold scudi to make a pendant for the Grand Duke and was already installed in the palazzo. After Cosimo's death in 1574 Bijlivelt remained in the employ of the Medici, working both for Francesco I (1541-1587) and Ferdinando I (1549-1609). It was in the employ of the latter that the biographer Filippo Baldinucci described Bijlivelt, in his Vita of Giovanni Bilivert, as 'uomo assai civile; ed è probabile cosa, che'e' fusse anche intelligente delle buone arti'.υ3 It was during Hans von Aachen's sojourn in Florence that the painter probably met Jacques Bijlivelt. Von Aachen travelled to Italy in around 1574, visiting Venice and Rome as well as Florence. He is recorded in the latter during the first half of the 1580s (in 1585 he had again settled in Venice) and was employed by the Grand Duke Francesco I, of whom he painted a portrait now in the Appartamenti Reali, Palazzo Pitti, Florence.υ4 Baldinucci informs us that during his time at the Medici court Von Aachen painted numerous portraits and he is known to have painted fellow artists and craftsmen: see, for example, his portrait of the sculptor Giambologna (1529-1608), formerly in the collection of Filippo Baldinucci and today in the Musée de la Chartreuse, Douai.υ5 Von Aachen was in Florence in 1585 and probably painted this portrait of Bijlevelt then, though it is not impossible that it was painted a year later when both artists are recorded in Venice (though the date of 1586 on the recto and inscription on the verso both appear to be by later hands). The early Corsini provenance cited by Peltzer (see provenance and literature below), though unsubstantiated by documents, would also suggest a Florentine rather than Venetian provenance for the portrait and a date of execution around 1585. According to Jacoby the original canvas was inscribed on the reverse: Ritratto del Sig. Giaches Bilivert fia. Padre di Giovanni Bilivert pittore... dipinto per mano di Ans. Vanach Pittor Fiamingo l'anno 158.. 1. Some have identified her as Fiammetta di Francesco Frediani and others as a member of the Mazzafirri family.
2. See C.W. Fock, "The Medici Crown: Work of the Delft Goldsmith Jacques Bylivelt", in Oud Holland, vol. LXXXV, 1970, pp. 197-209.
3. F. Baldinucci, Notizie dei Professori del Disegno da Cimabue in qua, ed. Florence 1846, vol. IV, p. 301.
4. See J. Jacoby, under Literature, pp. 230-31, cat. no. 81, reproduced p. 6, fig. 1.
5. See Jacoby, op. cit., pp. 235-38, cat. no. 85, reproduced p. 20, fig. 11. Von Aachen also painted a portrait of Jacopo Ligozzi (now lost), discussed by Jacoby (ibid., p. 229, under cat. no. 79). 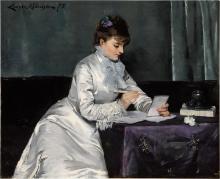 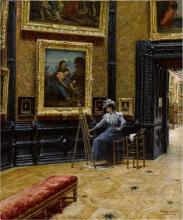 An Elegantly Dressed Copyist at the Louvre 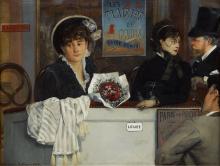 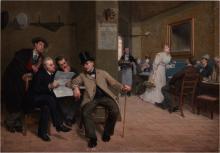 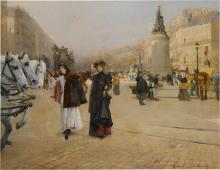