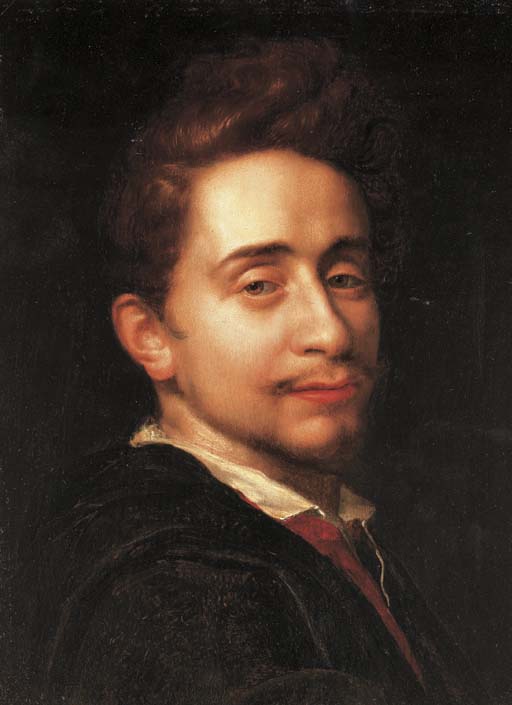 This hitherto unrecorded panel is an important addition to Hans von Aachen's oeuvre as a portraitist and seems to date from circa 1590-5, when he had developed his mature style fusing both northern European and Venetian influences. Whereas the face is quite tightly modelled, the immediacy of the brushstrokes in the hair and collar recall Venetian portraiture.

The directness of the sitter's gaze and intimate nature of the characterisation has led to suggestions that the present sitter
may be a fellow artist. Von Aachen painted several portrait of artists, such as Gaspar Rem (Kunsthistorisches Museum, Vienna), Bartholomäus Spranger (Uffizi, Florence), and Joseph Heintz the Elder (Národni Galerie, Prague). Interestingly, his Self-Portrait in the Palazzo Pitti, Florence shares some physiognomical similarities with the sitter in the present portrait.

One of von Aachen's earliest portraits, that of Gaspar Rem (datable to circa 1574-5), clearly shows the influence of Venetian portrait painters such as Jacopo Bassano in the use of thick and broad brushstrokes and the dominant use of warm brown tones. His later portraits show a fusion of both his native German style and what he had learned in Italy. This is exemplified by a portrait, dated 1592, of Octavian Secundus Fugger (Fugger Museum, Babenhausen). The northern European characteristic of the stiff pose contrasts with the lively manner in which the paint is applied.

Hans von Aachen, together with Batholomäus Spranger and Joseph Heintz the Elder, is best known as one of the main exponents of the late Mannerist style at the court of the Emperor Rudolf II at the beginning of the seventeeth century. His output ranged from paintings of historical and religious subjects to allegories, genre scenes and portraits. Von Aachen reached the court in Prague in 1592, at a relatively late stage in his career, at the age of forty. The present painting is believed to date from the period prior to his appointment as court painter to the Emperor Rudolf II.

Born in Cologne, von Aachen became a member of the Cologne guild of painters in around 1573 and travelled to Italy a year later where he was a pupil of Gaspar Rem in Venice. Later he joined other northern artists, such as Otto van Veen, Joris Hoefnagel, Paul Bril and Joseph Heintz the Elder in Rome, copying antique sculptures and the works of Italian masters. From 1582-3, he worked in Florence, obtaining numerous portrait commissions, including some for the Medici family. In 1587, von Aachen went to Augsburg where he executed a number of portraits of the Fugger family and by 1589, he was working in Munich, where he produced portraits, altarpieces and allegories for the ducal family.