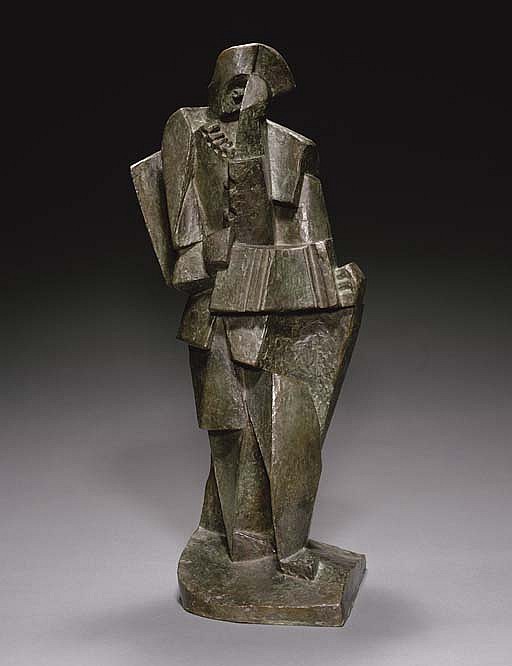 Although Jacques Lipchitz's sculptural training was highly traditional and academic, his art's direction was forever changed by a meeting with Picasso around 1914, and the friendships he developed thereafter with other Cubists. Almost immediately, Lipchitz turned away from representing the classical human form, and began treating the human figure as an accumulated construction of interlocking and simplified geometric masses.

In 1916 Lipchitz met and befriended Juan Gris and, significantly, signed a contract with dealer LÃ©once Rosenberg, who also represented Picasso, Braque, Gris and Rivera. This placed Lipchitz in the pantheon of "true Cubists," and at the forefront of Cubist sculpture. Rosenberg arranged to pay Lipchitz three hundred francs a month and to cover his expenses, in exchange for his sculptural production. For the first time in his life, the artist attained some sense of financial security. He could now afford to work in stone, and he began to cast in bronze as well.

The war years were tumultuous ones for the Russian-born sculptor, but soon after the armistice he undertook one of his most important series. The group of seated and standing figures concentrated on traditionally French subject matter: bathers, musicians, and harlequins. Lipchitz said, "One of the first sculpture made in 1919 was Harlequin with Accordion. It reflects my interest in eighteenth-century painting, particularly that of Watteau." (in My Life in Sculpture, New York, 1972, p. 58)

Like many other artists during, and immediately following the First World War, Lipchitz was thinking in terms of a classicizing principle, the "return to order." Among others, Jean Cocteau had influentially advocated a 'return' during these years to the sculpturally solid forms found in classical art. In painting, this manifested itself in the "crystal" phase of Cubism (as seen in the work of Gris and Severini). Lipchitz observed, "The Pierrots and harlequins were part of our general vocabulary, characters taken from the commedia del l'arte, particularly popular in the eighteenth century. We may have been attracted to them originally because of their gay traditional costumes, involving many different varicolored areas" (ibid.).

He continued, "In my use of musical instruments, there may have been a particular feeling of guilt; I remember that when I was a child and my parents wanted me to learn to play the violin, I became angry with my teacher and broke the fiddle over his head. That was the end of my musical career, and I may have been trying to make amends. I think I was also affected by the eighteenth-century boiserie decorations that were so common in old French houses" (ibid., p. 57).

In the current sculpture, Lipchitz's faceting of planar elements is complex and nuanced. Yet the fragmented forms also build up the structure of the figure in a manner that is unambiguous and constructive. The figure is easily readable as a harlequin, and the parts never distract from the whole. As the inaugural sculpture of one of Lipchitz's most masterful Cubist series, this figure is absolutely monumental in effect.