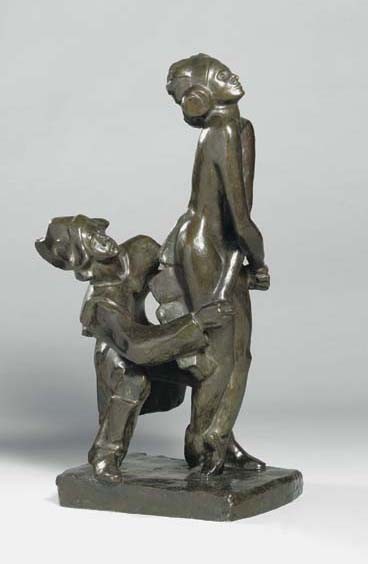 with Leicester Galleries, London.
Mrs Rosemary Peto, by whom donated to the Friends of the Courtauld Institute.
Anonymous sale; Christie's, London, 4 June 1971, lot 149 (1400 gns. to Leese).

The artist was commissioned by Julian Lousada to produce this group showing Adolph Bolm and Tamara Karsavina in the Ballet Russe production of Stravinsky's The Firebird which was performed in London for the first time during the Ballet Russe season from 12 June to 1 August 1912. The sculpture depicts the moment when Ivan Tsarevitch captures the Firebird. Gaudier made two plaster casts from the original clay. Lousada received a plaster and paid £20 for one bronze cast, the highest price paid for any of his works in his lifetime. This cast was destroyed by bombing during the Blitz and ten casts were subsequently produced from the extant plaster (see E. Silber, op. cit., p. 254).

Notice Regarding the Sale of Material from Endangered Species. Prospective purchasers are advised that several countries prohibit the importation of property containing materials from endangered species, including but not limited to coral, ivory and tortoiseshell. Accordingly, prospective purchasers should familiarise themselves with relevant customs regulations prior to bidding if they intend to import this lot into another country.