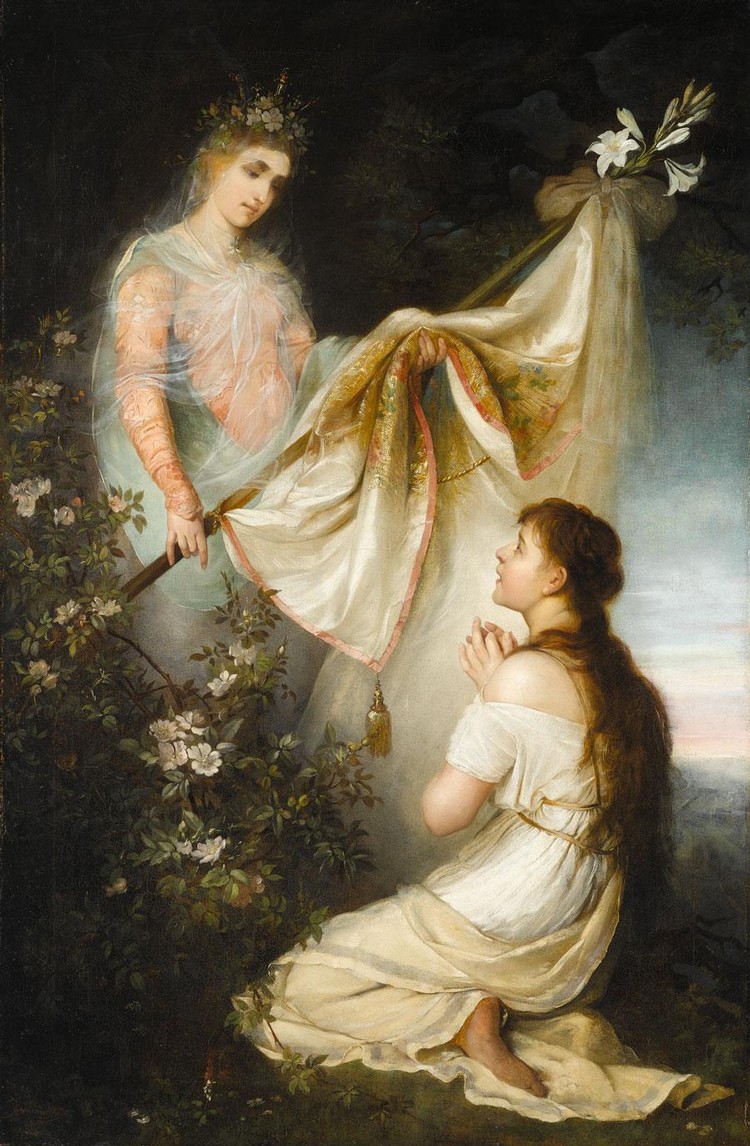 At a time when many artists were rebelling against the traditional values of the Imperial Academy of Arts Henri Semiradsky created some of the finest paintings epitomizing the ideals of nineteenth century salon painting. In 1872 he moved to Rome after winning a seven year scholarship from the Imperial Academy of Arts, where he had flourished under his first teacher Karl Bruillov. One of his first compositions painted in Italy, Christ and the Sinner, 1872, commissioned by the Grand Duke Vladimir Alexandrovich, the president of the Academy, brought Siemiradzky success and fame throughout Europe and eventually made its way into the collection of Tsar Alexander II.

The subject of the present work is Joan of Arc, the patroness of soldiers. She was born to pious parents of the French peasant class in 1412. From a very early age she experienced religious visions and in May 1428, she heard the voices of Saints Catherine, Michael and Margaret instructing her to drive the English out of France and bring the Dauphin, later Charles VII, to Rheims for his coronation. After overcoming opposition from churchmen and courtiers, the seventeen-year-old Joan of Arc was put in charge of a small army and raised the siege of Orleans on May 8 1429. She enjoyed a series of spectacular military successes, during which Charles VII was able to enter Rheims and be crowned with Joan of Arc at his side. In May 1430 she was captured by the Burgundians and sold to the English. After months of imprisonment, she was tried at Rouen by a tribunal and condemned to death as a heretic, sorceress, and adulteress. She was burned at the stake on May 30, 1431. A posthumous retrial opened as the Hundred Years War ended and the court declared her innocent on 7 July 1456.

Traditionally in nineteenth century Academic painting Joan of Arc is depicted as a victorious heroine in full armour carrying a banner and a sword, as in Jean-August-Dominique Ingres' famous Joan of Arc at the Coronation of Charles VII (fig.1).Siemiradsky, however, portrays Joan of Arc as a young girl kneeling before Saint Catherine. The Saint presents her with a banner surmounted by lilies. The lily, an emblem of the kings of France, refers directly to Joan of Arc's mission to lead Charles VII to Rheims for his coronation. The banner is the most frequently used attribute for Joan of Arc and is said to have depicted God holding the world, pictured as an orb, flanked by the kneeling figures of Saints Michael and Gabriel, each presenting a lily. Joan of Arc carried the banner in every battle she fought, and would later state "I loved my banner forty times more then my sword".

Siemiradzky's main concern was that his art should recreate an authentic representation of the past. His depiction of Joan of Arc's religious vision emphasises her mystical experience and religious devotion as opposed to the iconic figure associated with her name. Here, Joan of Arc appears believably human, humbly kneeling to accept her fate.