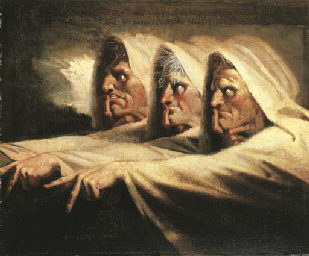 The Three Witches, or the Weird Sisters inscribed in Greek on the reverse of the canvas oil on canvas 243/4 x 301/4 in. (62.8 x 76.9 cm.) PROVENANCE H. Farrer, London. The Fountaine collection, Narford Hall, Norfolk. Anon. Sale, Sotheby's, London, 14 July 1976, lot 20. with Christopher Gibbs. Donald Munson; his sale, Christie's, London, 4 May 1995, lot 51 (œ220,000). NOTES The picture illustrates the passage in Macbeth, Act I, scene 3 where Banquo enquires:...What are these, So wither'd and so wild in their attire, That look not like th' inhabitants o' th' earth, And yet are on't? Live you? or are you aught That man may question? You seem to understand me, By each at once her choppy finger laying Upon her skinny lips: You should be women, And yet your beards forbid me to interpret That you are so. Fuseli exhibited a picture of this subject at the Royal Academy in 1783, probably that now in the Kunsthaus, Zurich (see G. Schiff, Johann Heinrich Fussli, Zurich and Munich, 1973, no. 733); that composition was engraved in mezzotint by John Raphael Smith, published in March 1785 as ' The Weird Sisters/-each at once her choppy finger/laying upon her skinny lips ' (D.H. Weinglass, Prints and Engraved Illustrations By and After Henry Fuseli, Aldershot and Brookfield, Vermont, 1994, p. 77, no. 73), and again in stipple by Peltro W. Tomkins, published 30 August 1786 by T. Macklin (see D.H. Weinglass, op.cit, p. 78, no. 73A). Schiff lists three other versions, respectively in the Royal Shakespeare Theatre, Stratford-Upon-Avon (G. Schiff, op.cit, no. 734); the North Carolina Museum of Art (G. Schiff, op.cit., no. 735); and with A. and F. Kirchheimer-Bollag, Zurich (G. Schiff, op.cit., no. 736) and now in a private collection, Rome. The picture at the North Carolina Museum is now thought to be a copy after that recorded with Kirchheimer and Bollag. The present work is not listed in Schiff, but is to be included in the forthcoming updated English language edition of Schiff's 1973 catalogue raisonn‚, edited by David H. Weinglass. Dateable to circa 1785-7, it differs substantially from the other known versions, all of which approximate to the image in the engraving. The features of the witches are highly expressive and less caricaturistic. The draped head coverings contrast with the far more structured bonnets or bonnet-like cowls, as does the level gaze of the three heads, and the long skeletal fingers of the left hands making pointing gestures and the more uniform placement on the lips of the finger of the right hands. Men often played the part of the witches on the 18th-century stage and here it is clear that the figures are male rather than man-like crones. Fuseli also painted the three witches with Macbeth and Banquo (G. Schiff, op.cit., no. 737). The inscription in Greek on the back of the relining canvas, and repeated on the frame, is presumably a copy of a now hidden inscription on the back of the original canvas. Taken from Aeschylus' Eumenides, it translates as ' These are Women but I call them Gorgons ', or ' Women? Nay, never women! Gorgons more ' (G. Murray, The Complete Plays of Aeschylus, London, 1952, p.205). For another use by Fuseli of a Greek text, apparently to widen the reference of a non-classical subject, see the drawing of Brunhild watching Gunther suspended from the Ceiling, 1807 in the Castle Museum, Nottingham (G. Schiff, op.cit., no. 1381). It would appear that the painting entered the Fountaine collection during the lifetime of Brigg Price (d. 1825), the great-nephew of the eminent connoisseur and collector, Sir Andrew Fountaine (1676-1753). Price assumed by Act of Parliament the surname of Fountaine, and the picture is recorded in the Billiard Room at Narford Hall in J.P Neale's Views of the Seats of Noblemen and Gentlemen in England, Wales, Scotland and Ireland, London, 1818-1823. An old Christie's stencil on the stretcher confirms that the picture was still in the Fountaine collection in 1894. We would like to thank David H. Weinglass and The Manuscript Department, British Museum, for their help in preparing this catalogue entry.