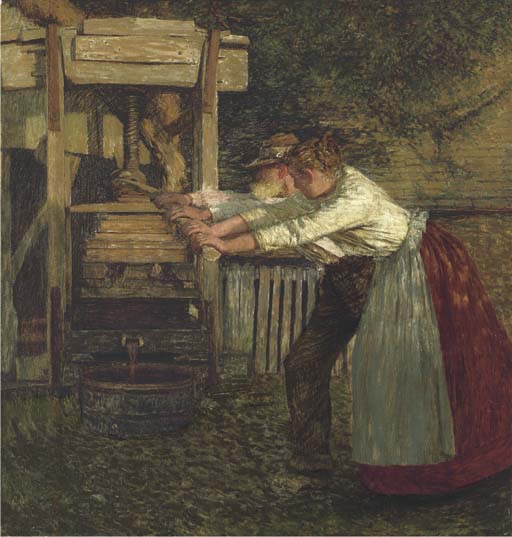 Following the successful placing of his much admired Man with the Scythe, 1896, (Tate Britain) in the national collection, La Thangue embarked upon a series of monumental canvases depicting aspects of country life. These included Travelling Harvesters, 1897, (private collection), The Gleaners, 1898, (Aberdeen Art Gallery), The Harvesters' Supper, 1898, (Bradford Art Gallery) and Cutting Bracken, 1899, (Laing Art Gallery, Newcastle upon Tyne). 1 Having recently moved to Graffham, on Lavington Down in Sussex, he was acutely aware of the rituals and customs which sustained the rural labourers' way of life. 2 The nearby village of Lodsworth was renowned in the area for its orchards and a hundred years earlier had supplied cider for the table of Lord Egremont at Petworth. Nevertheless cider was never regarded as an aristocratic drink. During the nineteenth century its consumption was associated with rural labour and the provision of a cider allowance was a common practice. It was not unknown for labourers to refuse a wage increase at the expense of their cider allocation. 3 At this period, in canvases by Clausen and La Thangue, and in the photographs of Peter Henry Emerson, reapers were often shown carrying a stoneware jar used expressly for such a purpose.

Cider-making was thus an essential activity. It was carried out in October in the Home Counties' villages. Its processes were essentially simple. Apples were gathered in baskets and were hand-milled in a chawling machine to create a juicy pulp or 'pomace'. The pomace, known as a 'cheese' was soaked and placed in layers, interleaved with muslin or straw, in a press, and then came the 'back-breaking, sinew-creaking work for two men who had to heave and push on the crank, and the more apples they could press - almost a ton - the better'. 4 In the present picture of course, a sturdy young countrywoman replaces one of the men.
During the late nineteenth century, as the countryside lost much of its population to industrial cities, it was often recognized that women were an integral part of the rural workforce and would frequently carry out tasks formerly reserved for men. 5 At the cider press, the woman's strength and energy was equal to that of her male partner. Both, in the present case, push on the crank in unison, to the same degree. The task could take up to three days, after which the pomace residue was fed to the cows. Although it appears not to be the case in the present instance, cider-presses were often fitted with wheels and in the south of England and the Welsh borders, were taken from village to village during the season - which in some areas could last up to December. Those fortunate enough to have orchard-allotments would bring their crop to be milled and pressed, and would share in the communal yield. 6

It appears however, that this particular Graffham mill was a fixed structure, possibly used by all the tenant labourers and thus enabling the artist to observe local models who appear in other works of the period. La Thangue is likely to have viewed the collaboration of men and women in fieldwork as a positive strength, enforcing social and familial cohesion. It was one of the leitmotifs of the novels of Thomas Hardy, drawing its origin from the Biblical tale of Ruth and Boaz. 7 In La Thangue's work the theme of peasant couples working together takes us back to the controversial In the Dauphiné (Anonymous sale; Christie's, London, 26 November 2003, lot 26), the most important painting in the first New English Art Club exhibition in 1886, and it looks forward to his untraced Love in the Harvest Field of 1899. Having placed himself outside the Royal Academy in the eighties, La Thangue returned to it in the summer exhibition in 1891, with fellow New English radical, George Clausen. His achievement of critical acceptance came five years later with the purchase of The Man with the Scythe (Tate Britain).

Thus, at the time of his election as an Academy Associate in January 1898, it was widely recognized that La Thangue was painting with great strength of purpose. 8 Expectations for the forthcoming summer exhibition were high and they were not disappointed. Contrasting subject pictures by Edwin Austin Abbey, Frank Dicksee, Samuel Melton Fisher, Herbert Draper and John William Waterhouse, with 'the painters who are opposed to this school', The Illustrated London News noted that these latter artists were 'worthily represented by Mr George Clausen and Mr H.H. La Thangue'. Both 'render tribute to the dignity of labour in the fields'. 9 Other critics greatly favoured The Sussex Cider Press - listing, in the case of The Academy, the picture as one of the best paintings in the exhibition. 1 0 The Studio concurred, expressing the opinion that he was 'exhibiting three pictures which show his peculiarly individual method at its best...'

'His Sussex Cider Press is even more satisfactory (than the other exhibits) as a technical exercise, and is certainly more attractive as a subject. The picturesque details and quaint irregularities of the old press, which is being laboriously worked by a man and woman, have given him opportunities for clever devices of handling, and have allowed him to exercise his feeling for deep combination of colour'. 1 1

Elsewhere critics commented upon the degree to which La Thangue's work measured up to that of John Singer Sargent who, in the same Academy exhibition was showing his masterly portrait of Asher Wertheimer, (Tate Britain). 1 2 Sargent too had recently been co-opted into the ranks of the Academy. The influential D.S. MacColl seized the opportunity to criticize the institution's conservatism, praising the election of La Thangue and Sargent, and asking his readers to, 'Think of the present exhibition without such lustre as he and La Thangue shed on it'. 1 3 Both of these artists, he reminded his readers, had been trained in France and both had shown at the New English Art Club. Their careers had not been dependant upon the favours of academicians, and to some extent, they were accepted with reluctance. This was to become a chorus in 1898, and in other reviews there was a call for genuine works of art, like those of La Thangue and his contemporaries, to be separated from the general mêlée of popular potboilers involving babies, cavaliers and old soldiers.

However, it was the taught composition of A Sussex Cider Press which won the plaudits of discerning commentators. Conscious of its broad readership, The Graphic referred to,

'the somewhat mannered art of Mr La Thangue... shown at its best in this year's work - in four works recording with unfeigned sympathy and sincerity the weary, toilsome, painful labour of the sons and daughters of the soil. Bracken is perhaps the most successful for expression, and A Sussex Cider Press for composition.' 1 4

The Magazine of Art took up this point and came down solidly of the view that,

'... only in A Sussex Cider Press do we find him quite at his best. There is here much of the sentiment of Millet, but all the silveriness is lost in a brownish atmosphere composed of a cloud of carefully-marshalled but perfectly visible touches. Such is the impression which the beholder carries away...' 1 5

Sadly such activities were under threat not simply by the general decline of British farming, but by the increasing industrialisation of the process of cider manufacture - such that by the Second World War, farm-based cider pressing had died out. Sensing these changes, La Thangue, although he retained his base at Graffham, within a few years, moved his artistic production to Provence and Liguria. It was nevertheless the case that A Sussex Cider Press spawned a series of related works which describe other aspects of the process. The following year for instance, he exhibited Cider Apples, 1899, (Art Gallery of New South Wales). This was followed by A Sussex Orchard, 1905, (private collection) and four years later by Shaking down Cider Apples, 1909, (not traced). Milling Cider Apples, 1905, (National Trust, Standen) is even more closely related to the present work, since it represents the preliminary process of making pomace. 1 6 However, for all its energy, this work lacks the formalist strength of A Sussex Cider Press. What we experience in this vigorous push on the crankshaft of the press is one of the undoubted high points of a remarkable career.

We are very grateful to Professor Kenneth McConkey for providing the above catalogue entry.