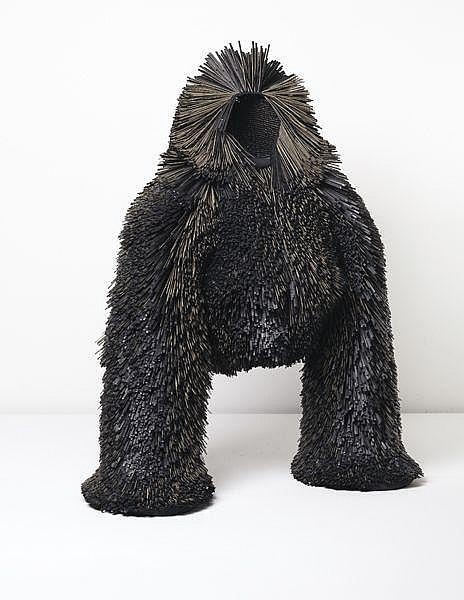 Man personifies what he can’t apprehend: water, weather, the numen inside stone. Animals, too, are easy prey, so close to us in scale and mien. We lend them our attributes and freely borrow theirs; we say lionhearted or wise as an owl. Foreign bodies become less so when inhabited. Ancient Egyptians pulled Horus, god of sky, to earth, but they also gave him wing. Half falcon, half man, he represented the breadth of human imagination and its limits. Conversely, man has always lost himself in ritual costumes and disguises: Norse Berserkers wore bearskins into battle and fought with animal rage; Kwakiutl shamans, aided by raven masks, ascended to higher states. Ever since Zeus turned Lycaon into a wolf, shape shifters and baleful gluttons have stalked the edge of sleep and reason. They threaten to devour us—but we have conceived them.

With its arched layer of fluting, corrugated cardboard cushions against hard knocks. Devoted to the material, French artist Lilian Daubisse included only cardboard in his 2007 solo show at Arums Galerie in Paris. Of the eight works, "Hérisson" (2004), or "Hedgehog," furthered the notion of protection: hedgehogs bristle with thousands of hollow spines. "Hérisson" comprises hollow cardboard quills applied to a polyester string shell. Beyond its animal likeness, Daubisse’s hooded waistcoat references those shamanic costumes that evoke animal spirits by displaying their remains (The Russian Museum of Ethnography, for example, includes in its collection a Siberian robe with applied owl wings, squirrel pelts, and reindeer beard). Like a tutelary spirit, "Hérisson" watches over its wearer and guards his identity.

Closer to home, "Hérisson" calls to mind the recent work of American artist Nick Cave, whose acclaimed "Soundsuits" stride (literally) across broad ground: sculpture, fashion, performance, and sonic art. Cave crafts his head-to-toe suits from found articles—buttons, twigs, sequins, wire. He displays them, wears them, dances in them. His suits are an extension of the wearer’s body and an escape from it. Like them, and unlike every other autonomous object in this catalog, "Hérisson" breathes when its wearer breathes, but it needn’t move in order to move us.