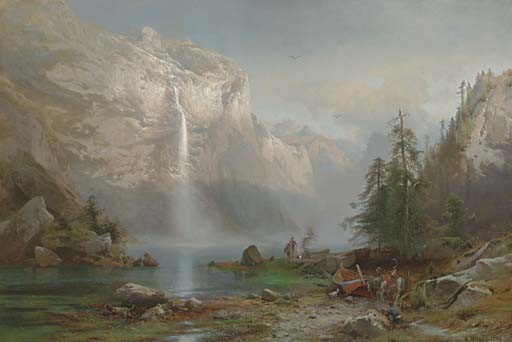 PROPERTY FROM A TEXAS ESTATE

Born in Germany in 1831, Hermann Herzog studied in Düsseldorf and traveled extensively throughout Europe, painting distinct views of fjords, lakes and mountain landscapes, distinguishing himself from his contemporaries who focused on genre scenes of picturesque villages. In the tradition of Albert Bierstadt, George Caleb Bingham, Eastman Johnson and Worthington Whittredge, Herzog drew from his Düsseldorf training and would later align himself with the Hudson River School aesthetic. The present work, Mountain Lake Camp dates from 1868 and is most likely one of the last Alpine scenes Herzog created before immigrating to Philadelphia at the end of the decade. Mountain Lake Camp is executed on a grand scale and masterfully captures a sublime landscape that demonstrates Herzog's sensitivity to light and atmosphere.

In an undated article, The Philadelphia Press commented on Herzog's works: "His subjects are all taken from nature, without, however, being 'views.' He possesses a power of selection that is equivalent to creation, and his works, painted out of doors, have the unity of purely ideal compositions. His faculty of catching, at a glance, all that is characteristic in the motive before him, of choosing the most effective illumination, and even the most favorable season and time of day, assisted by a rapidity of execution which enables him to seize and fetter the most transient phenomena of light and shade -- of clouds that pass and of wind-swept water -- amount to genius, and makes his pictures unique among landscapes...Yet, withal, there is no affectation -- of poetry or sentiment -- nothing 'sought' or forced. The effect may be heightened by what is suggested but it depends finally upon the thoroughness of the workFew men have cared less for notoriety; as modest and industrious, he has built his reputation upon his work alonehis habit of constant study, of going to nature for even the slightest detail, keeps his work fresh and original." (as quoted in Chapellier Galleries, Herman Herzog, 1831-1932, exhibition catalogue, n.d., n.p.)

The present work, Mountain Lake Camp, stands out in Herzog's oeuvre for the monumentality of the scene; choosing a low level shadowed foreground, the artist elevates the landscape to splendor by opening the scene to a light-filled middleground and expansive background, reinforced by the sheer scale of the canvas, nearly four feet in width. Herzog has skillfully rendered two figure groups, including three trappers by a brilliantly illuminated campfire and two additional figures in the right foreground assembling the contents of their camp. These individuals provide a subordinate yet integral role to the scene, underscoring the majestic scale of nature. The dynamism of the waterfall cascade further portrays the many varying moods of nature juxtaposed against the serene reflection in the calm surface of the lake. The awe inspiring landscape captured in Mountain Lake Camp is a stunning and rare example illuminating the dramatic grandeur most sought after in Herzog's work.