Lot 53: Holocaust - "My dear son! This letter is the last words of your father to you..." - The last letters of a person sentenced to death during the Holocaust 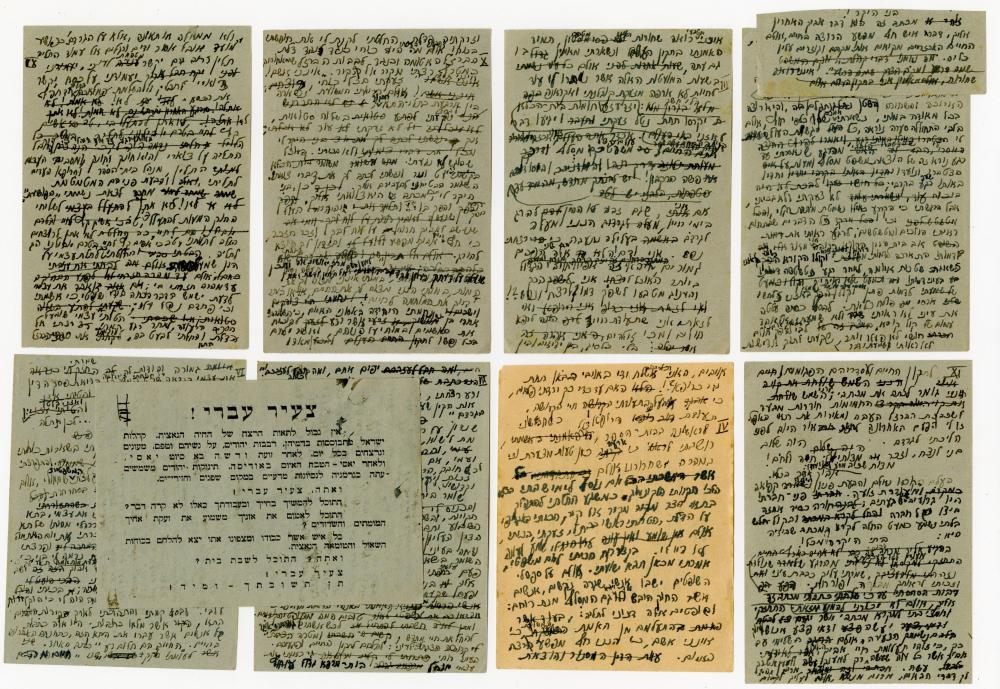 Holocaust - "My dear son! This letter is the last words of your father to you..." - The last letters of a person sentenced to death during the Holocaust

Lot 53: Holocaust - "My dear son! This letter is the last words of your father to you..." - The last letters of a person sentenced to death during the Holocaust

10 pages, including the last words written by a Jew sentenced to death by hanging, before his execution during the Holocaust. The instructive and hard things to read he wrote to his son on the back of printed pages that turn to a "Hebrew youth" and inform the public about the crimes of the Nazi beast in Germany. From the things it seems that the writer was a doctor in his profession as he writes: "I whose life certificate was to cure the sick" but we could not find out the identity of the writer, nor whether he was eventually executed as appears from the letters written in his last days. Creepy and hard-to-read documentation. The letter opens with the words: "My dear son! This letter is the last word of your father to you, the word of an innocent man who wants life, but the cruel life vomits him out of their midst and destroys him ..." . The person describes how he was accused of no wrong in his palm for murdering any person, and in this charge he was sentenced to death: "I that even a fly did not dare to kill in my lifetime uploaded to a gallows in a despicable plot that I murdered a soul", and describes the moments in court in which his sentence was pronounced dead: "I kept myself quiet while reading the long verdict ... but I opened my eyes and listened to the judge ..." Killer! I cried out with the rest of my strength towards the monster in front of me, but I fell to the ground, I felt dizzy ... ". and goes on to describe how afterwards :" I did not shout or cry, but I felt like the ground was falling under my feet ... I saw and heard nothing ... " Later the writer describes his hard feelings in the prison cell :" When my consciousness returned to me I found myself in a new cell, a cell sentenced to die ... I remembered yesterday in court ... and burst into tears as a small child ... what My power against the sealed iron door and against the iron hearts behind it like crazy I ran from wall to wall "I'm not guilty!" "I'm not guilty!" And he continues to address his son: "Remember, remember that your father was innocent and maliciously executed." The writer ends his letter with the words: "I finish writing my letters, the warm rays of the sun penetrate through the thick layer of iron and illuminate the dark cells, this is the last time I have daylight before I went to the gallows, goodbye my son forever ... your father who is in prison." and adds a few lines in which he addresses briefly to his daughter "My dearest daughter of all! When I come to you this letter I will no longer be in the land of the living" The continuation of the letter addressing his daughter is apparently missing. [10] pages. Pages 13x10 cm. Deletions and corrections in the writing sequence. Very good condition.

Request more information
Contact: Dynasty
Auction: Eretz Israel, Zionism, Holocaust, Judaica
Auction Date/Time: October 18, 2021
Lot 53: Holocaust - "My dear son! This letter is the last words of your father to you..." - The last letters of a person sentenced to death during the Holocaust
Cancel

The 'Auction House Dynasty' acts as an extension on behalf of the auctioneer.

Dynasty will publish a catalog for each auction describing the items offered for auction, their numbers and opening price. The data in the catalog is intended to be used for informational purposes only and does not contain any responsibility for the description, attribution, previous owners, period, source or any other detail.

The prices listed beside the items are minimum prices and do not constitute an estimate.

A person will be appointed to the role of sales manager, who will be responsible for conducting the auction and managing it

The sales manager has the right to prevent participation in the sale from people who do not want to participate in the sale. As well as the sole authority to determine who won the sale, cancel the sale of an item (even after its sale), or resubmit it for sale at its sole discretion. In addition, the sales manager may add or remove an item from the sale, or change data regarding an item offered for sale according to new data received after the catalog is printed.

The 'hammer price' for the purpose of the auction means the amount specified as a buyer's bid by force whose offer has been made under these terms. Immediately after the hammer is placed and the purchaser's number is declared forcefully by the sales manager, the bid of the purchaser shall be deemed to have been accepted, and the item presented in the sale shall become the property of the bidder, subject to the fulfillment of his full obligation to pay as specified herein. The purchaser has been accepted bid will pay to Dynasty a commission at the rate of 25% of the hammer price plus VAT (on the commission). Payment will be made in cash

An overseas resident is exempt from paying the VAT, only if the item purchased is sent abroad.

It is the responsibility of the Buyer to arrange for the removal of items purchased directly from the offices of the Dynasty, or by courier or courier company on his behalf. In the event that the purchaser requests Dynasty will pack and ship the items at a full fee at the buyer's expense. For packing and shipping rates, contact the Disney offices. The price depends on the type of packing, the shipping company, and the destination country.

Payment in shekels for an item whose price is denominated in US dollars shall be calculated according to the exchange rate (the representative rate) of the United States dollar published by the Bank of Israel on the date of the auction.

Dynasty is responsible to the buyer for providing information regarding the nature of the item, its originality, and its condition. However, it is hereby clarified that the information provided is based on the expertise of Dynasty and on their investigation as much as they can reach, and according to accumulated experience. The purchaser is required to check for the condition, size, origin, nature and value of the item during the presentation of items to the public on the dates set for each sale. However, the winning purchaser has the right to obtain Dynasty regarding the originality and condition of the item no later than 30 days from the date of auction. If it is proved to dynasty that there has been a mistake in the information provided regarding the item, a creditor will refund to the winning purchaser the amount paid for the return of the item to its possession. If the item is returned to Dynasty's possession, the buyer will have no additional claims or demands.

The Buyer undertakes to complete the payment obligations no later than one Business Week from the date of auction. The delivery of the item to the buyer's possession will be done after the purchaser has completed its full payment obligations.

Dynasty will represent free of charge customers who are unable or unwilling to participate in the actual auction. Customers who wish to participate in the auction by phone must contact Dynasty before the auction. However, any failure in connection with such representation does not impose on Dynasty or any of its employees or employees any liability of any kind whatsoever.

The Jerusalem Courts have sole and exclusive jurisdiction in any dispute relating to matters relating to the purchase or delivery of items between dynaty and the buyer.

The rights to the pictures in the catalog are reserved for Dynasty.

A customer who has been approved to participate in the auction will receive a purchaser's number through which he will bid on the items he is interested in. When making an actual bid by pressing 'Place Bid', the customer agrees and accepts that his bid is final and is in no way entitled to change the withdrawal from his bid, which includes the 'hammer price' in addition to the buyer's commission as mentioned above, As well as the other expenses related to the acquisition as written above.
When bids are received during the auction not via the Internet (ie, by telephone or by an audience present in the sale room ), these bids will be displayed using the computer as 'Offers in the Room'. When two identical bids were received one online and the other as a 'proposal in the room' the proposal received in the room has precedence.
In the case of differences of opinion, the Hebrew version is the determining factor.