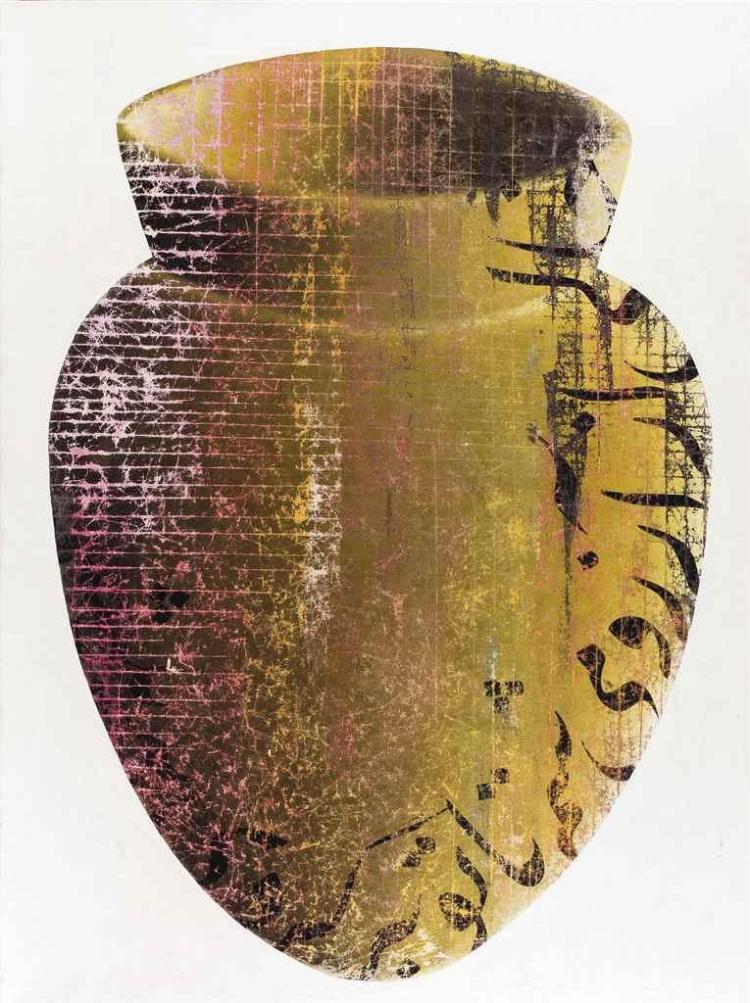 Lot 112: I will have no more wishes if you come back to ME

Galerie Kashya Hildebrand, Zurich. Acquired from the above by the present owner.

Contemporary artist Farhad Moshiri's incredible artistic technique is art in itself. His ability to crush and fold his canvas in a unique manner, thus causing the paint to flake off, is in fact a metaphor for the artist's ability to mould traditional mediums or ideas and make them anew while still revealing traces of their past. The way the artist manipulates a canvas to create luminosity and dimensionality in something as simple as the portrayal of a jar is truly remarkable. Christie's is delighted to offer the present lot, a spectacular painting by the famous and internationally acclaimed Iranian artist. The beauty of the present lot lies in its simplicity of form and exquisite texture. Moshiri is renowned for his stunning and unique depictions of Jars - each one more extraordinary than the next. The jar is a vessel, much like the human body, that can store and protect all of its contents. The jar's mouth is open and ready to take in all that is placed inside it. This depiction puts particular emphasis on the sheer beauty and significance of the object, not just its utility. The craquelures of the iridescent paint give the jar its rich texture, which at once makes the object appear beautiful as well as ancient and important. In the present work, the crackles are strong - the shadow and light are different from one side of the jar to the other and thus appear organic, as if the paint of the jar has slowly worn away with time, underscoring the element of chance involved in the artist's technique. The juxtaposition of the ancient with splendour and richness is furthered by the green hues of the vessel that gives it an expensive, yet antiquated look. The cracked paint gives the object an overall delicate and fragile look, thus reinforcing its connection to life and its vulnerable nature. Moshiri ingeniously employs a subtle image to convey a deep and beautiful message about life and heritage. Jars and similar wares have historically had a duality of form and function, wherein they have not only been used as objects of utility, but also as decoration. Moshiri has cleverly furthered this notion of jars as ornamentation by depicting it on a flat surface, to propose that the mere concept of a jar, even one painted on a flat surface with only a hint of roundedness, encompasses its value as an object of beauty. The calligraphic text on one side of the objects creates a dialogue between this jar and jars from the bygone eras, where poetry as well as sacred and ceremonious texts were inscribed on such treasured objects. Moshiri's recurring motif of jars throughout his oeuvre also reveals the artist's fascination with archaeology and Persian history. Ceramic or bronze wares and pottery have been integral parts of ancient cultures, their traditions and the arts. From the fragmentary remains at Susa, almost 6000 years ago, to Sassanian vessels just pre-dating Islam, to the technically advanced wares of 13th century Seljuq potters and 17th century Safavids, Moshiri's inspiration ranges from glorifying his homeland's golden age to a satire of Iran's obsession with Western and modern culture. This furthers the notion of the artist's extraordinary ability to take a historic or ancient motif and seamlessly apply it to modern times, thus increasing its relevance. Moshiri's reasoning behind his depiction of jars reveals the artist's deliberate and conscious decision making: 'I had picked as a subject matter an object that was the first man had made and here I was, thousands of years later, doing the same thing again, despite every revolution, all the changes that had happened' (The artist quoted in W. Singh-Bartlett, "Farhad Moshiri When Ancient becomes Modern", in Canvas magazine, vol. I, no. 5, September- October 2005, pp. 76-79). One of Moshiri's finest jars to come to auction, the present work titled I will have no more wishes if you come back to ME speaks volumes about its connection with the historic past, its universal shape, its duality of form and function as well as its connotations with life, love, nature, antiquity, culture, tradition, poetry and the arts.

Request more information
Contact: Christie's
Auction: Modern & Contemporary Art
Auction Date/Time: October 20, 2015
Lot 112: I will have no more wishes if you come back to ME
Cancel