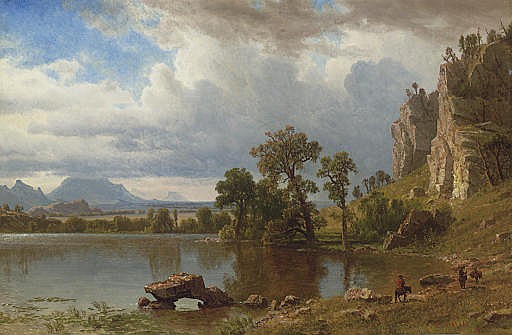 Property from a Private American Collection

On occasion, Christie's has a direct financial interest in lots consigned for sale which may include guaranteeing a minimum price or making an advance to the consignor that is secured solely by consigned property. This is such a lot. This indicates both in cases where Christie's holds the financial interest on its own, and in cases where Christie's has financed all or a part of such interest through a third party. Such third parties generally benefit financially if a guaranteed lot is sold successfully and may incur a loss if the sale is not successful.
Albert Bierstadt's paintings of the untamed American West are some of the most significant historical and artistic accomplishments of the nineteenth century. While other artists had made expeditions throughout the area as early as the 1830s, few could rival Bierstadt in his ability to convey the grandeur of this wondrous region to the American public. Painted from sketches of his 1860s trips west, In Platte River Country depicts an expansive landscape populated only with two unobtrusive men on horseback in the lower right corner. The light is vivid, emphasizing Bierstadt's vision of a pristine West.

As early as 1859 Bierstadt traveled the frontier with Colonel Frederick Lander's U.S. Government Expedition. Following the Platte River to the Wind River Mountains, the artist first witnessed the grandeur and beauty of the unspoiled western landscape. However, it was Bierstadt's 1863 overland journey to California which provided him the pictorial material used to create some of his most successful works. Accompanied by Fitz Hugh Ludlow, a prominent figure in the New York literary circles, Bierstadt traveled a southerly route arriving in San Francisco in July. After several days in the city, Bierstadt and Ludlow, joined by the artists, Enoch Wood Perry and Virgil Williams, ventured to Yosemite via the Mariposa Grove of giant Sequoias. Camping and sketching for seven weeks, Bierstadt gathered ample material to complete several major oil paintings during the next eight years in New York.

The remarkable and raw American landscape captivated Bierstadt, who described it in one of the many letters he sent back east for publication in The Crayon : "If you can form any idea of the scenery of the Rocky Mountains and of our life in this region, from what I have to write, I shall be very glad; there is indeed enough to write about--a writing lover of nature and Art could not wish for a better subject. I am delighted with the scenery...We see many spots in when we look up and measure the mighty perpendicular cliffs that rise hundreds of feet aloft, all capped with snow, we then realize that we are among a different class of mountains; and especially when we see the antelope stop to look at us, and still more the Indian, his pursuer, who often stands dismayed to see a white man sketching alone in the midst of his hunting grounds." (as quoted in G. Hendricks, "The First Three Western Journeys of Albert Bierstadt," The Art Bulletin , September 1964, p. 337)

In In Platte River Country , painted in 1864, Bierstadt has transcribed the glorious elements that he witnessed and the serenity of an unblemished wilderness. The strong horizontals of the river, treeline and open sky are balanced by the sturdy verticals of the trees and cliffs. Although the layers of the composition help organize the painting into horizontal bands, the open view of the flatlands allows an easy movement into the landsape. The land is easily traversable, open and inviting. An almost spititual light brings to this terrain a majesty and purity lending the overall composition the feeling of a divinely inspired Garden of Eden. In the crystalline air, Bierstadt paints the details of the trees, mountains and river with an eye towards creating an utterly placid, naturalistic scene of western splendor. The intricately detailed figures, rocks and grasses of the immediate foreground carry the viewer's eye to a more hazy and suggestive distance of unending natural beauty, emphasized by the reflection of the landscape in the river. In the present painting, Bierstadt painted two diminutive figures on mules crossing the rocky terrain to contrast with the towering cliffs and the expansive landscape. Although he often chose to paint landscapes without figures, in this work, Bierstadt uses them to effectively emphasize the magnificence and power of nature while hinting at the encroaching development of the West.

A year before In Platte River Country , Bierstadt painted a masterwork of an almost identical scene. Measuring 36 by 57½ inches, North Fork of the Platte, Nebraska (1863, Manoogian Collection) is a more developed composition to which the artist has added more figures. Bierstadt has rendered additional detail in the background mountains, which similarly present the effects of dramatic light and shadow. A writer for the Post in 1863 wrote, "The 'North Fork of the Platte, Nebraska'...is a picture of broader lights and distances. Its breadth of light in the background, especially, is indeed admirable. Its rock painting is particularly vigorous. Great tabular masses of limestone, upended and broken into successive ledges--their ruin partly bold and staring, partly veiled under tender foliage--are more picturesque than any remains of British abbeys, and in the symmetry amid destruction give almost a similar suggestion of the work of man. The sky and water of this landscape are pure to the last degree." (as quoted in Albert Bierstadt: Art and Enterprise , Brooklyn, New York, 1990, p. 197)

After viewing one of Bierstadt's paintings, a writer for The Crayon commented on his success at presenting the largely unexplored frontier, "The scenery of this section of our territory has for a long time been a matter of curiosity to lovers of landscape, who have been excited yet not satisfied by the vague and contradictory reports of explorers. Through the better expression of the brush we can now form some idea of it, Mr. Bierstadt's pencil being true and too powerful to be questioned." (N.K. Anderson, "Wondrously Full of Invention: The Western Landscapes of Albert Bierstadt," Albert Bierstadt: Art and Enterprise , p. 74) Among these achievements are his two versions of In Platte River Country , which stand out in Bierstadt's ouevre for their monumentality and grandeur.

Collectors, critics and the public at large found immediate appeal in Bierstadt's expansive compositions of the American West such as In Platte River Country . These impressive works provided for Easterners a panoramic view of the West that was undergoing rapid exploration and that was the topic of considerable interest. This audience was stunned by the landscape's magnificence and they delighted in the artist's interpretation of these panoramic views. Elements seen in In Platte River Country , such as the infinite land with venerable mountains and the masterful use of light highlighting the massive cliffs and pervading the vast landscape, provided further details which Bierstadt's Eastern audience came to enjoy and to expect in major compositions by the painter. A capable promoter of his own work, notes Linda Ferber, "Bierstadt effectively appropriated the American West, tapping public curiosity and excitement about these remote national territories. This interest was fueled, even during the apprehensive years of the Civil War, by the powerful idea of Manifest Destiny. The prevalent belief that Americans were divinely ordained masters of the continent lent special significance to Bierstadt's choice of subjects." ("Albert Bierstadt: The History of a Reputation," Albert Bierstadt: Art and Enterprise , p. 25)

Bierstadt's synthesis of the broadly monumental and the finely detailed, places his work among the most successful expressions of nature. This expression, through Bierstadt's attention to detail and evocation of light, harmoniously brings together the spiritual and natural world and the suggestion of a spiritual one. Like no artist before him, Bierstadt established himself as the pre-eminent painter with both the technique and the talent to convey the powerful visual impact of the Western landscape, to capture the mammoth scale of the open spaces, and to begin to interpret this new American landscape in a manner equal to its majesty and grandeur.

In summarizing Bierstadt's achievement, Gordon Hendricks, wrote that "his successes envelop us with the beauty of nature, its sunlight, its greenness, its mists, its subtle shades, its marvelous freshness. All of these Bierstadt felt deeply. Often he was able, with the struggle that every artist knows, to put his feelings on canvas. When he succeeded in what he was trying to do--to pass along some of this own passion for the wildness and beauty of the new West--he was as good as any landscapist in the history of American art." ( Albert Bierstadt: Painter of the American West , New York, 1973, p. 10)