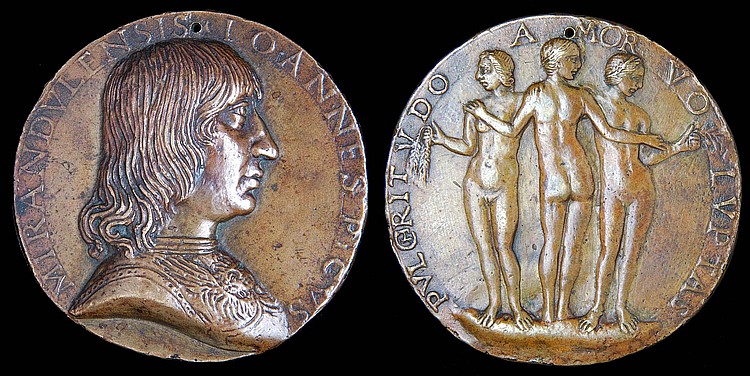 Provenance: Sotheby's Zurich, 27 May 1974, lot 48; Morton & Eden, 14 June 2007, lot 568. The existence of this exceptional and contemporary example disproves Hill's comment that the medal 'apparently only exists in after-casts' and Pollard, in describing the Washington specimen, makes mention of the present medal. Apart from Marsilio Ficino, Giovanni Pico della Mirandola is considered to be the best known philosopher of the Italian Renaissance. He was the son of Gianfrancesco Pico, count of Concordia who died while Pico was still a child; his mother, Guilia Boiardo, guided him towards his career as a philosopher. In 1486, Pico, at the age of twenty-three, published his Conclusiones. Its nine hundred theses, assembled from Christian, Jewish, Moslem and pagan sources, led to Papal disfavour, which Pico compounded by his hastily published Apologia which he dedicated to Lorenzo de' Medici. Pico fled to France, where he was briefly imprisoned, before being brought back to Florence under the protection of Lorenzo. Shortly thereafter he created scandal by abducting a young married woman. In Florence, despite the difference of many of his views, he was one of the group of neo-Platonic philosophers avidly supported by Lorenzo de' Medici. The group included Ficino (of whom, though not a student, Pico was a follower) and Poliziano and both sat for medals attributed to Fiorentino or his school. Pico later became a follower of Savonarola, and died ag d 31 (some have said by poison) on 17 November 1494, the day Charles VIII entered the city, Medici Florence fell to the French, and what remained of Lorenzo's enlightenment faded. In Scher, Currency of Fame (p. 132), Pollard is unstinting in his praise of Fiorentino: 'Niccolò is the most powerful portrait maker of the Italian Renaissance medallists. His effigies are bolder in scale, more varied, more bluntly realistic, and more personal than anything produced earlier.' Fiorentino's portrait of Pico fulfils all these criteria reflecting what some have said of the sitter, that he was the 'ideal man, whose physical beauty reflected his inner harmony.' Hill dated the medal to 1489-1490, but Pollard (2007) dates it to 1484-1485. He commented that the reverse marked the first use of the Three Graces on a Florentine medal, being later used on five other medals attributed to Fiorentino, the most important being the marriage medal of Giovanna degli Albizzi (c. 1486). The somewhat naïve handling of the reverse is fully consistent with Fiorentino's output. The model for the Three Graces is thought to be a classical prototype, the original of which has yet to be identified. Pollard noted that the identification of the Graces as Beauty, Love and Pleasure is taken from Ficino's triadic philosophy of love in De Amore, which Pico later criticized. But clearly Pico later came round to the same conclusion that 'Pleasure was the highest good of the Platonist......Love is passion (Voluptas) aroused by beauty.'