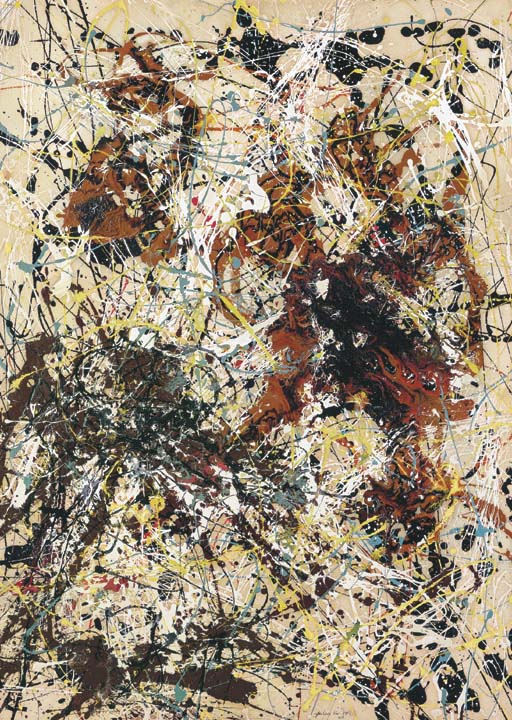 Property from The Museum of Modern Art, sold to benefit the Acquisitions Fund

This lot may be exempt from sales tax as set forth in the Sales Tax Notice in the back of the catalogue.

An important painting made at the very apex of the artist's meteoric and turbulent career, Jackson Pollock's Number 12, 1949 is a seemingly complete world onto itself. It is a self-contained cosmos in paint made out of a myriad of interlaced swirls and streaks of vibrant color that weaves a constantly moving, almost evolving, complex pattern of painterly form and energy. Painted for his third exhibition at the Betty Parsons Gallery in November 1949--the breakthrough show that would effectively launch the artist's now legendary status--Number 12, 1949 is a work that both celebrates and explores Pollock's new-found freedom and mastery of the radical "drip" technique he had originated two summers before. It is also a work that formed part of a select group of Pollock's paintings chosen for the United States Pavilion at the 1950 Venice Biennale--an exhibition which was to have a radical and transforming effect on the development of much avant-garde European art in the early 1950s. Constructed using the full range of Pollock's seemingly magical fluid painterly language, the painting manages to articulate an emotional intensity from the gossamer-like threads of the gestural drips and meandering lines of its enamel paint. Though it is not a large painting--Pollock painted very few large works in 1949--Number 12 is, nevertheless, one of the most intense and complete statements in the artist's oeuvre.

The year 1949 was to prove the most decisive and important year of Pollock's life. After two years of struggle formulating and evolving his "drip" technique Pollock and everyone around him, knew that the time was ripe, for him to assert his radical new work on a wider public. Pollock himself was in a confident and relatively stable frame of mind. Throughout the first part of 1949 Pollock settled into a simple and healthy routine at his house on Fireside Road in the Springs, East Hampton. Isolated from outside influence and the temptations of the city, Pollock worked soberly and keenly on several new paintings for his show in November.

Pollock attempted to display the full range of his control and mastery in a diverse series of works. Eschewing the almost mural-sized works of 1948, Pollock created paintings in smaller sizes and formats that he hoped would prove more accessible than his largest paintings. Number 12 belongs to a series of work painted on paper and mounted on masonite. By confining his work onto a smaller scale Pollock had to adjust, probe and re-examine his ability with the drip technique considerably. Instead of making sweeping gestures in the air with his brush the nuances of line are created with swift and elegant flicks of the wrist that prompt both finer and more dense concentrations allowing for a fuller range of painterly expression. As Number 12 illustrates, the change in scale in no way affected Pollock's prodigious mastery and control of the drip technique nor his ability to generate magical images with it. A startling degree of finesse is used in direct contrast to thicker pourings of color where two different paints have been allowed to flow into one another. These denser, seemingly more earthy collisions are echoed a thousand times over in other parts of the composition by the lighter and more frenetic splattered collisions of swiftly dripped lines of a wide variety of color and globular density. Like numerous energy-packed atomic particles asserting and establishing the paths and rhythm of their own destiny, they unite the composition as a whole into a febrile balance of seemingly microcosmic and macrocosmic form.

"States of order - Organic intensity - Energy and motion - Made visible - Memories arrested in space, human needs and motives - acceptance" were some of the descriptive notes Pollock made on his paintings at this time. "Technique is the result of a need," he had also noted to himself, "new needs demand new techniques." What was important, he asserted in these rare personal notes about his new seemingly random or chance-driven technique of using the drip, was "total control - denial of the accident." He was fearful of being wrongfully dismissed as a mere agent of automatism or worse, a Surrealist-imitator. It was of crucial importance, Pollock felt, to make the public aware that although he might enter a kind of transcendent state when he painted, whereby his actions were often prompted by the apparent demands of the painting itself, these actions and his brushwork were never left to mere chance. Since first developing the drip technique in 1947, Pollock had refined the technique and developed it to such a degree of mastery that he now claimed to know exactly where the drips would fall even after the wildest of gestural splashes. Lee Krasner remembered that "his assuredness at that time is frightening to me. The confidence, and the way he would do it was unbelievable." (Lee Krasner, "Jackson Pollock at Work: An Interview with Barbara Rose", Partisan Review 47, No.1. (1980): 82-92 p. 45.) Indeed, running contrary to the creative self-doubt that he often suffered from, at this point in his career, Pollock's self-confidence in his art was running on such a high that he confided to Krasner in all sincerity, that jazz music, particularly in the form of the Bebop of Dizzy Gillespie and Charlie Parker, was the "only other creative thing happening in this country."

Pollock's exposure in Life magazine in August 1949 under the heading "Is this the greatest living artist in the United States?" only added to this new-found confidence in the build-up to his exhibition at Betty Parsons. Eighteen of the twenty-seven paintings in the show were sold within the first week. Among the relatively few lengthy reviews of the show that appeared in the New York press, in the magazine Art News, Number 12 with what the article described as its "splurges of tiger-striped" hues, was one of only a few of Pollock's works to be singled out for praise. Number 12 was soon afterwards bought from the show by Edgar Kaufmann Jr., a scholar on Frank Lloyd Wright and a curator in the Department of Industrial Design at the Museum of Modern Art from 1940 to 1955, whose father commissioned Falling Water from Wright. The painting was later donated by Kaufmann to the Museum of Modern Art's collection in 1952.

Before it entered the Museum of Modern Art's collection however, Number 12 was one of only a few paintings by Pollock selected to hang in the United States Pavilion at the 1950 Venice Bienale where they created a sensation amongst the European avant-garde, particularly young Italian artists. Of the older generation of Italian painters was Giorgio Morandi who, walking among a group of Italian painters, somewhat caustically observed, "They're interesting these Americans, they jump into the water before they learn to swim". On seeing Pollock's work however, he exclaimed, "Now this is new. Such vitality, such energy!' (cited in Steve Naifeh and Gregory White Smith, op. cit. p. 605) Within weeks of this exhibition it was being whispered in Europe that the long awaited successor to Picasso's throne had arrived.

Jackson Pollock in his studio

Betty Parsons in the office of her first gallery, at 15 East 57th Street, circa 1953-54 Estate of Betty Parsons

On occasion, Christie's has a direct financial interest in lots consigned for sale. This interest may include guaranteeing a minimum price to the consignor of property or making an advance to the consignor which is secured solely by consigned property. Such property is offered subject to a reserve. This is such a lot

Please note this lot may be exempt from sales tax as set forth in the Sales Tax Notice in the back of the catalogue.