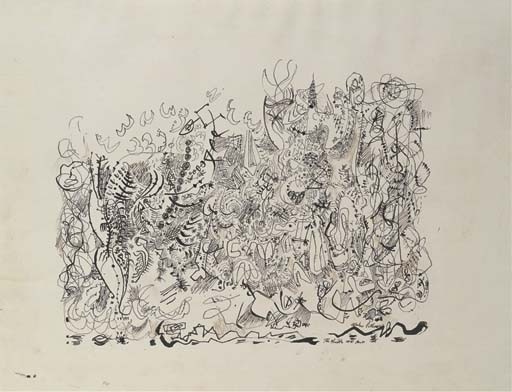 Betty Parsons, New York
Contemporary Art from the Estate of Betty Parsons, Christie's New York, 9 November 1983, lot 335
Acquired from the above sale by the present owner

Important Drawings from the Collection of Duncan MacGuigan

The winter of 1946-7 was the period of Pollock's legendary breakthrough. Departing radically from the techniques and former concepts of traditional painting, by dripping and pouring enamel paint directly onto a horizontal surface, Pollock eliminated both the Western tradition of easel painting and the concept of painting as an illusionistic picture on the world. The salient feature of these breakthrough works, apart from the new Post-Cubist spatial structure that they proffered, was the translation of drawing into painting by the fusion of draftsmanship, paint and color via a technique that was radically graphic in execution. Line became Pollock's preeminent mode of expression; dripped and poured, it became both the means and the object of his work; indeed the very act of drawing became synonymous with painting.

Given Pollock's obsession with draftsmanship, his drawings share a special affinity with his paintings. Beginning from 1944, his works on paper reveal a quest to fuse the two modes of expression when he began to squeeze gouache directly from the tube onto the paper and create "painterly tangles" out of his pen and ink scrawls. Furthermore, he began to free his line from subservience to the image, letting it be dominated by movement alone. In his drawings of this period, we witness the struggle of line beginning to break free from delineation. In essence, Pollock's twin but contradictory ambitions for a total visual effect and symbolic figuration are exposed in these works. Line describes figures, but at times dissolves them to become totally abstract allover rhythms that force the figures "underground", beneath a seemingly incoherent web.

In allowing line some volition to move, change direction and randomly invent its path, Pollock was greatly aided by the Surrealist technique of automatism. He had been exposed to Surrealism in the late 1930s and while in therapy had been encouraged to employ automatic drawing as a means of releasing "unconscious" imagery. Greatly influenced by the Jungian idea of conjuring archetypal images from the collective unconscious, Pollock probed his subconscious as a source for his art through the technique of free association. Indeed, many of his "veiled" images become particularly resonant of this process seemingly revealing totemic and often tormented imagery liberated from the depths of his psyche.

Pollock admitted his debt to the "European moderns", particularly Pablo Picasso and Joan Miro for introducing the unconscious as a vehicle for artistic creation. While Picasso's mythological characters morph into often recognizable Jungian totems and symbols in Pollock's drawings of the late 1930s and mid-1940s, Miro's exploration of Cubist structure, biomorphic form and abstract mode of Surrealism became a stronger presence in his work in the mid-late 1940s. Automatic linear elements used by Miro (especially in his Constellations series) and Paul Klee were of particular importance in Pollock's development.

The untitled drawing dated 1947, reveals burgeoning details of Pollock's iconic mature style. The consolidation of isolated forms into a centralized compositional mass with clear margins on all four sides displays his predilection for a centrifugal structure and allover composition in his subsequent paintings. While line describes forms redolent of plant and animal life and symbols, it begins to assume independence, extending itself from specific figurative elements to encompass the surface. One senses the onset of absorption into its fluid and rhythmic configuration. The fantasized figurescape becomes subsumed into a panoramic pictorial field in which no one point gains importance over the other. The possibilities of what Pollock was on the point of achieving in his large-scale paintings are revealed in this drawing.

Executed on the eve of his drip paintings, the present drawing straddles figuration and abstraction, space and flatness, but reveals Pollock on the cusp of achieving his major artistic breakthrough.