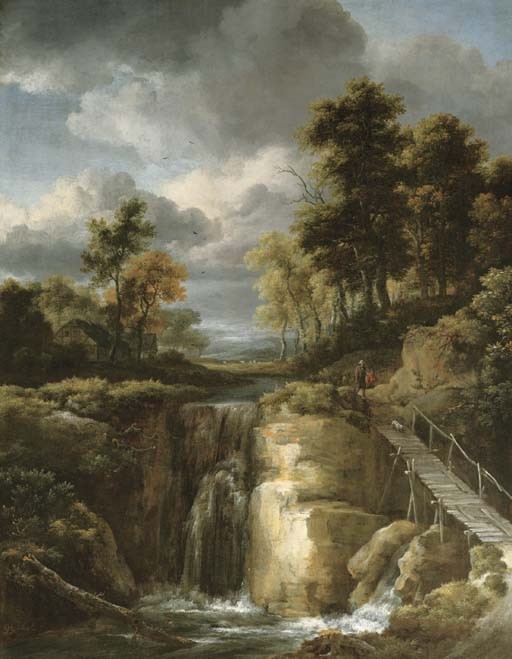 Ruisdael's earliest biographer, Arnold Houbraken, reveals in his De Groote Schouburg der Nederlantsche Konstschilders en Schilderessen of 1718-21, that amongst Ruisdael's most popular [and expensive] paintings were those depicting waterfalls. Houbraken noted that the artist 'could portray water slashing or foaming as it dashed on the surrounding rocks so naturally, so tenderly, that it seems to be real water'.

The present painting combines the influence of the Allert van Everdingen's Scandinavian landscapes, characterized by unspoilt natural elements, with that of a more modified and controlled Dutch landscape evidenced by a wooden bridge connecting the banks, the staffage of animated figures and a farmhouse with a flock of domestic animals.

The present work is datable to the 1670s. It was during this period in his career that Ruisdael made the most extensive use of the vertical format in varying sizes. Comparable compositions of the same type are Wooded landscape with a Sluice at a River Bank in the Museum of Art, Toledo and a painting of similar format and size, River Scene with a Waterfall sold at Sotheby's, New York, 11 January 1996, lot 41 ($772,500).