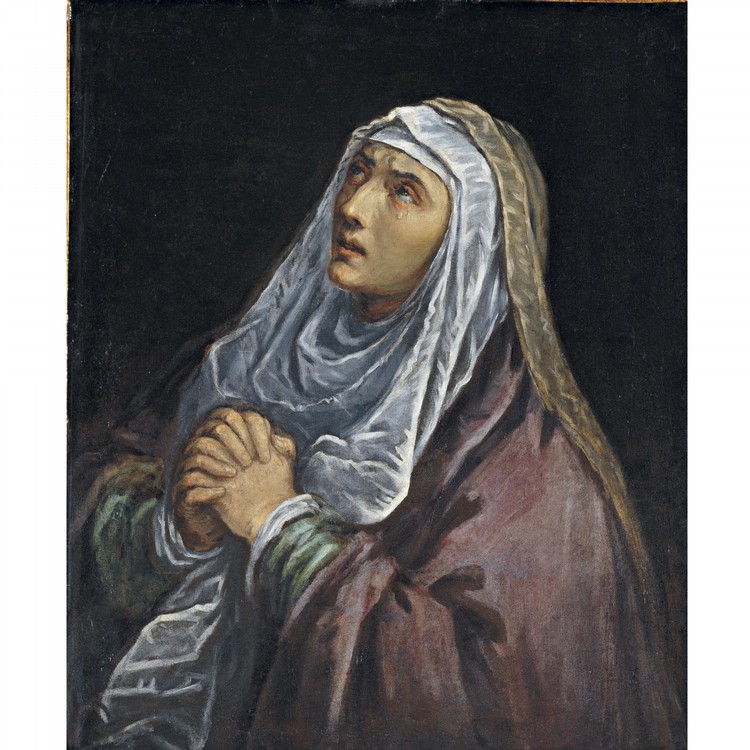 Prof. Alessandro Ballarin, to whom we are grateful, believes this picture to be an important addition to Jacopo Bassano's oeuvre. On the basis of photographs Prof. Ballarin dates the painting to a late phase in the artist's career, that is to circa 1580.

This intensely moving image of the Mater Dolorosa owes much to Titian, not only in its subject and format but also in its expressive painting technique. The figure of the Madonna is shown clasping her hands and weeping, looking up as if towards the crucified Christ, and though her glance makes reference to something outside the picture space this painting is a self-contained study of grief and despair. The picture appears to be unique in Bassano's oeuvre, both in format and iconography, but Titian had already painted variations on the theme of the Mater Dolorosa in the 1550s and '60s, and it is likely that Bassano knew the older artist's works. Titian had painted numerous renditions of the subjects Mater Dolorosa and Ecce Homo, both in the same half-length format, and these were either conceived as pendants or paired later: the most famous amongst them were those of 1564, known through Bertelli's prints and numerous 16th-century painted copies (see H.E. Wethey, The Paintings of Titian. I. The Religious Paintings, London 1969, pp. 88-9, cat. no. 35, reproduced plates 218 and 219). Although both Titian and Bassano's Madonnas clasp their hands in despair, the latter's grief is given a more outward expression by the lifting of her head and, by removing any hint of a halo or aureole, she is made to look like any mother mourning the death of her son, thus underlining the religious message and the universality of grief.

The heightened emotion in this picture is further emphasised by Bassano's painterly technique. Like Titian, Bassano's late works are characterised by their remarkable modernity and the artist's astonishing capacity to renew his painting technique, largely achieved by his complete mastery of the paint medium. Bassano was famed as a colourist but his later works display a more muted palette and the brushwork itself becomes a powerful means of expression. Carlo Ridolfi spoke of Bassano's different styles: his youthful phase, colourful and inspired by the works of Bonifacio de' Pitati and the young Titian; his mannerist phase, influenced by the engravings and drawings of Parmigianino; and his late phase, described as his "ultima maniera fatta à colpi", characterised by its vigorous brushwork (C. Ridolfi, Le meraviglie dell'arte ovvero le vite degli illustri pittori veneti..., Venice 1648, p. 394). In a manuscript of 1685 the Bassano-based painter and critic Giambattista Volpato wrote that Jacopo's late works were painted in "lume serrato"; that is with the light source enclosed in a paper lantern. This serves to heighten the chiaroscuro effects and without direct natural light the forms become gently shaped by the shadows: the drapery folds of the Madonna's veil here, for example, are defined as much by their highlights as they are by their shadows. A good comparison is provided by the folds on Saint Apollonia's sleeve, painted around the same time and on a similar scale, in Bassano's altarpiece of 1580 showing The Madonna and Child with Saints Agatha and Apollonia in the Museo Civico, Bassano del Grappa (inv. 24; see P.Marini, in Jacopo Bassano c.1510-1592, exhibition catalogue, Bassano del Grappa, Museo Civico, September 5 -- December 6, 1992, pp. 542-3, cat. no. 122, reproduced in colour).