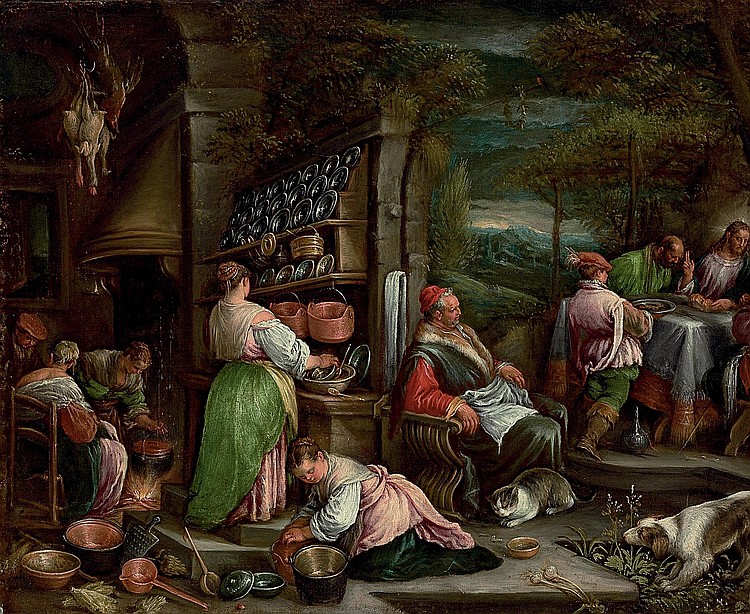 Possibly Nicolas Renier, Venice, in whose possession a picture of the subject by Jacopo Bassano is recorded by C. Ridolfi, Le meraviglie dell'arte..., Venice, 1648, I, p. 395.
The Earls of Erne, Crum Castle.

No VAT will be charged on the hammer price, but VAT at 17.5% will be added to the buyer's premium, which is invoiced on a VAT inclusive basis.
Please note Payments and Collections will be unavailable on Monday 12th July 2010 due to a major update to the Client Accounting IT system. For further details please call +44 (0) 20 7839 9060 or e-mail [email protected]
This is the finest extant version of one of the most popular compositions evolved by Jacopo Bassano, who had first treated the subject at the outset of his career, in 1537, in the canvas in the Cathedral at Cittadella. This composition, the importance of which was first recognised by Alessandro Ballarin, was plausibly linked by the late Roger Rearick with other scenes from the Bible evolved about 1576-7 in which there is a strong genre element: like these it can be seen as an Italian counterpart to the works by such northern artists as Pieter Aertsen. R. Echols and F. Ilchman ('Les Pélerins d'Emmaüs et la Fête Biblique', in the catalogue of the 2009-10 exhibition, p. 270) follow Rearick's dating and note that the picture is generally considered to be one of the earliest versions and may be the first of the type.

In this and the related composition of Christ in the House of Mary and Martha Jacopo collaborated with Francesco, the most individual of his sons, who had a particular bent for genre painting. Rearick argued that Jacopo Bassano laid in the design, which was then completed by Francesco. Jacopo himself then worked up all the figures, with the exception of the seated innkeeper, and also retouched the horizon. Rearick believed that the only version signed by Jacopo alone was a replica largely executed by his younger son Leandro, who was too young for his contribution to be acknowledged in a joint signature. The very numerous replicas painted in the studio of the Bassano, evidently over a period of some decades, testify to the success of a composition of which this picture is the most authoritative known version and may very well have been the prime original.