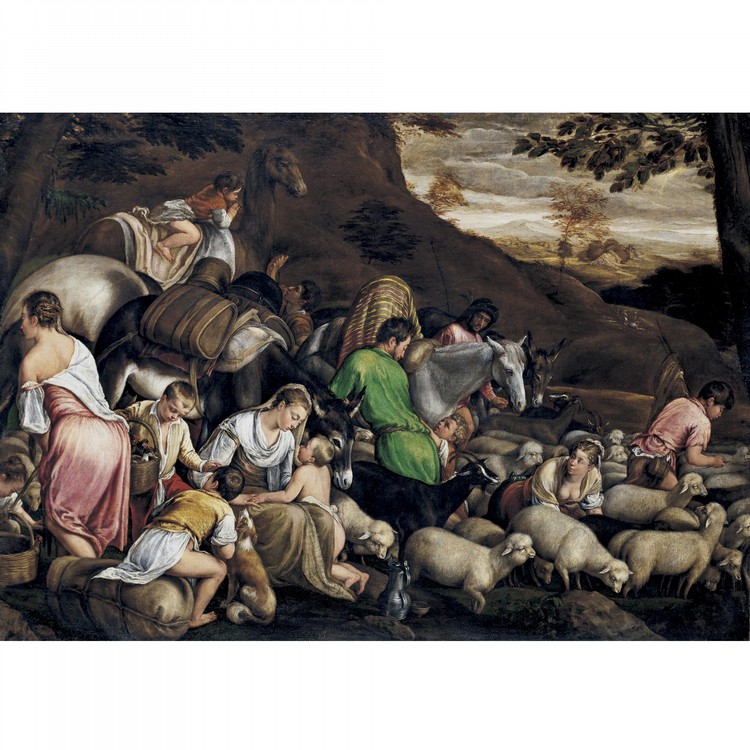 Numerous opinions have been set forth regarding the attribution of the present painting. Most recently, it has been suggested that it was painted in collaboration by Jacopo and his son Francesco. However, Ballarin (see Literature below) considers this to be a studio replica of the Hampton Court painting while Rearick suggests that it is a studio variant that was mostly painted by Francesco and retouched by Jacopo (see Rearick Literature below).

The subject, somewhat rare to the modern viewer, must have been easily recognizable to Jacopo's contemporaries and was in fact a very popular subject at that time. The subject , however, had been confused for decades due to an erroneous old catalogue description of the collection of Charles I of England where the painting was entitled "Abraham". In that story, Abraham, aged seventy-five, went to Canaan accompanied by Sarah and Lot (Genesis 12:1-5). Whereas in the story of Jacob's Journey (Genesis 31: 17-21) the Bible tells of a younger man, in the prime of his life, accompanied by his wives Rachel and Leah, his children and his livestock. The iconography in the present composition and in the related versions is clearly more closely related to the story of Jacob than that of Abraham.