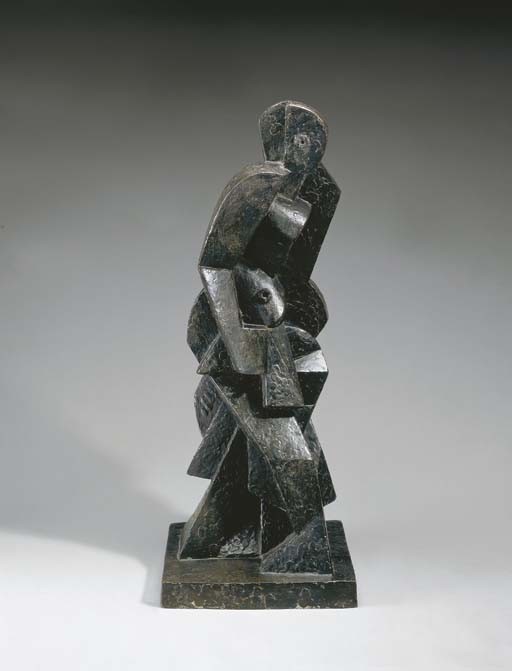 Baigneuse
signed, marked with artist's thumbprint, and numbered 'J Lipchitz 4/7' (on the top of the base); stamped with foundry mark 'MODERN ART FDRY NY' (on the back of the base)
bronze with brown patina
Height: 34 3/4 in. (88.3 cm.)
Conceived in 1917 and cast at a later date

Otto Gerson Gallery, New York.
Acquired from the above by the present owner.

Property from the Collection of Lee V. Eastman

For over 30 years, Lee Eastman was a central figure in the New York art world. During his lifetime he had witnessed the city's ascent from provincial backwater to world art capital; and in his special role both as sometime legal advisor to artists and as passionate collector of their works, he had befriended many of the painters who had brought about this metamorphosis, including Hans Hofmann, Mark Rothko, Franz Kline, Robert Motherwell, and, above all, Willem de Kooning.

His collection, which had been put together painstakingly over many years, with moderate means, became justly famous, both for its consistently high quality and for its legendary holdings of works by de Kooning. Christie's is privileged to offer 24 superb works by this artist in our sales of Post-War and Contemporary Art on November 8th and 9th, ranging from exquisite drawings and gouaches of the 1940's and 50's, to major sculpture and to great oil masterpieces of the 1970's. These are accompanied by equally judiciously chosen works by de Kooning's peers, including a powerful Kline oil of 1960, a beautiful oil on paper by Rothko of the same date, Motherwell's iconic Spanish Elegy#122, an early Guston oil, two constructions by Joseph Cornell, and many others.

Lee Eastman's connoisseurship extended equally to the great 20th century European masters, including Matisse, Giacometti, Lipchitz and, not least, Picasso, who was such a formative influence on the young de Kooning. Important works by these artists and others from the Eastman collection will be offered in Christie's Impressionist and Modern Art sales on November 1st and 2nd. Picasso is brilliantly represented by many works, including his searing small portrait of Dora Maar of 1939, Buste de Femme; by his Atelier of 1955, a vivacious interpretation of his studio interior at La Californie in Cannes and by one of the small gems of the Eastman collection, his 1937 drawing of Père Ubu, with its remarkable poem by the artist.

The collection was rich in sculpture as is demonstrated by the great Matisse bronze, Grand nu accroupi (Olga) of 1909-10, an abstracted portrait of the Russian painter Olga Meerson, as well as by two important cubist Lipchitz bronzes, one of 1917 the other of 1928. Of particular interest, too, are the important bronzes by Giacometti, one a transitional early head, Isabel I (L'Egyptienne), an elegant portrait of the young Englishwoman, Isabel Nicholas, conceived in 1936, the other a profoundly moving and exceptionally fine portrait bust of his brother Diego, conceived in 1957.

On a personal note, my old collection books record that I first contacted the Eastmans in December of 1973, shortly after I had moved to New York; and that they were gracious enough, on January 4th 1974, to invite me, a complete stranger, to the first of several enthralling and stimulating tours of this magnificent collection. I am honored to be involved, nearly 32 years later, in steering so many wonderful works of art from this great pioneering assemblage into the hands of a new generation of buyers, all of whom will owe a debt to Lee Eastman's collecting zeal and to his intelligent and incisive eye.

In the winter of 1916 Lipchitz signed a contract with Léonce Rosenberg, the brother of the dealer Paul Rosenberg and a former specialist in antiquities, who had acquired an interest in cubism and had recently founded his Galerie de l'Effort Moderne. He sought to represent those artists who were formerly affiliated with the dealer Daniel-Henry Kahnweiler, who, as a German national, was forced to leave France at outbreak of the First World War and was then living in exile in Switzerland. Rosenberg arranged to pay Lipchitz three hundred francs a month and cover his expenses, in exchange for his output of sculptures.

While Lipchitz remained in debt, he now had some measure of financial security for the first time in his life. He could now afford to work in stone, and in 1917 he began to cast in bronze as well. Now expressing himself in absolutely durable and permanent materials, Lipchitz undertook an important series of seated and standing figures, concentrating on the theme of the bather. The earliest figures in this group are seated, such as Baigneuse assise (Wilkinson, no. 59); these have a powerful and static aspect which Lipchitz associated with Egyptian art. In the subsequent standing figures, such as the present sculpture, Lipchitz introduced a sense of dynamism and movement. He later recounted:

In the next three pieces, two bathers [W. 61 and the present sculpture] and a singer with guitar [W. 66], all made in 1917, I am consolidating some of the ideas involved in this new phase. In all three there is the sense of twisting movement, of the figure spiraling around an axis. There is the massive monumentality I was now seeking... All three are intricate works, highly complex in the manner in which the figures are built up of many different are built up of many different interacting elements, but all still maintaining the rigid control of the block of stone. I was seeking effects that were both rich in their complexity and controlled in their simplicity. Once again I believe that these evoke the living human figure into which the forms were translated, while maintaining the purity of those forms.
(in My Life in Sculpture, New York, 1972, pp. 46 and 49).

In addition to drawing on a formal vocabulary pioneered by the cubist painters Picasso, Braque, and Léger, with whom he maintained in contact through Léonce Rosenberg, Lipchitz now drew his inspiration from a wider range of sources. He wrote: "The bathers, observed from different angles, are even reminiscent of traditional portraits of bathers as seen in the history of sculpture from ancient times through the eighteenth or nineteenth centuries. Bather [the present sculpture] is conceived as a bather stepping down to a pool or a river, holding her drapery as her head turns back over her shoulder. This is a pose suggestive of certain eighteenth-century bathers by Falconet and other sculptors of the time" (ibid., p. 49).