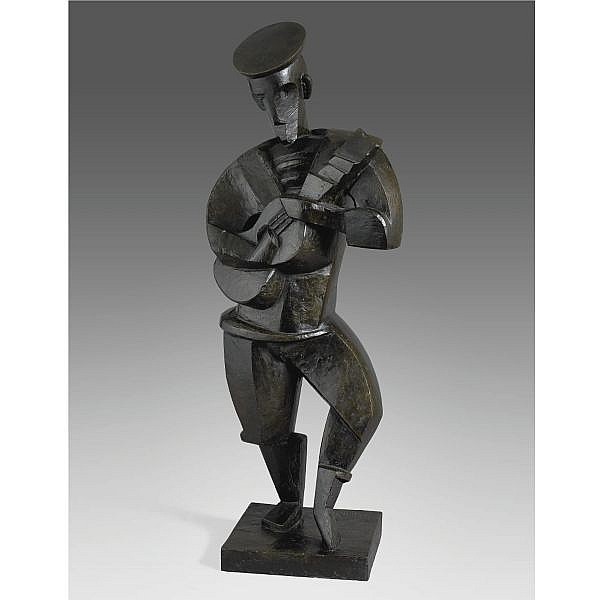 Conceived in 1914 and cast before 1939 in Paris. Inscribed with the signature J. Lipchitz, dated 14, and stamped Bronze and with the foundry mark Valsuani cire perdue Bronze

Jean-Claude Bellier, ParisAcquired from the above by the present owner at the beginning of the 1970s

The authenticity of this work has kindly been confirmed by Pierre Levai.
PROPERTY FROM A FRENCH PRIVATE COLLECTION
The present work is one of Lipchitz's best known Cubist sculptures, created in 1914 at the beginning of the war. That summer, Lipchitz travelled to Spain with Diego Rivera and other friends and, caught by the outbreak of the war, stayed there for six months, only returning to Paris at the end of the year. It was during this time that he conceived Sailor with Guitar, inspired by a man he observed on the island of Majorca. Having witnessed a scene of a young sailor dancing around a pretty girl and playing the guitar, he made several drawings of this subject, and executed clay and plaster models of the sculpture on his return to Madrid. The present cast is also one of the rare bronzes among his oeuvre that was actually cast in Paris not long after he created the original plaster. As a Russian immigrant who was just making his way in the Parisian art world, Lipchitz could not afford to pay the foundry fees in his early career. On occassion, however, he convinced the Valsuani foundry to cast a small number of his most impressive works with the promise of payment at a later date. Only one or two bronze examples were cast from these plasters, and the rest of the edition was cast after he immigrated to the United States in the 1940s. According to Alan G. Wilkinson, those bronzes cast in Paris are often dated and usually not numbered, as is the case of the present work. When the edition of Le Marin à la guitare was completed in New York at the Modern Art Foundry, the remainder of the bronzes were numbered as part of an edition of 7. Alan G. Wilkinson discussed the present work and its place in the development of Cubism: "Sailor with Guitar marks a radical departure in Lipchitz's working method, in what he called "the final step toward cubism." While he maintained that the sculpture retained a degree of realism, true to the actual appearance of his subject, Lipchitz also recognized the crucial difference in approach from his previous work: "I was finally building up the figure from its abstract forms, not merely simplifying and geometrizing a realistic figure." Or, as he put it another way: "all the elements of the body derive from different cubist shapes." In a tentative, exploratory manner, Lipchitz was moving in the direction of Synthetic Cubism, in which abstract forms were the point of departure, leading to and ultimately suggesting the subject matter. [...] What gives Sailor with Guitar its historical importance in the evolution of Cubist sculpture is the shift from a dependence on starting with perceived reality to the freedom of working from the imagination toward the subject matter" (Alan G. Wilkinson, in Jacques Lipchitz. A Life in Sculpture (exhibition catalogue), Art Gallery of Ontario, Toronto, 1989, p. 68).
A.M. Hammacher described the origins of this work: "In 1914 Lipchitz made toreador figures, dancers and the important Sailor with Guitar. This last was the result of his watching with amusement and fascination a sailor with a guitar dancing around an attractive girl. Years later he could still remember the sailor's trousers rolled up above his knee and his cap at a jaunty angle, details from a reality that passes over into the unreality of a spatial image, in which memories disappear, anatomy no longer exists and curves, straight lines and taut planes exert a mutual influence on each other and form a totally new organism. The guitar has become a centre, a nodal point of forms, which meet each other there and which together determine the total play of light and shadow on a free, rhythmic basis" (A.M. Hammacher, Lipchitz in Otterlo (exhibition catalogue), Rijksmuseum Kröller-Müller, Otterlo, 1977, n.p.) The plaster cast of the sculpture is in the Rijksmuseum Kröller-Müller, Otterlo. Other bronze casts of this work are in the following collections:
The Albright-Knox Gallery, Buffalo
The Barnes Foundation, Merion
Musée National d'Art Moderne, Centre Georges Pompidou, Paris Philadelphia Museum of Art
St. Louis Art Museum
Private Collection (sold: Sotheby's, London, February 5, 2007, lot 36)