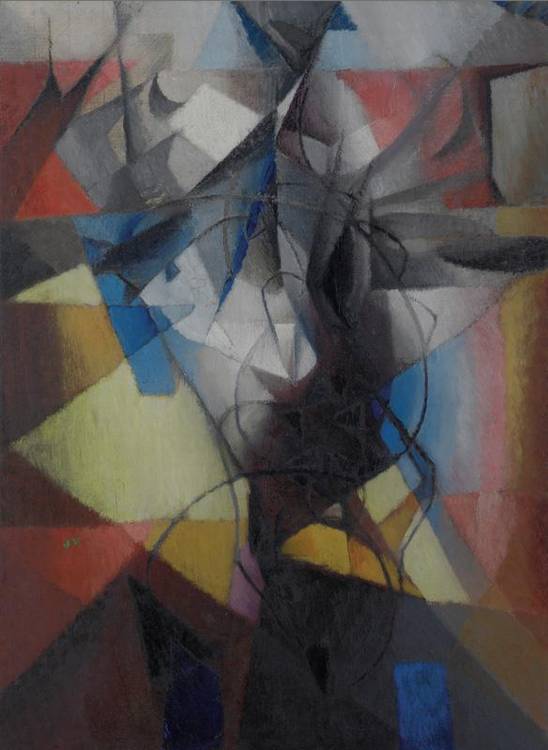 Signed with the initials JV (lower left); signed Jacques Villon and titled on the reverse

PROPERTY FROM THE ESTATE OF RUTH G. HARDMAN

Jacques Villon completed L'Acrobate in 1913 during the one of the most important phases of his career. His work from this period embodies an aesthetic that combined elements of Cubism and Futurism, both movements of great cultural importance during the years immediately preceding the First World War. Like his younger brothers Raymond Duchamp-Villon and Marcel Duchamp, Villon was an insightful and progressive artist, often choosing subjects that challenged the norms of visual representation. One of the best examples of this artistic goal is the present work, a two-dimensional representation of an acrobat in motion.

Villon's first attempt at rendering this theme was in 1897, when he completed a lithograph called Danseuse de corde for a Parisian periodical. In 1912-13, he returned to the subject in three drawings depicting an équilibriste balancing on his hands. Like Degas, Villon was fascinated with the depiction of movements performed by dancers and other stage performers. But as he progressed as an artist, his concentration shifted from representing the physicality of the figure to trying to capture the energy of motion itself. This achievement is the defining characteristic of the present work, in which the figure's limbs, torso and head are no longer visible in the swirl of motion.

Daniel Robbins has written the following about this painting, and addresses Villon's skill at rendering the complexity of movements inherent in the acrobat's performance: "For the acrobat Villon renounced the mass he had so carefully carved out in the Renée series of 1911, and instead visualized energies alone - the acrobat's dextrous movements pitted against the force of gravity. In L'Acrobate and the Petit équilibriste etching, he did this by pure linear arabesque overlaid on a concentration of triangular planes. The surrounding space is suffused with energy that emanates from the center of the picture: for the first time in a work of Villon an environment is suggested in completely abstract terms" (Daniel Robbins, Jacques Villon (exhibition catalogue), Fogg Art Museum, Harvard University, Cambridge; Roy R. Neubereger Museum, Purchase, New York, 1976, p. 74).

Impressionist and Modern Art, Part One