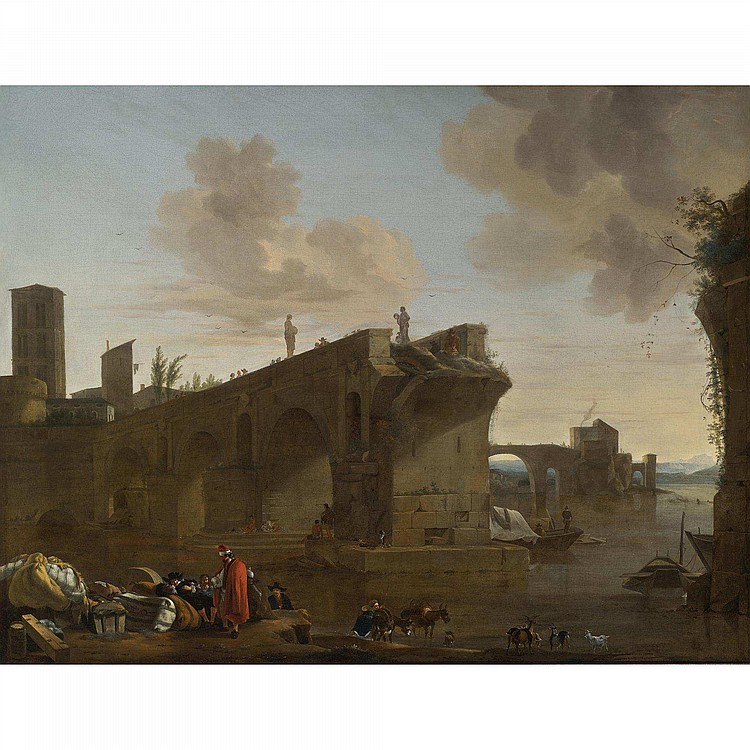 ROME, A VIEW OF THE PONTE ROTTO
signed with monogram and dated lower left, on the crate: 1652 / JA

Asselijn painted several further depictions of the Ponte Rotto (originally the Pons Aemilius, built 179-142 B.C.), the earliest dated version being from 1644. (1) The present lot has most in common with the 1650 dated version in the C.L. David collection, Copenhagen, being of broadly the same dimensions and being composed along almost identical lines, although with the addition here of a group of goats in the lower right foreground, bathers in the river, and two statues on the bridge. Another (unsigned and undated) version, not recorded by Steland, has recently come to light in a private collection in Rome, which depicts the bridge from the same viewpoint but includes different staffage. (2) There are two related drawings (both pen, ink and grey wash), one formerly in the collection of F.C. Butôt (3) and the other in the Rijksprentenkabinet, Amsterdam. With this latter, which renders the upper right section of the bridge, the present lot shares most compositional elements, although the drawing omits the two statues and incorporates the two figures that lean over the wall (one in a wide-brimmed hat), further to the right.

Note on the Provenance
This painting was acquired in 1756 by the noted English patron and collector, Simon Harcourt, 1st Earl Harcourt of Stanton Harcourt (1714-1777). The only son of the Hon. Simon Harcourt (1684-1720) of Stanton Harcourt, Oxfordshire, and his wife Elizabeth, granddaughter of the diarist John Evelyn, he succeeded to the family's estates and titles on the death of his grandfather, Simon Harcourt, 1st Viscount Harcourt (1661-1727), and shortly thereafter set out on an extensive Grand Tour, which was to last for four years. He held a number of posts in the royal household - even acting briefly as tutor to the future George III - and was created 1st Earl Harcourt by George II in 1749. He reached the rank of general in the army and served as ambassador in Paris (1768-72) and lord Lieutenant of Ireland (1772-77). His interests in the Arts were diverse: he was one of the founder members of the Dilettanti Society in 1732 and assembled a notable collection of pictures. (4) He commissioned portraits from Reynolds (5 )and Knapton, was a patron and friend of Paul Sandby, and collected numerous Old Masters, including important works by Poussin: Moses purifying the Waters (now Baltimore, Museum of Art) and Mars and Venus (Boston, Museum of Fine Arts). In 1756 he drew up plans for a Palladian villa to be built overlooking the Thames at Nuneham Courtenay near Oxford. The villa was designed and built by Stiff Leadbetter from 1756 to 1764 and much of the interior decoration was carried out by James 'Athenian' Stuart. Harcourt died by falling into a well at Nuneham, from which he had been trying to save a favourite dog. His eldest son, George Simon, 2nd Earl Harcourt, enlarged the family's collection and commissioned Lancelot 'Capability' Brown to remodel the House and Park (1781-82).

Describing the Drawing-Room After his visit to Nuneham in 1856/7 ('on the walls of this agreeably-proportioned apartment, which are hung with crimson silk, the pictures have a beautiful effect') Waagen noted, amongst other paintings, the two Poussins and the present lot ('Jan Asselyn-A very large landscape, with a broken bridge, and buildings.... An important work, but placed too high').
.