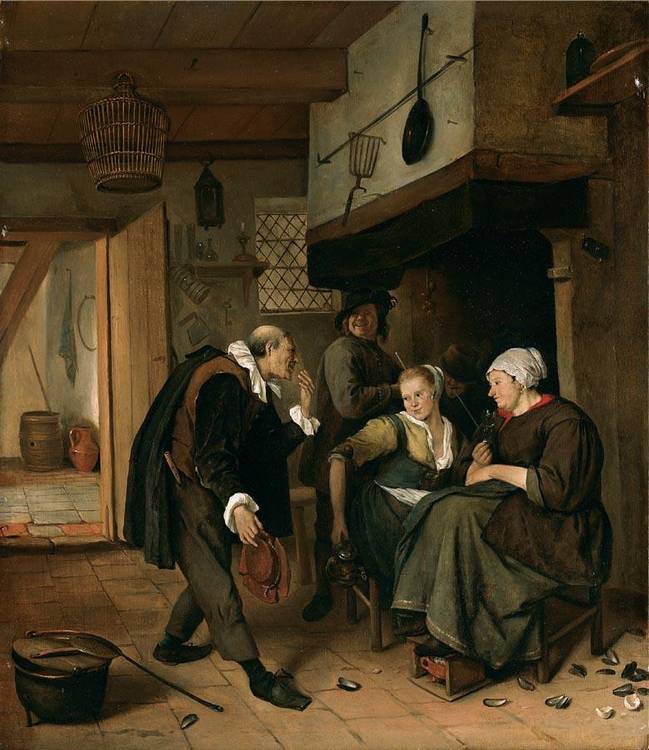 PROPERTY FROM THE COLLECTION FORMED BY ENRICO FATTORINI, SOLD BY ORDER OF THE TRUSTEES OF HIS DAUGHTER, THE LATE MRS MARGARET NAYLOR

Jan Steen's paintings are rarely without the dramatic tension of an arrested moment - here the elderly man caught in the middle of an exaggerated bow, which the young woman turns to observe, and which has just caused the man with "Jan Steen" features to grin. A moment earlier, or a moment later, the scene depicted would look quite different. Thus the theatrical character of Steen's paintings captures human failings in flagrante delicto, so to speak, and thus allows the painter to make fun of them. Whether these are comments or merely commentaries is an open question - Jan Steen mocks human folly, but his comic treatment of it seems to set criticism aside. Jan Steen's pictorial language is as much a verbal as literary one, since his paintings are peppered with references to Dutch proverbs, emblematic traditions and puns.

The comical elderly figure making the theatrical bow to the young woman who turns to observe him is, as Sturla Gudlaugsson observed (see under Literature), dressed as the Commedia dell'Arte figure of Pantaleone. The flute projecting from his trouser pocket is a tool of his trade as an itinerant entertainer, and an obvious emblem of his mockingly lustful intent. The flute, fluit in Dutch, is a pun, revealed in the old proverb: "De vooglaer, op bedrieghen uyt, den vogel lockt met soete fluyt" (The bird-catcher, who seeks to deceive, will try to lure the bird with his sweet flute). Voogelaer has a double meaning: as well as the bird-catcher it also means someone who seeks to deceive for his own good. Veughelen, "birding", is a thinly veiled reference to fornication, one which would have been instantly recognised by all in Jan Steen's day. That the young woman is in danger of spilling wine from the spout of the jug that she holds, seemingly forgotten, in her right hand is doubtless also an allusion to the sexual incontinence which is in the air. That moral standards are in imminent danger of collapse is due, as it often is in Jan Steen's paintings, to alcohol and tobacco: the slack muscles in the face of the maid who turns and the glassy-eyed expression of the older woman beside her suggest that they are both the worse for wear. The discarded mussel shells reinforce the sense of disorder and of loosening of standards.

Above the elderly jester hangs an empty birdcage, which may also refer to the Dutch verb veugelen. Steen painted a similar birdcage in many other paintings, for example 'The Dancing Couple' painted in 1663 (National Gallery of Art, Washington, Widener Collection) and the 'Twelfth Night', dated 1668 (Staatliche Museen, Kassel). Both paintings also show the same sort of Commedia dell'Arte figure. The Kassel picture in particular shows a remarkable resemblance; beside wearing the same Pantaleone costume, he plays a rommelpot, to emphasize his role as a fool who is after the attention of the comely girl.

As in so many of his works, Jan Steen has here included a caricature of his own features in the face of the amused peasant who turns to observe the comic encounter behind him.

Both De Vries and Braun (see Literature) date this picture circa 1665, after Jan Steen had settled in Haarlem.

A copy in oil on paper, en grisaille, in the National Gallery, London (fig. 1), was once attributed to Jan Stolker, but it is too weak for him. Stolker's mezzotint, which is more detailed than the copy, probably derives directly from the Fattorini picture, but the National Gallery picture may have served as the basis for Paul/De Wilde's mezzotint.

This lot and the Jacob van Ruisdael (lot 22 in this sale) share the same provenance from before 1893, when both works were in the collection of George Field, until now. Both were bought in the Lord Swaythling sale in 1946 by Duits, who bought no other lots in the sale, and who was probably buying on behalf of Enrico Fattorini.