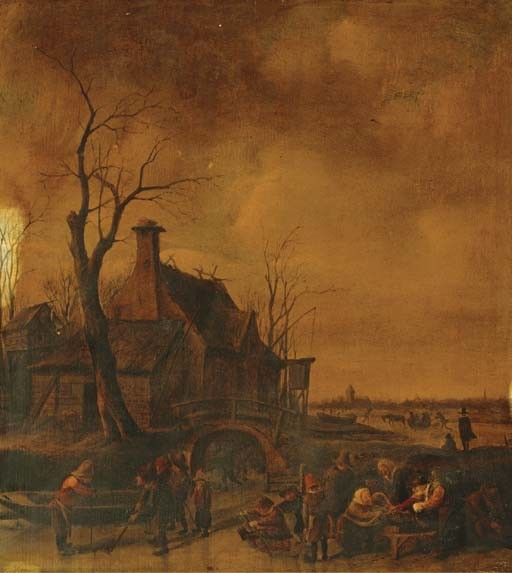 Underneath this dramatically darkened and reddish varnish is a beautiful early winter scene by Jan Steen. In it children play on the frozen canal in front of a humble house, wielding kolf sticks and pushing one another along the ice. A fishmonger does brisk business at the lower right as a horse drawn sleigh speeds past in the background. The various windows that have been opened reveal the care with which Steen painted this scene: the delicacy of the tree branches, the looseness of the brushwork, and the silvery tonality of the sky all position this painting among his earliest works, when his primary interest was landscape and his model was Isaack van Ostade (1621-49), particularly his winter scenes of the 1640s.

The present painting is unusual for its upright orientation and most likely dates from around 1650, when the young Steen seems to have painted winter scenes for the open market with great success. Indeed, a winter scene at Skokloster Castle in Belsta was bought at a sale in 1651 for the Swedish governor-general of Pomerania, for the not insignificant sum of 32 guilders. Other similar compositions include Fair near a riverside village (private collection) and Winter pleasures (on the London art market 1964, present location unknown). Few of Steen's winter landscapes seem to have survived as many are more are listed in contemporary sales catalogues than exist today.

Jan Steen was born in Leiden in 1626 to an upper middle class Catholic family. He was the oldest son of a brewer and grain merchant and most certainly attended the Latin school, as he was enrolled at the age of twenty in Leiden University's faculty of letters. He never seems to have graduated from university and, on 18 March 1648, was registered as a master-painter in the Guild of Saint Luke. No records of his apprenticeship and training exist, but both of Steen's eighteenth century biographers, Arnold Houbraken and Jacob Campo Weyerman, place him in the workshop of landscape painter Jan van Goyen (1596-1656). A document of 13 October 1649 records Steen's marriage to Van Goyen's daughter, Margriet, in The Hague and the couple appears to have remained in The Hague until 1654, when he is recorded on a number of occasions in Leiden. During the same year, Steen leased a brewery in partnership with his father in Delft. The explosion of Delft's powder magazine in 1654 and a steady decline in the city's brewing industry led to financial difficulties for the artist and in 1657 he took up temporary residence in Leiden. From 1658, Steen and his family lived in Warmond, a village north of Leiden, and by 1660 had moved to Haarlem. Margriet died in Haarlem in 1669 and the artist was left to care for their six children. Steen moved his family back to Leiden in 1670 and there he served as for the next two years as headman and, in 1674, was elected dean. Steen remarried in 1673 and, according to Houbraken and Weyerman, spent most of the rest of his life smoking and drinking with his artist friends, Lievens, De Vois, and Van Mieris. He died in Leiden in 1679 at the age of 53.