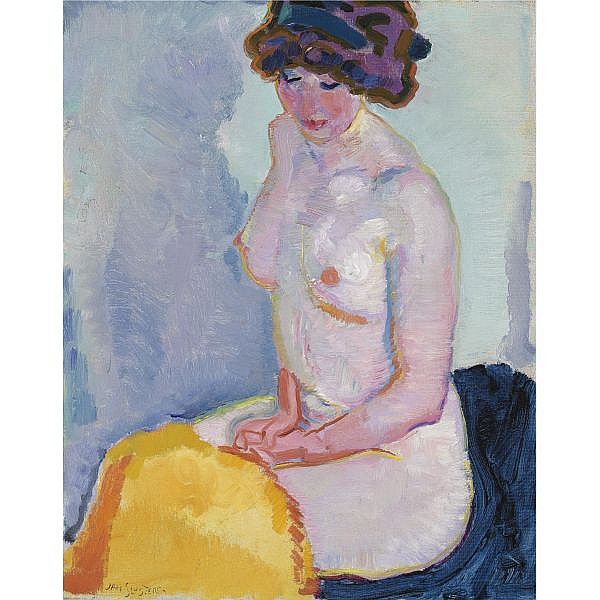 Painted in 1909-1910.The present lot will be included in the forthcoming catalogue raisonné on the artist's work, currently being prepared by the Netherlands Institute for Art History (RKD) in The Hague
PROPERTY OF THE DESCENDANTS OF A PRIVATE COLLECTOR
1909 was an important year for Jan Sluijters. He exhibited in the Stedelijk Museum in Amsterdam together with the painters Cees Spoor en Piet Mondrian. This exhibition was characterized by the art critic Conrad Kickert as 'Demonstratie van de Ultramodernen' (Demonstration of the Ultra Modernists) because the artists introduced a new style. This new style, luminism, thereafter began to win ground.[1] One could say that this movement is a follow-up of pointillism, a style where light and colour are also the most important characteristics. Luminist use of colour is indeed strong and pure, however in contrast to pointillism it is applied in broad brushstrokes and more expressionist. During this exhibition another life-changing event took place. Sluijters met the four years younger woman Greet van Cooten. At that time he was married to Bertha Langerhorst who had just given birth to their daughter, Louise, the year before. His love for Greet must have been very strong as that same year they went to live together. During his career Sluijters would portray many women but the portraits of Greet are very distinct as they clearly show his profound love for her. The results of these two important events come together in this lovely work. Sluijters portrayed his precious Greet in a highly luminist style. It was painted in 1909-1910 which is seen as the climax in his luminist period. The bright colours pink, blue and green are applied separately in broad brushstrokes. He sets Greet against an empty background, paints a contour around her body and an aura which makes her not only stand out but also renders her radiant and glowing. Sluijters' female nudes were sometimes found offensive and shocking due to the far reaching naturalism and sensuality. In this nude however, one can not accuse Sluijters of being provocative. Greet sits with her eyes cast down and her head slightly turned away which gives her a shy and soft look. The portrait is tender and delicate and again we are witness of the young romance that existed between these two people. At that time this was also noticed by Just Havelaar, an art critic who wrote a book on Sluijters. He calls him a psychological impressionist who used his internal emotion to depict the outside world. Especially in his portraits and depictions of nude women and nursing mothers Sluijters knew how to portray the human drama. He even wrote: "Zolang hij niet psychisch ontroerd is, weet hij met heel zijn picturaal talent niets uit te richten. [...] Hij is niets, hij is een banaal academicus, een bravour-kunstenaar, wanneer de hartstocht hem niet doorbruist, wanneer de hartstocht niet zijn kleuren branden doet." "As long as he's not psychologically moved, he can not use his pictorial talent. [...] He's nothing, a common place academic and a bravura artist when passion does not sparkle through him, when the passion does not make his colours burn".[2] Today's opinion agrees with Havelaar and not with art establishment of that time. Paintings by Sluijters from this period, especially those depicting nudes in burning colours, are the most sought after from the modern classicist period. Illustrating this is the portrait of Greet from 1910 and a luminist nude seen from behind from 1911, both sold in our rooms in 1995 and 1997. Paintings by Jan Sluijters executed around 1910 are not frequently offered for sale and this painting presents a rare opportunity to acquire such a typical and high quality work of this period. [1] Ina Ewers-Schultz, 'Het Hollands luminisme' in: exh.cat. Meesters van het Licht: Luministische schilderkunst in Nederland en Duitsland, Zwolle 1999, p. 55 [2] Jacqueline de Raad, ' Het 'schildersbeest' en zijn critici' in exh. cat.: Jan Sluijters: Schilder met Verve, Zwolle 1999, p. 151