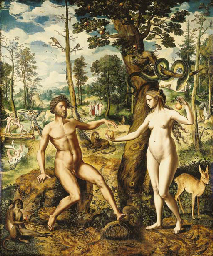 The Temptation, with the Rebuke and the Expulsion from the Garden of Eden beyond oil on panel 78 x 65 in. (198.1 x 165.1 cm.) PROVENANCE E. Knocker. T.P. Grange, Esq., London. LITERATURE B. Wallen, Jan van Hemessen. An Antwerp Painter between Reform and Counter Reform, Ann Arbor, Michigan, 1983, figs. 94-95. P.C. Sutton, Dutch Art in America, Washington, 1986, p. 155. NOTES There are few concrete facts around which to soundly construct the life and influences of the Dutch artist, Jan Swart van Groningen. He first emerged as a tangible figure in the art of the woodcut and it was in this context that he was referred to as 'one of the glories of our school' by Karel van Mander, who equally admitted to never having seen a single painting by Swart's hand. He seems to have come to Antwerp from the Northeast as a young man, probably around 1520 (Friedl„nder, Early Netherlandish Painting, XIII, New York and Washington, 1975, pp. 13-16), the same time that Drer is known to have been in the Netherlands. In his woodcuts and drawings, which were often designs for stained glass and tapestries, Swart reveals his debt to the South German printmakers and to Drer in particular, whose work was frequently the inspiration or model for his meticulously rendered landscapes that team with naturalistic detail (see, for instance, Drer's Adam and Eve of 1504 (Hollstein 1) where the two figures are set against a deep forest with numerous animals positioned in the middle distance and at their feet; and St Eustace (Hollstein 60) where the praying saint is accompanied by his pack of hounds). Like the wildlife in the present work, Drer's animals are an important component of the pictorial narrative. Van Mander records that Jan Swart visited Venice, and certainly his sojourn in Italy seems to have been highly influential on his overall compositional style. In the present work, the elongated figures are frozen in complex poses and are firmly inserted in the rhythmically animated terrain. Their gestures and relationships suggest a knowledge of Raphael. The muscular figure of Adam, seated on a bank of earth and with arm reaching out for the forbidden fruit, recalls the same figure in Raphael's Adam and Eve of 1509-10, in the Stanza della Segnatura in the Vatican, Rome. Eve, shown by both artists with left hand raised, is transformed from Raphael's voluptuous seductive maiden into an earthy temptress by the Dutch artist. Of equal importance to the development of Swart's figurative style was his encounter with Jan van Scorel, who returned from Italy to Antwerp around 1525. After his Italian trip, van Scorel peopled his compositions with figures adapted directly from compositions by the great Renaissance artists of Rome and Venice. For instance, his Cleopatra of 1521-1524, in the Rijksmuseum, Amsterdam, recalls Palma Vecchio's 1510 Venus, now in the Gem„ldegalerie, Dresden, while his Saint Sebastian of 1542 (Boymans-van Beuningen Museum, Rotterdam) can be directly related to a figure from Michelangelo's Last Judgement of 1541 in the Vatican, Rome. In determining a plausible date of execution for the present work the influence of the Antwerp Mannerists must also be seen as playing an integral part of the development of this artist. If it was predominantly Drer who influenced the intense detail of Swart's foregrounds, it was the Antwerp artists, Dirk Vellert and Jan van Scorel, whose billowing styles helped form the looser handling of his middle and backgrounds (see for instance, Van Scorel's Baptism of Christ, 1528, in the Frans Halsmuseum, Haarlem). In true Netherlandish style, the narrative in the Minneapolis Adam and Eve continues through a series of episodic scenes peopled by figures of ever decreasing scale. There are few paintings by Jan Swart which have been convincingly dated, but Friedl„nder ( op. cit. p. 15) postulates a date of around 1528 for his St John the Baptist Preaching (Alte Pinakothek, Mnich). The present work is closer in style to The Miracle of the Loaves and the Fishes in the Gronigen Museum voor Stad en Lande, Groningen, which Friedl„nder suggests may have been painted just prior to 1528. It seems likely, therefore, that the present painting was executed in the latter part of the 1520s.