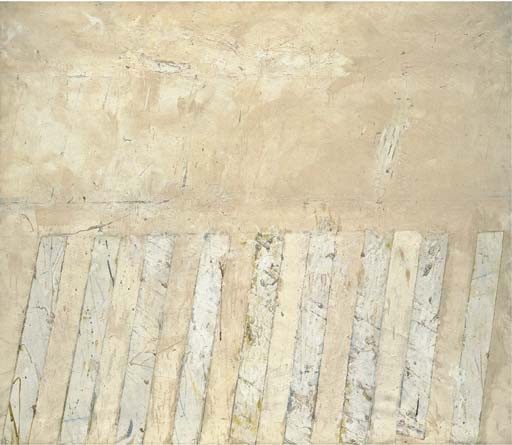 Private Collection, Italy.
Galerie Karsten Greve, Cologne.
Acquired from the above by the present owner.

Painted in 1961 Untitled is one of Kounellis' earliest paintings. Consisting of a white painted background over which sign-like strips of card have been collaged onto the surface, this painting, echoes, in an abstract way the signage and so-called 'alphabet' paintings that Kounellis had exhibited one year earlier at his first one-man exhibition at the Galleria La Tartaruga in Rome in 1960.

These early paintings represented Kounellis' attempt to integrate solely elements of the real world into his painting. Inspired by the mystical extension of painting made by Malevich's Suprematist abstraction and adopting a Manzoni-like achromatic white ground as his base, Kounellis sought to establish a synthesis between painting and reality and between material and idea through the introduction of real elements onto the painted canvas. These were moves that anticipated his later addition of living elements such as horses, a live parrot or caged birds into his still predominantly painterly art in the mid-1960s.

In this work Kounellis has eschewed the overt realism of the letters, numbers and even arrow signs of his other paintings for the more obscure but still real but essentially abstract calligraphy of diagonal strips as a means of punctuating and animating the bare canvas ground. Fundamental to this work is its sense of painterly texture. Echoing the 'Number' paintings of Jasper Johns, the 'White' paintings of Robert Rauschenberg who had also held an important exhibition at the Galleria La Tartaruga in 1959 and the tactile surface of the Rome-based Cy Twombly's paintings, this work articulates the arena of painting as one emptied of artifice and illusion. A tabula rasa, it is, Kounellis suggests, the platform on which a theatre of the real can and should be built.

'The work of a painter is to free something without imposing it, because, if you impose it you've liberated the thing, but not a person. What is crucial for a person, for you, or, I don't know, for everybody, is that freed thing, at all costs. The artist must remain unwavering and not inflict it violently later, because, otherwise it might be accepted but it won't be understood or it'll only vaguely be understood. It won't come alive, while a painting can have a real, living, extreme meaning, and this is what must be understood' (J. Kounellis, quoted in interview with C. Lonzi, reproduced in Marcatré, Rome 1966, p. 134).