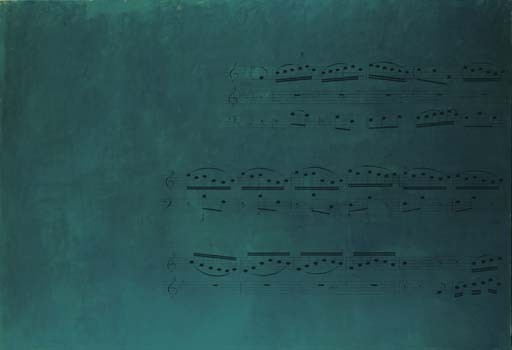 Private Collection, Germany.
Hans Meier, Dusseldorf.
Thomas Amman Fine Arts, Zurich.
Acquired from the above by the present owner circa 1993.

PROPERTY FROM A SWISS COLLECTION

'In the 1960s, I was designated as an 'artist' because no-one knew how to define a heap of coal. But I'm a painter, and I lay claim to my initiation in painting because painting is the construction of images, it doesn't indicate a manner, even less a technique. Each painter has his own way of seeing and methods of constructing an image, and the common approach which consists of associating traditional art with the word 'painter' and an anarchistic, modern and experimental role with the word 'artist' is ridiculous. Jackson Pollock was a painter who reinvented the American space with morality. Mexican murales are paintings, Duchamp himself was a painter. Liberalism has given painting freedom as far as the imagination can go, and has re-endowed the artist with a fully intellectual role.' (Jannis Kounellis in exh. cat., L'Élémentaire, le vital, l'énergie: Arte Povera in Castello, Vence, 2004, p. 57)

Untitled of 1971 is one of an extraordinary group of memorable and ground-breaking works in which the artist's oft-stated insistence on being first and foremost a painter is formally demonstrated through the integration of painting and performance. Executed in 1971, Untitled is a large dark green monochrome painting on which a fragment of musical notation has been painted. When first exhibited at the Modern Art Agency in Naples, the three-metre wide painting was 'accompanied' by a cellist repeatedly playing a fragment of J.S. Bach's 'Passion according to St John'.

This communion of performance and painting was a clear reference to and an extension of the ideas Kounellis had expressed in his earliest 'word' and 'alphabet' paintings when the artist had first introduced fragments of pictorial and literary language into his art. In his 1964 painting Petite for example, in addition to the word 'petite' Kounellis had in fact included a line of musical notation as an indication of the cypher-like ability of the fragment to evoke a wider sphere of language and experience. In the same way that he had accompanied some of these early word and 'alphabet paintings' with a performance dressed in an elaborate Hugo-Ball-inspired costume, in the performance at the Modern Art Agency, Kounellis sought again, this time through this painting/performance/installation, to invoke a sense of disparate unity through the fragmentary. Integrating the notes of the painting into the real space of the viewer through the sonic but also temporal medium of performed music, the painting and the performance must have seemed for a moment to unite the apparently separate mediums of space and time. In doing so, in invoking a sense of a hidden communion between two disparate entities and media, the combined work exudes a profound sense of a mysterious poetry being revealed. Infusing the gallery space, it also invokes that strange sense of nostalgia for a unified language of the arts that Kounellis' work often hints at - that higher idealised arcadian 'language' of Mediterranean yore - a language often dreamed of but arguably, one that has never existed.

Alone, the painting also stands as a powerful and evocative fragment. A vast deep green vista of colour, with its short broken lines of musical notes punctuating the void of its surface like a sequence of dancing figures, the apparent isolation and arbitrariness of these musical notes suggests both displacement, loss and nostalgia. Not only does the fragment inevitably speak of the whole but, in spite of the absence of the accompanying musical performance indeed, perhaps even more so because of it, in Kounellis' hands, the conventions of the language of painting are extended out of the confines of pictorial space and into the realm of everyday reality.

In sporting the notes that are to be played in the cellist's performance the painting and the performance are not just echoes of one another but they are expressions of a similar sense of isolation and longing. The repeatedly played fragments of the Bachfuge seem to yearn for the whole, at the same time, lost in this shadowy and misty green void, the notes that pictorially represent this music, edged at the right-hand side of this painting, also seem to yearn for completion. When brought together into a performance painting installation, they tautologically complete one another in a work of mimesis that speaks of the ultimately fragmented nature of modern culture. Isolated and alone, as it has been, on the numerous occasions when it has been exhibited as a leading example of both Kounellis' work and of Arte Povera, the painting seems to speak as potently but perhaps more anxiously of the same.