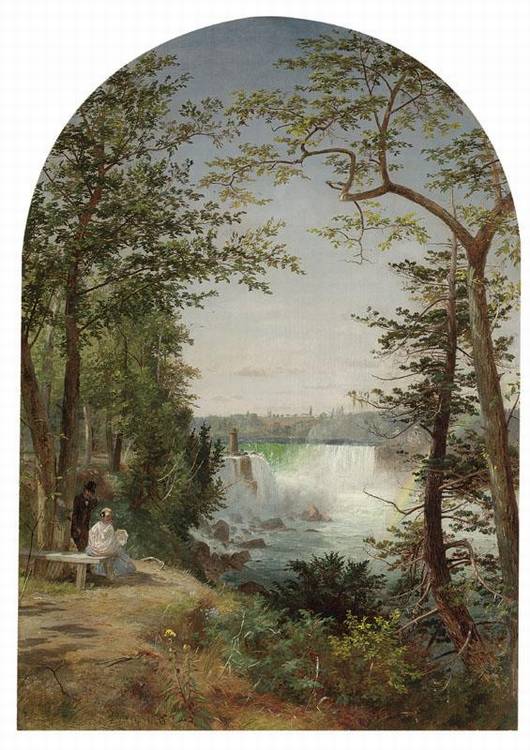 PROPERTY FROM THE COLLECTION OF JO ANN AND JULIAN GANZ, JR.

Jasper F. Cropsey's visits to Niagara Falls in 1852 and 1855 inspired a number of canvases, which he completed between 1856 and 1863. The present painting is the largest and most impressive of these representations. Cropsey's return to the subject reflects both his affinity for the site about which he wrote, "This sublime nature about me constantly moves my soul in admiration of its creator" (quoted in Talbot, p. 391) and Niagara's popularity as one of America's most easily recognized natural wonders. Niagara Falls was an appealing subject for several of the major artists of the day; in addition to Cropsey, Frederic Church and Albert Bierstadt painted major canvases dealing with the theme. Cropsey chose a unique point of view, placing the monumental falls in the background and focusing on two figures enjoying the scenic wilderness on the American side, looking toward Canada.

William Talbot observed, "Subtle purples, greys and blues provide atmospheric tones in the sky while the rainbow to the right is faint and delicate. ... The figures to the left, which have substantial scale..., create a definite mood to which the foreground contributes. The unusual vertical format of the picture was noted soon after its arrival in America [from England where it was painted from sketches the artist took with him], when it was called '... a novel view of that very hackneyed subject, Niagara Falls'" (Talbot, pp. 160-61). Cropsey shows us the grandeur of nature as it was experienced by the throng of tourists who increasingly visited the site.

Niagara Falls was considered important enough to be acquired by The Brooklyn Institute (a predecessor of The Brooklyn Museum), which purchased the painting from the artist in May 1862 for $195 according to Cropsey's account book.

This painting will be included in the forthcoming catalogue raisonné of the artist's work in preparation by The Newington-Cropsey Foundation, Hastings-on-Hudson, New York.