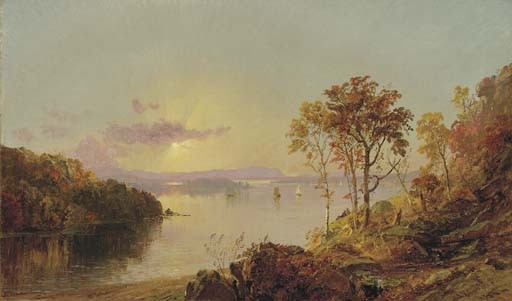 Jasper Cropsey's 1874 work, Figures on the Hudson River, is a splendid example of the artist's gift for meticulously rendering the light and atmosphere of an autumn afternoon. In this work, Cropsey reveals "the two sides of the complex philosophical debate that engaged many nineteenth century landscape painters: the importance of the real versus the ideal in the representation of nature." (E.M. Foshay, Jasper F. Cropsey: Artist and Architect, New York, 1987, p. 19) Cropsey presents the viewer with a serene late afternoon landscape. The distant hills and reflections are painted in subdued tones of lavender, pink, yellow and blue and highlights of white indicate a series of small sailboats scattered along the river. In the right foreground, the artist has subtly placed two figures who rest on the hillside engaged by the overwhelming surrounding presence of nature. Each element of the lanscape has been articulated with Cropsey's characteristic meticulous attention to detail.

The inspiration that Cropsey found at Lake George and Greenwood Lake is once again championed in this work which demonstrates the artist's "desire to capture both the visual and affective qualities of the changing seasons. The undisputed beauty and infinite variety of nature in America inspired Cropsey and other artists of his generation to observe it closely, explore it, make sketches of sites and details, and, ultimately, canonize it in large-scale paintings. These paintings were a tribute to the potential of America's landscape, as a reflection of its creator, to bring its inhabitants closer to God and to help forge a national identity sanctified by this connection." (Jasper Francis Cropsey: Artist and Architect, p. 18)

This painting will be included in the forthcoming catalogue raisonné of the works of Jasper Francis Cropsey by the Newington-Cropsey Foundation, Hastings-on-Hudson, New York.