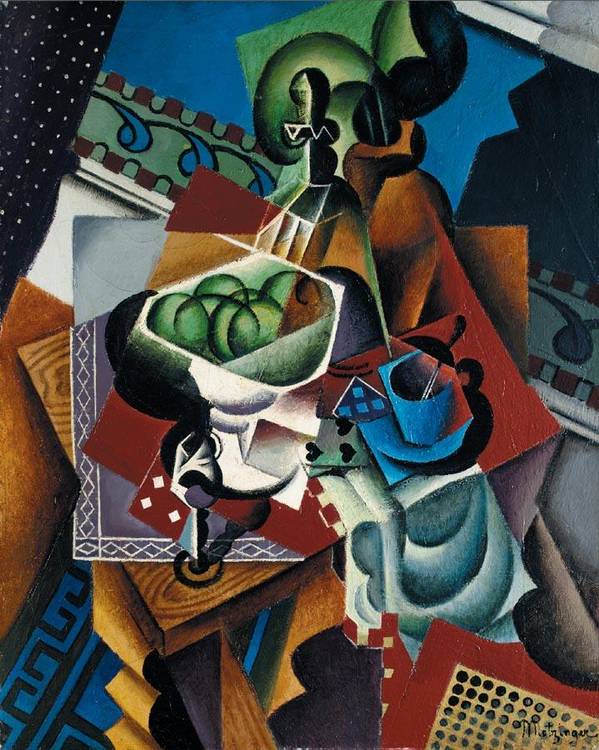 To be included in the forthcoming Metzinger Catalogue raisonné being prepared by Bozena Nikiel.

PROPERTY FROM A PRIVATE SPANISH COLLECTION

Metzinger played a key role in the establishment of a distinct Cubist movement. He exhibited in the Salon des Indépendants of 1911, and in the following months published a series of interviews and magazine articles defining the Cubist style. Famously, Metzinger was 'the first to write of the fact that Picasso and Braque had dismissed traditional perspective and felt free to move around their subjects, studying them from various points' (John Golding, Cubism: A History and an Analysis, London, 1959, p. 27).

In Du "Cubisme", an essay published with Albert Gleizes in 1912, Metzinger proclaimed: 'To establish pictorial space, we must have recourse to tactile and motor sensations, indeed to all our faculties. It is our whole personality which, contracting or expanding, transforms the plane of the picture. As it reacts, this plane reflects the personality back upon the understanding of the spectator, and thus pictorial space is defined: a sensitive passage between two subjective spaces. The forms which are situated within this space spring from a dynamism which we profess to dominate. In order that our intelligence may possess it, let us first exercise our sensitivity. There are only nuances. Form appears endowed with properties identical to those of color. It is tempered or augmented by contact with another form, it is destroyed or it flowers, it is multiplied or it disappears' (translated in Robert L. Herbert (ed.), Modern Artists on Art, New York, 1986, p. 8).

The present work is a stunning embodiment of the principles set forth in Du "Cubisme". Among Metzinger's finest works, it was painted late in 1917, a moment when he 'became much more interested in bold patterning and decorative detail, and was more likely to integrate typography into the composition [...] Small circular forms, representing pipe bowls, bottle openings, cup rims, clocks, fruit, or simple dot patterns, unite various areas of the composition, at times suggesting witty visual puns, such as eyes or olives' (Jean Metzinger in Retrospect, (exhibition catalogue), op. cit., p. 45).

Like its companion piece painted the same month (fig. 1), Nature morte has its composition anchored in a ravishing still life. In reference to Cézanne, whom Metzinger greatly admired, this arrangement juxtaposes a bowl of apples, soda siphon, smoking pipe, coffee cup, spoon and playing cards on a faux wooden table. 'He who understands Cézanne', the artist believed, 'is close to Cubism' (quoted in Robert L. Herbert, ed., Modern Artists on Art, New York, 1986, p. 4). Yet in its wallpaper, carpets, tablecloth, tiled floor and spotted curtain, Nature morte speaks the radically up-to-the-minute language of Cubism.